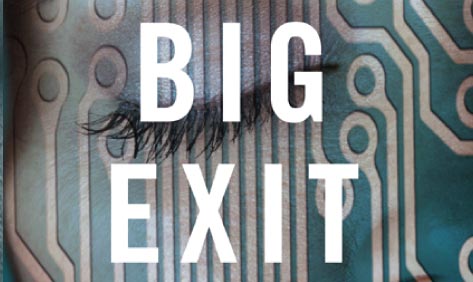 David Carnoy’s new novel, The Big Exit, begins with the transcript of a 911 call.

Hill:  He didn’t have a pulse.  There’s blood everywhere.  Oh my God.

911 dispatcher: Ma’m, are you in a safe room?  Are you in a room where the door can be locked?

Hill:  No, I’m outside near the garage….

In this jolt of an opening, we seem to hear the flat tone of the dispatcher alternating with the near-hysterical voice and panicked breathing of the caller.  Carnoy has a perfect ear – for many varieties of jargon as well as everyday speech – and throughout this tense novel he often turns the reader into a listener.  Soon the voices of jaded cops, cynical lawyers, trash journalists and assorted lowlifes will draw us further into an occasionally bewildering drama.

Beth Hill has arrived home to find her husband facedown, dead.  “You got about a five-inch gash there,” the laconic coroner on the scene tells Detective Sergeant Madden, “Looks like the killer came almost straight down.  So I gotta say a hatchet – or something like it.  But the wounds to the face were made with a blunt object.”  The word “Hack” is scrawled near the corpse identified as Mark McGregor,  “a programmer turned entrepreneur who later got a big payout when his online-payments company was swallowed up by an enterprise firm.”  Yes, this is Silicon Valley.  McGregor’s latest venture, we learn, was “…a new platform…bringing multilevel marketing to geo-location advertising.”

Yes, David Carnoy is a tech expert.  He largely spares us such details, however, preferring to root his plot in human not high-tech impulses, specifically love and money.  Mostly money.  ” A million bucks,” Beth Hill sneers, referring to McGregor’s life insurance policy, “Big deal.  I’m going to kill him for that kind of money?  I don’t think so.  I could marry that in five seconds.  Easy.”

Beth is not only McGregor’s widow, she is also the ex-girlfriend of McGregor’s friend Richie Forman and the murder motive seems to lie in the past shared by these characters.  Seven years earlier, all three were in the car that caused a fatal collision.  Richie, found drunk and unconscious at the wheel, denied that he had been driving but was convicted and imprisoned. McGregor got rich and married Beth.  Now, not long after Richie’s release, McGregor is found dead.  “They either thought they had him nailed,” Richie realizes when the police detain him, “or they thought they almost had him nailed but were missing the hammer and were hoping he’d give it to them.”

Never mind that Richie is a Sinatra impersonator; this unnecessary gimmick doesn’t intrude on a plot that becomes engrossingly complex as evidence – now uncovered, now overturned – seems to indict first Richie, then Beth, then McGregor himself.  The snap and wit of Carnoy’s language freshens familiar types: the celebrity lawyer, the manic cyber journalist, the cynical babe.  His grip weakens only towards the end, when predictable action takes over and characters start explaining the plot to each other.  The big exit of the title, it turns out, is far less interesting than the novel’s small dramas.