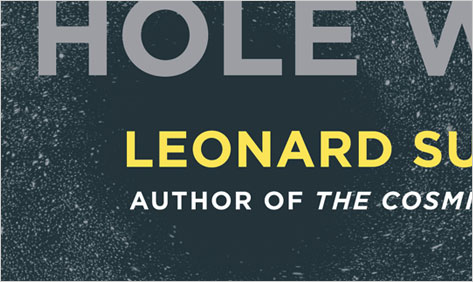 A vivid and fascinating case in point is Leonard Susskind’s The Black Hole War, freshly available in paperback after its well-received 2008 hardcover debut.

At the core of this stimulating volume is an arcane but easily statable controversy of nearly 30 years’ duration:  is information (in the technical, Shannonesque sense) utterly and forever destroyed by black-hole ingestion?  This simple yet deep question, full of dramatic implications for all of physics, involves everything from string theory to brane theory to holographic models of the cosmos, all of which, plus much more, is laid out in Baedecker-lush detail by Susskind, whose window-pane prose and Holmesian logic foster epiphanies in the reader in nearly every chapter.

Susskind is no dispassionate journalist but rather an insider and participant in this “war.”  Facing a mighty antagonist in the form of Stephen Hawking, Susskind chronicles their intellectual battles with zest and not a little arrogance of the victor (for the current consensus on the topic favors Susskind’s camp).  His ultimate description of Hawking as a tragic figure of diminished abilities, finally forced to concede defeat, should forever dispel the  stereotype of scientists as ice-water-veined brainiacs.

But Susskind never allows the emotional components of the battle to cloud his delivery of the facts and theories.  He arrays the cliffhanger developments of three decades, along with just the right amount of backstory, in the  deft manner of a novelist, proving himself a born storyteller whose unconventional troupe of players just happens to consist of gluons and photons against a scrim of Anti de Sitter Space.