The Blindness of the Heart 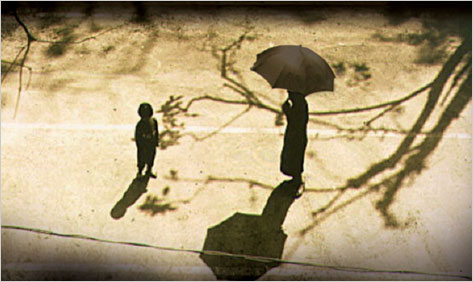 In its original German, thetitle for The Blindness of the Heart is Die Mittagsfrau,or “The Noonday Witch,” invoking a folktale about a witch who appearsin the heat of the afternoon to steal children from their distracted parents.In the prologue of Julia Franck’s book, a child is not stolen but abandoned byhis mother in a train station. Dramatizing a decidedly German civilianexperience of World War II, the novel tells us of the mother’s life before andduring the war, in hopes of explaining her act of abandonment.

Themother’s name is Helene, and in the first chapter we’re taken back in time toher childhood during World War I. Franck’s heroine lives under the watch of herolder sister, Martha, who sexually molests her in the bed they share at night.Themes of victimization course through the novel, progressing from subtle toaggressive after the sisters move to Berlin. Emotionally abandoned by Martha,Helene falls in love with a good man named Carl, but he is quickly dispatchedby a tragic accident. Excellently rendered into English by Anthea Bell,Franck’s description of Helene’s desperate loneliness cuts to the bone withdevastating effect. Men, in particular, are dangerous predators, takingadvantage of her isolation; when an older man tries to rape her, Heleneimagines her body as an anatomical model, “a torso where the heart beatwithout any head, without the capacity to think. Limbs had lost their meaningwith their function.”

Helene’sinability to protect herself reflects the impotency of the German nation,victim to Hitler and his evil regime. In a powerful scene after Helene has beenabandoned by her eventual husband because she is half-Jewish, she and her sonPeter go foraging for mushrooms in the woods and come upon an escaped prisoner.Unraveled by his wild-eyed stare, Helene stumbles off, watching Peter look forher from afar. “Helene stuffed mushroom after mushroom into her mouth. Hownice it was to be alone, chewing in peace.” She must remove herself fromthe glare of the prisoner—his face is a mirror in which she sees herself. Thisencounter is the straw that breaks the camel’s back: a few days later Helenewill take Peter to the train stain and abandon him there—bringing us back tothe events of the prologue.

ThoughHelene is closer to us than any other character, the novel is written in thethird person, and Helene grows more and more detached as the war rages on. Herobservations become eerily similar to ours, like a reader looking into anarrative he or she cannot control. Helene’s heart is not blind; it’s numb. Thenovel is not a justification of her actions, but something more complex—aportrait of the unheroic but human need for escape.