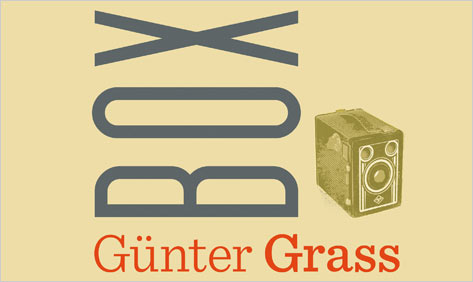 There’sa famous, and famously long, word in German for “coming to terms with thepast.” Vergangenheitsbewältigunghas long been associated, at least where literature is concerned, with authorslike Heinrich Böll and Günter Grass, and the latter’s newest book is noexception. But the past that Grass seeks to work through in The Box: Tales from the Darkroom is less Germany’s than that of his own family, orat least a fictional facsimile thereof. Told largely through the voices of hiseight children as they recall their lives at the margins of their father’screativity, The Box picks up whereGrass’s memoir Peeling the Onion abruptly left off—with his life as a writer and afather.

The conceit thatstructures The Box—and it is aconceit—is that of an Agfa Special box camera that the children believe hasmagical properties. Throughout their respective upbringings, across multiplehouses under the eyes of multiple mothers, their father’s friend and faithfulassistant Marie—Mariechen in the German diminutive—would carry the camera,documenting not only every turn in their childhoods but also their innermostdesires and imaginings. The Boxinhabits a fluid space between fiction and memoir (not least, the children’snames are fictionalized and the narrator-cum-patriach goes unnamed altogether).The conversations between the children were, we’re told, recorded over thecourse of several dinners, but it’s impossible to know where Grass’s memoryends and fantasy begins. Perhaps they’re one and the same. Whether capturingsomething as unlikely as a dog’s solitary journeys throughout the Berlin metrosystem or, no less implausibly, a “proper family” together at anamusement park, the camera gives them what their father never could: “OnlyMariechen has the ability to suspend and reverse the natural course of time. Suspicionscaptured in snapshots. Longings pursued and pounced on by a box that had somescrews loose but could reveal hidden states of affairs.”

Grass’s works tend to begoverned by a central organizing metaphor: the box camera in The Box, the onion in Peeling the Onion, the tin drum in… youget the idea. These metaphors have their uses—they lend a kind of mysticism tothe ordinary—but Grass’s repetitions can resemble the incessant pattering ofOskar Matzerath in their tirelessness. By the end of The Box, one never wants to hear about this magical camera again,so overbearing does the image of Marie in her darkroom become. In fact, the mostrevealing moments in The Box arethose that step outside the entrapment of metaphor into simple, unadornedmemory, uncorroborated by the snap of an ever-present shutter.

The Box reads,on its surface, as a gesture of penitence. Each chapter of dialogue between thechildren is framed by Grass himself, setting the scene and signaling the extentto which, even in giving them a voice, his children remain at the mercy of hiswriterly project. “Now the inadequate father hopes the children will feelsome compassion. For they cannot sweep aside his life, nor he theirs,pretending that none of it ever happened,” he writes. Yet as much as hetries to hold himself to account, what really interests Grass is Grass. Marieand her camera are meant to give us a window into his creative process, intohow he converts the ready world into traceable motifs. As one of the childrenobserves, “[H]e shows up in all his own books, sometimes as the maincharacters, sometimes in a minor role, in one costume or another, as if the bookwas always about him.”