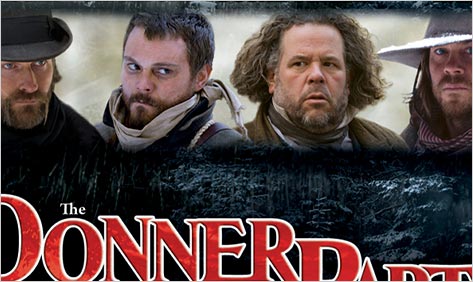 The cannibal film, much like its topical larder, may be the genre of last resort.  But open-minded cineastes wishing to move beyond Hannibal Lecter’s fey gravitas may be surprised to find an edgy contextual reframing that mainstream cinema lacks the guts to approach.  Long before The Blair Witch Project “reinvented” the horror genre by assembling “amateur footage” taken from apparent events, Ruggero Deodato’s notorious 1980 film, Cannibal Holocaust, set the verisimilitudinous standard, daring to juxtapose real animal slaughter (a large sea turtle and a beheaded squirrel monkey are just some of the on-camera victims) against staged human barbarism.  Much of this was photographed in a vérité style taken from film reels “recovered” by a team of muskrat-eating mercenaries.  The exploitation filmmaker characters inside this exploitation film narrative commit savage acts: torching a tribal hut and shooting and raping the natives.  And the psychological dissonance, which causes the viewer to ponder who the true “savages” are, proved so potent that Italian authorities arrested Deodato, believing that the actors were murdered during production.  (To accentuate the confusion between reality and film, Deodato had the actors sign a contract prohibited them from making media appearances up to one year after the film’s release.)

These unsettling but intriguing efforts to establish authenticity proved so inspirational that later cannibal films, such as Cannibals: Welcome to the Jungle and Wrong Turn 2: Dead End, incorporated similar techniques.  Cannibals focused on two couples disappearing into the New Guinea jungles to unravel and succumb to Michael Rockefeller’s fate.  Like Cannibal Holocaust, Cannibals follows the thread of the recovered spools and establishes a persuasive provenance.  The quartet holds up a nonexistent book called The Mystery of Michael Rockefeller before the camera (“Dude, you stole it?  The card is still in here.”), shortly before reading aloud passages about Rockefeller’s disappearance.  The more straightforward Wrong Turn 2  contains some surprising satirical jabs in its first half hour, using the same tactics to send up reality television (“You’re not on some summer resort making alliances.  You’re trying to be the last man standing after the apocalypse.”) and the fame-seeking actors who submit to such indignities for filthy lucre.

But when a cannibal film adamantly refuses to saddle itself with a vérité load, hungry directors are often forced to succumb to a flesh-eating narrative’s inherently ridiculous nature.  (Indeed, It’s not much of a surprise to find such wonderful black comedies as Eating Raoul and Delicatessen gleefully occupying the genre.)  In The Donner Party (recently released on DVD), Crispin Glover plays William Foster, the infamous figure who came up with the innovative idea of chopping up his fellow travelers to survive, and politely chews up the scenery.  Glover’s voice warbles between a vague Anglo-Saxon inflection and the adenoidal neurosis he most famously injected into Back to the Future‘s George McFly.  His preternatural pauses within dialogue (“In death…we may…serve the living,” “I am…a Christian,” “When…will…we…reach…the…provisions?”) would be incongruous in a conventional movie, but we are oddly blessed, thanks in part to the genre’s libertine possibilities.

One underrated cannibal film — 1999’s Ravenous – managed to serve up something altogether different while finding inspiration from the infamous 1846 chowdown and Sawney Bean, the 15th century Scottish cannibal.  Robert Carlyle plays Colqhoun, a man of Scottish descent who is the last survivor of an appetite-shifting attempt to find a shortcut through the mountains.  Colqhoun describes the heightened virility that comes from scarfing down human flesh, and his claims are confirmed when acts of cannibalism are seen to cure tuberculosis, increase agility, and even bring people back from the dead.  The film’s willingness to embrace such unreal symptoms, taken with its fine cast of quirky character actors, forces us to accept a minimalist alternative to the real.  The characters quote the most insubstantial of Benjamin Franklin’s maxims (“Waste not, want not”) and, near the end, can utter nothing more than the silly mantra “Eat or die,” while considering a grim, near-vampiric future supping on nothing more than human stew.   It’s an amusing conceit that echoes Deodato’s brutal thought experiment, while suggesting that Occam’s razor slices across any sad soul attempting to marry barbaric acts to thoughtful philosophy.

So while it’s doubtful that the cannibal film genre will be respected anytime soon, the collective willingness to transcend narrative conditions suggests that the genre is far from undercooked.