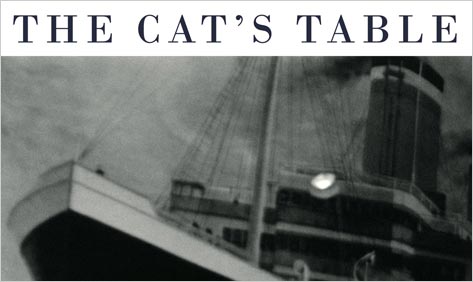 “Who realizes how contented feral children are?”

In Michael Ondaatje’s seventh novel, three boys run unsupervised through paradise, as attracted to evil as it is to them. Hannah Arendt’s insight notwithstanding, the evil they encounter turns out to be exotic, not banal. However, because The Cat’s Table recounts a 1954 voyage to London from the island formerly known as Ceylon, in an era when an English ship’s upper echelons wouldn’t have begun to acknowledge cruelties inflicted by racial and social class prejudice, it’s hard for the narrator to see that evil exists in any form but that of the institutional: wealthy white passengers and the ship’s officers who do their bidding. The title refers to Table 76, where eleven-year-old Michael is assigned to eat, along with two other boys, Cassius and Ramadhin; a washed-up jazz piano player; a botanist transporting poisonous and medicinal plants; a retired ship dismantler; a silent tailor; and Miss Lasqueti, pale, peculiar, in possession of a laugh “that hinted it had rolled around…in mud.”

The Cat’s Table is the inverse of the Captain’s Table, “the least privileged place.” Cassius, who is instinctively democratic — “I never saw him side with anyone in power” — embraces the invisibility lack of status endows. No one notices the boys unless they’re swimming in the First Class pool or have lashed themselves to the deck to witness a storm and require rescue. So they inhabit shadows and “see through the layers of authority.” Secrets unveil themselves. Michael’s cousin Emily trysts with a Sinhalese magician. A shackled prisoner exercises by moonlight: “He is said to have killed a judge.” Even Miss Lasqueti, skeptical about justice as it applies to Ceylon, warns Michael not to romanticize the prisoner: “He’s probably not the sweetest chocolate in the box.”

These details describe just the frame of the novel. The Cat’s Table tells two stories. One is Michael’s linear coming-of-age story, which reads, by itself, like a renovated version of “Billy Budd.” Embedded within this narrative are scenes that report, in collage fashion, what’s happened in London and Canada years after the end of the journey. Many novels contain both a framing story and embedded story, and they generally use separate genre conventions for each — for instance, the framing story might be subtly realistic and the embedded story mythic, fabulous. The structure of The Cat’s Table is unusual, though, in that that both the story about the childhood voyage as well as the story about the adults’ later lives in London and Canada are mostly realistic, until the very last pages, when both stories suddenly produce old-fashioned climaxes and revelations.

This sense of realism is more pronounced because Ondaatje’s methods blur the line between fiction and memoir. The novel’s narrator shares a name with the author, who was raised in Ceylon, and the adult Michael, like the author, lives in Canada and publishes books. Moreover, the prologue begins in the novelistic third person (“[H]e climbed aboard the first and only ship of his life…”) but abandons this for the more autobiographical first person (“I wonder who he was, this boy…this green grasshopper”) and finally narrates in first person from such a temporal distance that the novel reads like one of those memoirs written by a retired British peer (“It is only now, years later, having been prompted by my children to describe this voyage…”).

And most of the novel mimics life’s lack of plot, too. Character sketches seem to accrue in a merely serial way. In life, we travel expecting to meet fellow passengers and part unchanged, and yet we read novels expecting the protagonist to meet fellow passengers and find his future altered by them. The bulk of The Cat’s Table avoids this familiar arc. Pending its long-delayed finale, it records charming, ostensibly random scraps of eavesdropping: “I asked him, ‘How can it be an aphrodisiac and a laxative?’ And he said, ‘Well, it’s all in the timing.’ “

Like a classic modernist novel, then, most of The Cat’s Table works at resembling the disorderliness of experience, life’s accidents and caprices, shunning plot’s patterns and purpose. Slow and stately, it seems to sail to a stop, not to fruition. Then the final pages kick in, employing plot contrivances at breakneck speed: thematic accords and previously concealed character interidentities that rival those found in Dickens, and a (melo)dramatic cloak-and-dagger climax achieved by sleight of hand, as well as a potent concoction that induces hypnotized obedience followed by amnesia — effects as conveniently sequenced as those produced by an aphrodisiac that later works as a laxative.

Old-fashioned plot machinations not only produce a tidy, yet manic climax for the childhood story but for the contemporary story, too, where they strain credulity less elegantly. Ayurvedic medicine can’t justify the startling discoveries that take place in London and Canada, or the arrival of an especially implausible letter from a long-lost shipboard acquaintance, a letter so detailed it reads like an excerpt from a Victorian novel. In the final scenes, Michael and Emily hash out the what-must-have-happened like a detective and sidekick, or perhaps a therapist and patient exploring recovered memories.

Quibbles aside, The Cat’s Table is a wildly ambitious novel that bravely depicts not just the prosaic, institutionalized version of evil-colonial privilege-but also the moral blindness that sometimes came in its wake, lapses of judgment originating in sympathetic identification with fellow insignificants, the least privileged and most maligned. In fairy tales, captors are evil and victims are virtuous. In life, however, victims have often been schooled in terror, so they’re sometimes amoral, willing to sacrifice innocents. Or perhaps any cross-section of humanity includes its portion of sadists. Ondaatje give us a portrait of prejudice — and a portrait of fatally careless reactions to prejudice, too. He also gives us two sets of storytelling conventions: the most modern and least enchanted storytelling conventions, and the most ancient and magical. If the seam between these modes of storytelling is ragged, even glaringly conspicuous, the seam between a mid-twentieth-century childhood lived in the fragrant garden of Boralesgamuwa and an adult life lived afterward in England and Canada is glaringly conspicuous, as well, a seam closing over a gap between cultures so incompatible that a ship’s passage across it isn’t a journey leading toward adventure but diminishment. The adult Michael reflects: “Grandeur had not been added to my life…but taken away.”