The Chain of Chance 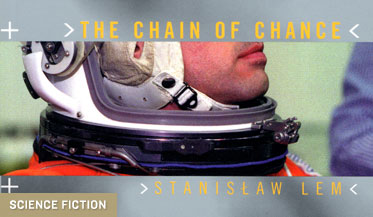 The New York Times once deemed the Polish writer Stanislaw Lem (1921-2006) “a polymath and a virtuoso storyteller and stylist?a genius.” Given to exploring fresh territory with every book, Polish-born SF master Lem is perhaps most famous for his novel Solaris (1961), filmed twice.

But Lem produced over two dozen other books, ranging from the fabulistic (The Cyberiad ) to the space-operatic (The Invincible ) to the metatextual (Imaginary Magnitude ). Although each volume boldly pioneered new dimensions, they all exhibited a common voice that blended sparkling intelligence, satirical irreverence, startling scientific speculations, and iconoclastic sociopolitical insights. Always a bit aloof from the herd of humanity, Lem was more philosopher than entertainer, possessing a Swiftian perspective on our foibles and charms, our record of failure and success.

Lem’s global audience was vast: with nearly 30 million of his books in print, he could at one time claim the distinction of being the most widely consumed non-English-language SF author in the world.

But Lem’s star in America was never as high as he deserved. His unconventional and sometimes dauntingly erudite work failed to appeal to the commonality of genre readers. And although during his lifetime he achieved publication in such prestigious mainstream outlets as The New Yorker, he and his stringently intellectual work failed to attract the benedictions of the arbiters of the canon.

Ironically, in 1989, just as his country was emerging from the yoke of Communism, Lem abandoned fiction, claiming incapacity.

“Now I am better and better aware of the fact that I do not know anything. I am not even able to familiarize myself with all the new scientific theories. There may be some geniuses out there — I am no longer capable of doing it. So what if my books were translated into forty languages and the total print-run reached 27 million copies? They will all vanish, since streams of new books are flooding everything, washing down what had been written earlier. Today a book in a bookstore does not even have the time to gather some dust.”

If we are to frustrate Lem’s mordant prediction, new readers must embrace his work, and a fine place to start is with one of his lesser-known books, The Chain of Chance (1975; and finely translated by Louis Iribarne).

A capsule description of Chance might evoke the paranoid-oneiric work of J. G. Ballard. Uneasy in a postmodern world that feels fragile and treacherous, a retired astronaut exhibiting a queer mix of apathy and hyper-excitability undertakes a dangerous investigation-cum-quest involving mortality and metaphysics. But the book is pure Lem.

The Chain of Chance appears to be set in a year somewhat in advance of 1975, although a date is never made explicit. But we learn, for instance, that NASA has mounted a mission to Mars — a mission from which our narrator has washed out — and that a surveillance society, growing up in response to terrorist actions, has installed elaborate public defense mechanisms.

Through this vaguely disconcerting milieu moves our protagonist, John or Jean, no surname. He’s 50 years old, retired from NASA, and now working as a kind of private eye. With his various handlers, including one named Randy, John is conducting a simulation run in order to discover what killed a number of men who seem to have little discernible connection — or rather, who share too many quirky, senseless affinities. Duplicating the actions and habits of one of the victims, John travels throughout Italy. But his emulation of the victim encounters a jarring disruption in the form of an airport terrorist attack that shatters his impersonation, and forces him to take a hero’s role as he rescues a young girl from the chaos.

Recovering from this setback, John next visits under his own identity a French computer expert named Dr. Barth. Barth has created a supercomputer which might possibly correlate in a meaningful manner all the odd facts connected with John’s quest. Barth and John hold long discussions about the case, and various other experts contribute their analyses as well. But suddenly, John — who all along has had governmental backing from powerful patrons interested in the solving the “murders” — gets a message from the S?ret?, the French police. They reveal to John that his case seems to touch upon a line of secret military research. He’s advised to drop his investigations.

Reluctantly, he does as ordered. But just on the point of returning to America, he accidentally gets all the answers he has sought — in a manner that imperils his own life.

This synopsis makes Lem’s book sound perhaps like a straightforward detective novel. And indeed, there are touches of Chandler and Simenon here, deftly applied, making this novel part of the small canon of hybrid SF-mystery tales. John’s sometimes stony lack of affect and occasional tough-guy observations carry a noir-ish impact. Elements of spy fiction are layered in as well, especially in the opening section before we fully understand John’s program, which reads like something conducted by the Mission: Impossible team.

On another level, the book’s anatomizing of a postmodern landscape rife with terrorists, governmental spooks and McLuhanesque media organizations was prescient, and rings even truer today.

But the book’s essential nature is philosophical. It’s a meditation on the role of logic, the phenomenological nature of the universe, the meaning of causality, the limits of knowledge, and even the futility of existence.

This all becomes explicit in the discussions between John and Barth and some fellow professors midway through the book. The inherent failures of induction, the overwhelming complexity of modern human society and the natural universe, the ability of large-scale random events to mimic intentionality — all the traps that await the limited human mind and its insistence on pattern-seeking are itemized and laid bare. Bravely, Lem provides no real solution for these congenital defects of the human brain. His final portrait of the human condition is almost Lovecraftian, as in the famous opening line to “The Call of Cthulhu,” which cites the slim mercy inherent in our inability to comprehend what’s behind the cosmic scrim.

The tour-de-force, psychedelic climax to Chain, in which John gets his answers, almost at the cost of his life, only due to a bizarre concatenation of chance events, hammers home this lesson.

And here, 15 years before Lem’s weary abdication, we see the incipient burr beneath Lem’s own saddle.

Surely in writing such a tale, Lem was inspired by “Death and the Compass,” the famous story by Jorge Luis Borges in which a detective’s meticulous ratiocination is his undoing. But if Lem owes a debt to this famous predecessor, so do those who came afterwards owe a debt to Lem. It’s hard to imagine such contemporary authors as Paul Auster, Steve Erickson, and Haruki Murakami creating their art without Lem to point the way.

The average person’s life may indeed be a chain of chance. But Lem’s literary legacy must not be left to an aleatory universe.

NOTE: many of the quotes and facts about Lem in this piece are to be found at his official web site:
http://www.lem.pl/cyberiadinfo/english/main.htm

Previous Previous Post: Musicophila: Tales of Music and the Brain
Next Post: A Summer of War and Peace Next