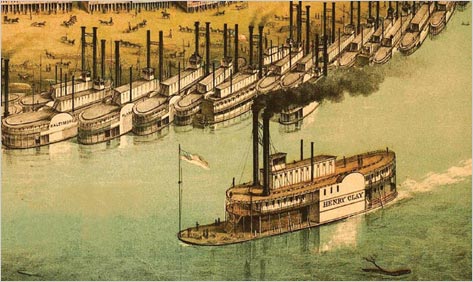 In the late 18th century, Frenchman Jacques Clamorgan began buying up vast tracts of land in and around St. Louis. He acquired most of the titles when the region was in Spanish hands, and he expected to amass a fortune by selling the land to waves of incoming settlers after the area shifted to American control as part of the Louisiana Purchase. But the U.S. government wouldn’t confirm Clamorgan’s titles—declaring the land public domain instead—and the futile fight to cash in was taken up by successive generations of his heirs, whom historian Julie Winch describes as “tenacious” and “litigious to a fault.”

In The Clamorgans: One Family’s History of Race in America, Winch tracks the family’s obsessive efforts, which are made all the more intriguing by the fact that Jacques’s heirs were black: he lived openly with a number of black women, all of whom had at one time been his slaves. Three of his four children died young, with only a daughter, Apoline, living long enough to have children of her own. Apoline was the mistress to a succession of white men, bearing seven children along the way. Through the years, as Apoline, her children, and then their children pursued the Clamorgan land claims, the response they received—as they battled everywhere from the Missouri state house to the U.S. Congress and the Supreme Court (even taking on Daniel Webster, who headed a rival consortium attempting to claim title to the same land)—reveals much about changing perspectives on race and, given that neither Jacques nor Apoline ever married, legitimacy.

As interesting as the political and legal battles is the information Winch is able to unearth about the family members’ daily lives “in the racial borderlands.” Two of Apoline’s children founded and ran Clamorgans, a celebrated barbershop and bathhouse that served St. Louis’s white elite (blacks were barred) and thrived for decades. Ulysses S. Grant was a regular, and other customers included Senator Stephen Douglas and Edward, Prince of Wales, heir to the British throne. Clamorgans was known as a “colored” shop, with a newspaper describing its “octoroon” proprietors, but a third son of Apoline’s, Cyprian, lived as a white man during stints outside of St. Louis (although in 1858 he published The Colored Aristocracy of St. Louis, a biting satire about the city’s free community of color).

The magnitude of the so-called one-drop rule is demonstrated by a scandal that erupted a generation later. Jacques’s great-grandson, Louis P. Clamorgan, was living in an exclusive white suburb of St. Louis even though he was known as “colored” at his job downtown. In 1911, after one of Louis’s daughters married the son of neighbors who were also passing for white, she gave birth to a dark-skinned child. The episode was covered in newspapers nationwide, destroying the marriage of another of Louis’s daughters into a prominent white family. “Negro Blood, Shown by Birth, Shatters Two County Homes,” one headline screamed. “I have dreaded this for thirty years. Now that it has come, we will have to bear it,” Louis’s wife told a reporter. In true American style, however, that branch of the Clamorgans ended up moving west and reinventing themselves yet again, changing their surname to Morgan and being recorded in the census as white.

In energetic yet elegant prose, Winch details every clue she finds on the often elusive family members. She clearly has a grand time playing detective, saying of the Clamorgans, “I have considered it a privilege to spend time in their company.” Her enthusiasm can be infectious, but it’s not always enough to make one forget about the Clamorgans’ less appealing characteristics. Jacques, besides acting unethically in business matters, treated his mistresses cruelly. His descendants, Winch admits, were “in most instances duplicitous and double-dealing.” When the author adds that “it was because they had to be,” she seems to confuse their canny negotiations of their vexed racial status with their frequent willingness to throw friends or associates under the trolley if it might get them closer to their payday. What’s more, Winch casually mentions a couple of settlement offers the government proposed in exchange for the family dropping their claims. One, in the late 19th century, was for $375,000, “by today’s reckoning well over $8 million”; the family, displaying greed and righteous belief of Winklevossian proportions, rejected the deal outright. While it’s easy to be fascinated by the Clamorgans, it’s harder to feel sympathy for them.