The Clinton Tapes: Wrestling History with the President 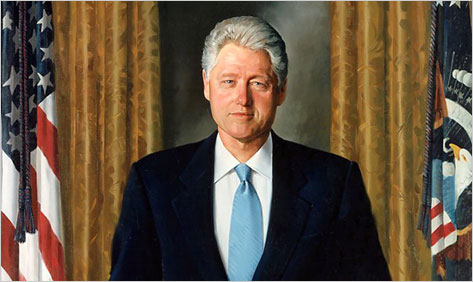 A cross between Woody Allen’s Zelig and Tom Hanks’s Forrest Gump, MacArthur “Genius Grant” recipient and Pulitzer Prize-winning biographer Taylor Branch pops up everywhere in Bill Clinton’s presidency. An old friend from the 1970s (he, Bill, and Hill shared an apartment when they all worked on George McGovern’s presidential campaign in Texas), Branch is pressed into service as a chronicler of events to aid the president with his eventual memoir writing. Branch helps out at the inaugural, offering phrases and rewriting sentences for The Speech, even though he doesn’t even have a seat at the actual event (he’s reduced to squatting in the aisle). Then he, Hillary, and Bill all walk into the White House together. When Clinton realizes that Branch knows Aristide, the deposed leader of Haiti, he uses Branch as a go-between to get a pledge that if Aristide is restored to power, he’ll not try to extend his term of office (later Branch tags along when U.S. forces do restore the Haitian president). Clinton also sounds Branch out on Cabinet appointments and on policy, and uses him as a go-between during a baseball strike.

Branch’s main function, since he holds no office and is working on his own biographical study of Martin Luther King, is to tape Clinton discussing recent events of his presidency. Branch does so 79 times over the course of two terms, whenever the president wishes and his schedule is free, which sometimes involves late-night meetings at which Clinton is exhausted (even on occasion falling asleep in mid-paragraph), bitter at the media, or distracted. Often they talk on tape until Clinton winds down, ends the session, and goes to sleep.

This book is not a transcript of these tapes. After leaving Clinton, Branch would drive back to his home in Baltimore, taping his own recollections on the way back and then sitting in his truck until he finished. (Clinton kept the original tapes.) The result of Branch’s own recordings is a great sprawl of a book. In each chapter, Clinton darts from the personal to the political, from mundane aspects of White House life to great decisions facing him. One gets to understand the blur of events, all happening simultaneously, all buffeting the president and White House staff. We experience in these sessions Clinton’s frustrations at the uncompromising partisan opposition from Republicans (on the economic program and health care), the waffling support from Democrats (especially the Democratic Leadership Council of centrists that Clinton had helped to create), and the nitpicking and sensationalism of the media, more interested in scandal than in policy. It wears the man down. Clinton frequently suffers from minor illnesses: he appears with colds and allergies and conjunctivitis, and he’s often out of shape, gaining unwanted weight as he slip-slides awkwardly into late middle age. It also wears Branch out, for he has several roles that might be complementary but also might present conflicts of interest: he is a friend but has obligations to historians and biographers; he wants to present a record of Clinton’s thinking, but doesn’t quite know how to ask the tough questions, or even if he should. We not only get Clinton ruminating on his presidency, we also get Branch ruminating on his own delicate position: when the president is in the midst of a discussion about a major issue, but then digresses to talk about his golf game (usually about a great shot he made), should Branch interrupt to get him back on track? “A President deserves both candid support and an objective diary” Branch concludes, “but it was hard for me to nurture them both.”

What is the worth of all this? It lies in its format, which doesn’t compartmentalize events into discrete policies and presidential decisions, and doesn’t present a tidy chronological narrative of how health care failed, for instance, or how the crime bill and NAFTA passed, or an assessment of Clintonomics. Instead, it shows Clinton at work, which means Clinton thinking hard about history, about what has recently occurred, about what will happen next, and even about what it will all mean for future generations: “Clinton tried out his evolving theory that the central challenge of the next fifty years would be to handle the colliding forces of integration and disintegration.” Through Branch’s recollections, we get to understand Clinton’s intuitive sense of politics as a series of moves in a game: to win (or even break even), you must figure out how your own move will be received, and what moves your opponents may make in response. He must decide how to handle Syria’s Assad, worried about being left out in the cold if other nations in the region settle with Israel. He must find a way to support Yeltsin without acquiescing to unreasonable demands. He has to figure out a way to open up a real dialogue with China’s leadership. And he has to figure out all these things (and much more) simultaneously and not sequentially. It is to Clinton’s great credit as a politician (and Branch’s as a narrator) that we see the point in all this maneuvering: always there is some goal that goes beyond Clinton’s personal political stakes. For those in the country who have believed that the Clintons did not care about anything other than the Clintons, this book will serve as a welcome corrective.

All these deep matters are leavened with anecdotes. We all know that Boris Yeltsin was a drunk, but how many of us knew that on a state visit, he left Blair House and wandered onto Pennsylvania Avenue late at night in his underwear, looking for a place to get a pizza? (As Clinton recounts, eventually he was collared by the Secret Service and returned to Blair House, where he got his pizza.) There are the vignettes of life in the White House; the Clintons are, after all, a family, and Chelsea makes her appearances, sometimes hoping to find time with her dad, at other times too busy and too stressed to make the time for him he seeks. Branch provides many examples of Clinton’s concern for others: there are touching moments when Clinton spends time with Branch’s young son Franklin, an athletic boy sidelined for a while with a hip problem that eventually responds to treatment.

As the book unfolds, inquiries into Clinton’s affairs (business and otherwise) cause him to acquiesce in the appointment of a independent counsel, and that in turn means that the tape recording project itself might need to be scrubbed, because the tapes at any time could be subpoenaed. Nevertheless the two men press on with their project. The efforts to pass a health care bill (which fails), and the passage of minimal gun control legislation mobilize conservative groups and their media allies, leading to a stunning upset in the midterm elections. It takes all of Clinton’s political skills to hold on and win reelection. Ultimately there is the impeachment debacle of the second term, in which neither Clinton nor his Republican tormenters acquit themselves credibly or creditably. Through all of this, Branch provides an account that will help historians and political scientists analyze events more accurately.

Branch has provided us with a window into Clinton’s world, or should one say his worldview. It is not a definitive history of the presidency, nor a primary document (based as it is on Branch’s recollections of the primary source). But it is an indispensable guide to understanding the man in the office. Since Clinton’s presidency, he has organized the Clinton Global Initiative: each year it raises billions of dollars to develop programs to deal with world poverty and hunger and disease, promote the education of girls and women in developing nations, and foster the transition to a low-carbon energy infrastructure. Anyone who reads Branch’s extraordinary account of Clinton’s time in the White House will not be at all surprised at this imperfect ex-president’s continued efforts to create a more perfect world.

Richard Pious is Adolph and Effie Ochs Professor at Barnard College and the Graduate School of Arts and Sciences, Columbia University. He is the author of The President, Congress and the Constitution (1984), The War on Terrorism and the Rule of Law (2006), and Why Presidents Fail (2008).