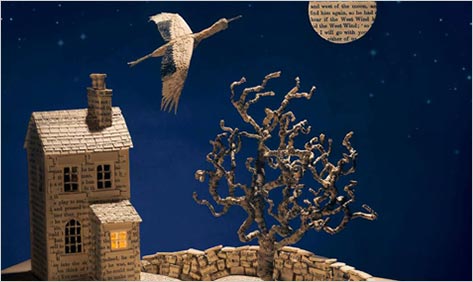 Although I have no hard statistics, I am compelled by overall impressions and experience to make a guess about a certain two-way literary street. I’m speaking of the crosstown traffic of authors moving from the neighborhood of adult novels to young adult novels, and vice versa. I suspect that authors who start their careers writing for an adult audience — and who eventually produce a young adult novel or two — are more common than authors who begin by writing for young adults and who then gravitate toward composing something for an adult audience.

In other words, for every J. K. Rowling, who famously made her name in YA and then essayed two books for more mature readers, there will probably be three or five or ten writers like Dave Barry or Scott Westerfeld or Candace Bushnell or John Grisham or Harlan Coben, et al., who hone their chops first in the adult marketplace and then, for one motive or another, produce one or more YA titles. But whatever the direction they move in, writers who venture from one marketplace to the other are like sailors who leave behind a familiar ocean for a new one: though the principles of navigation remain constant, changes in weather and currents call for a confident and creative hand at the wheel.

One voyager unafraid of straying from his familiar purlieus is Patrick Ness. While his early and under-acknowledged first novel, The Crash of Hennington, was intended for adults, as was his recent short-story collection, Topics About Which I Know Nothing, his star became fixed in the YA firmament with his ambitious Chaos Walking trilogy. But his newest, The Crane Wife, is pitched for the mature reader, and it effortlessly leaps all divides.

The first chapter begins with the immediacy and intensity of the story’s fairy-tale origins. Asleep in his lonely, divorced, middle-aged man’s bed, George Duncan is awakened by a “keening” from his backyard. He ventures out into the moonlit ice and snow, finds a wounded bird, a crane, pierced by an arrow, helps to free it, and then watches it fly away, all while experiencing  a turbulent roil of thoughts and emotions conveyed in bravura fashion.

The next section is a tour-de-force of dialogue-only text, in which George and his lone print-shop employee, Mehmet, argue with a customer, culminating in the arrival of a stranger, a woman named Kumiko. We jump next to George’s highly entertaining potted biography, a back-story that reveals him to have always been a somewhat nebbishy, hapless fellow whose sensitivity to life’s troubles and epiphanies charts high on the scale of such conditions. Next up is a chapter on Amanda, George’s, adult daughter, whose life somewhat mirrors her father’s in its prickly awkwardness. (And might Amanda’s amusingly snarky riff on two classic YA realms, Oz and Narnia, reflect Ness’s own ambivalence toward the genre?)

This artful, jumpy narration, to my sensibilities at least, harks back more to the YA approach of keeping a boredom-intolerant teenage reader heavily invested in a cascade of swift events. It’s definitely not the chin-pulling, deliberately protracted, lugubrious pace of much adult literary fiction. And yet Ness’s themes, attitudes, and topics are markedly “adult.” Loneliness, regret, betrayal, disappointment, an inability to make one’s exterior life and circumstances match one’s hidden interior portrait, a sense of false steps and no turning back — until a miracle occurs and is met receptively.

The rest of the book charts the odd, irresistible, and unique love affair that blossoms between George and Kumiko, centered around the art they create together. (And by expanding the creative role — in the original fable, the exclusive province of the crane wife — to include her complementary mate also, Ness cleverly shifts the dynamics of guilt and responsibility, of giving and taking, into new and more interesting dimensions.) We also get Amanda’s psychological journey, as well as a raft of wry and bittersweet musings on the art world, office life, parenthood, marriage, and a dozen other threads of twenty-first-century existence. This is a book where the eternal soulstreams run in subterranean but perceptible fashion beneath the mesmerizingly alluring quotidian landscape. Also to be admired are Ness’s depictions of the subsidiary characters, such as Mehmet, George’s irreverent yet not-insensitive assistant, and most vitally Rachel, Amanda’s co-worker and a pivotal figure in George’s life as well. She plays a particularly crucial part in the exciting, multivalent — if not multiversal — and fantastical ending.

Although bits of Ness’s book remind me at times of Haruki Murakami’s subtle enigmas and even of a less-sappy Paulo Coelho (especially when Kumiko is making her cryptically wise and oblique pronouncements), what it really puts me in mind of is the work of an utterly forgotten writer, Robert Nathan. Remembered today, if at all, because Hollywood filmed his Portrait of Jennie, Nathan exhibited a melancholy, steel-spined whimsy that portrayed a world where miracles of love offered themselves to anyone whose heart was open enough, but where cosmic forces also raised barriers and obstacles, and often exacted payments and tributes almost impossible to sustain. In other words, both Nathan and Ness subscribe to the quintessential fairy-tale Umwelt, both ancient and still active.

Ness’s novel is prefaced with a quote from the pop band the Decemberists — an avowed inspiration, he tells us in his afterword (and all the more appropriate given that their lead singer, Colin Meloy, published his own work of YA fantasy, Wildwood, in 2011). The band offered a song based on the fable of the crane wife on their 2006 album of the same title. Like the subtle, authentic, retro-yet-au courant music of this group, Ness’s novel engenders deep feelings in the reader without betraying intellectual solidity or wise, even caustic judgments. (As Amanda notes by the book’s end, you have to love someone, but not everyone, because that would make you an idiot.) Perhaps George’s naïve, powerful love for Kumiko, paired with her worldly wisdom, is a parable for yoking the best of YA and adult fiction. A fitting testament to the novel’s effect could be three more lines from that same song: “There’s a bend in the wind and it rakes at my heart / There is blood in the thread and it rakes at my heart / It rakes at my heart.”