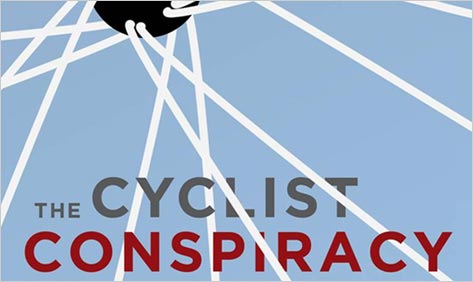 Suppose you chanced upon someone in the street or on an elevator who saw you toting around The Cyclist Conspiracy and this curious individual asked what it’s about. Here are a few talking points to consider:

A.) Spanning the centuries, it concerns an esoteric religious order with a passion for God and bicycles.

B.) It’s a stylistically fractured, experimental novel that is prone to switching genres with each chapter.

C.) The Cyclist Conspiracy sounds a lot like the sort of thing a less preternaturally talented Borges might have produced.

E.) One of those books that name-drops folks like Henri Lefebvre, Georges Bataille, Meister Eckhart, Hans-Georg Gadamer, and Lewis Mumford; and features a letter that begins:

…In any case, alcohol brought me to faith in God. Tearing me further and further down, humiliating me, it cleared a place for me in the Lord’s Kingdom…

…The doors of the kingdom are exceptionally low. A man must humble himself, he must lower his head if he intends to enter.

Svetislav Basara’s novel is a determined exercise in intellectual capriciousness that is easier to admire for its formal qualities than for its ability to engender an emotional connection. From the get-go, the narrative picks up the “meta” prefix and clings to it dearly, as evidenced by the book’s preface, which relates how the “editor,” S.B., happened upon the novel’s opening sections — “A Tale of My Kingdom” and “The Manuscript of Captain Queensdale” — in the Municipal Library in Bajina Bašta, a town situated along the western flank of Serbia. It would prove trying to think of a finer line to tie such a set of self-conscious literary gestures together than the narrator’s parenthetic avowal that he’d come to the library to seek “refuge from a sadness the cause of which I still cannot mention.”

Nixing any notion of temporal propriety, the protagonist of “A Tale of My Kingdom,” Charles the Hideous, skitters between past, present, and future in his jaunty account of his ascension from a dishwasher in a tavern to a monarch with clairvoyant powers. This jocular misogynist — who one might think of as the inbred culmination of generations of unreliable narrators — boasts that he’d avoided the Oedipal complex because, in his youth, he didn’t know what that was. Later in his rambling, Charles notes that Martin Luther is currently four years old (which would make it 1487 or 1488).

As if you hadn’t already guessed, Charles has transcended facticity, implicitly becoming one with the godhead — whose perspective, quite naturally, is that of eternity:

I extracted myself from my shell-of-fact, thank God, and I watch what is going on at the grandiose fairground that stretches across the centuries in both directions. I suppose now it is understandable how it is that I know what happens in the distant past and far into the future: I am not a fact, I simply believe that I exist; that gives me the ability to recognize facts that are all happening at the same time, but for the sake of difficulty, they enter the present one by one.

In his enlightenment, His Excellency sees fit to make his kingdom a haven for heretics. One of whom is Joseph Ferrarius, a member of the Order of the Little Brothers — a mystical sect that rejects the idea that the Church is the sole gatekeeper to salvation and subsequently runs afoul of the Parisian Inquisition. Known for the symbolically laden two-wheel contraptions on which they gallivant about (initiates see versions of infinity in the wheels, a cross — when observed from above — whose horizontal ends are the handlebars, etc.), the Little Brothers are the forerunners to Luther, preaching salvation by faith alone. But, with the added twist that they long for the return of the Byzantine Empire (which dissolved thirty years before Luther’s birth), in whose Eastern form they find an alternative to the rationalist mind-set of the West.

Embracing the old avant-gardist love of textuality, Basara packs the first half of his novel with claims and counterclaims about the subsequent history of the Little Brothers who are later rechristened the Order of the Little Brothers of the Evangelical Bicyclists of the Rose Cross. On the skeptic’s side, there is an essay that debunks their existence, a record of Sigmund Freud’s attempt to free a young man of the idea that such a secret society exists, and a critical analysis of the ideological assumptions behind the group’s assertions. Heck, even Sherlock Holmes is drawn into the fray.

The second half of the novel is largely given over to the poetry and prose of Joseph Kowalsky (1901- ?), an erstwhile communist whose Damascus experience transforms him into a mouthpiece for the order. Not one for meekness, Kowalsky, in 1937, proclaims himself a count. Of the reasons he lists for his decision, his contention that as a member of the nobility he will be splendidly positioned to expose the skeletons of the privileged class, offers a good window into the book’s brainy vein of humor:

The aristocracy and filth go hand in hand; later I will explain why. The best example for that is one of my spiritual forebears — perhaps not the most notable, but certainly the most famous — the Marquis de Sade. Would some derelict, who is in despair because his roof is leaking, be able to write The 120 Days of Sodom? Would someone like Lenin ever author Philosophy in the Bedroom? But those are the most honest places in world literature; the most serious studies of the filth in the human soul. That is not depravity, that is brilliant scholarship.

There are few moments when the bookish sensibility lets up. One is not apt to mind this while enjoying the all-star cameos, but the theoretical sections, in keeping with a proper theoretical manner, are a slog no matter how in on the joke you are. Clearly, readers who dig emotional payoffs over exhibitions of cleverness should look elsewhere. Though truthfully, those of us who stick around may wish there were more of Basara’s occasional indulgence in dramatically white-hot passages. One such is an arresting tale of two zeks in the Gulag that appears, appropriately enough, in the middle of The Cyclist Conspiracy at what might be called the heart of the labyrinth.

Previous Previous Post: The Canon & the Cash
Next Post: 'Sunny Jim' or 'Herr Satan': Gordon Bowker on James Joyce Next