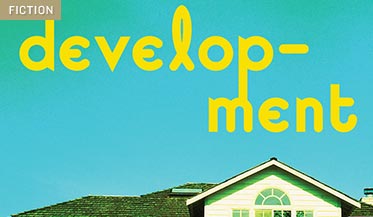 John Barth is one of America’s great literary pranksters: he has written a novel (Giles Goat-Boy, 1966) in which the universe turns out to be nothing more than a university, and another (The Sot-Weed Factor, 1960) entirely in 18th-century dialect. His best-known book is Lost in the Funhouse (1968), a collection of stories about, well, stories; they begin with their own conception and conclude while still trying to figure out how to stop. Many years have passed since then, and Barth’s bag of tricks remains full. His novel Coming Soon!!! (2001) took on the generation gap between text and hypertext; and now, in 2008, he has gone into the construction business, which may be the best trick of all, and the only one that could still have surprised his readers.

In The Development, a collection of nine enjambed stories, Barth builds up Heron Bay Estates, a gated community on the Eastern Shore of Maryland. The development is subdivided into marginally less and marginally more posh neighborhoods, with names like Oyster Cove, Blue Crab Bight, and Spartina Pointe, all connected by bike paths, nature trails, and roads where, you can be sure, no one goes over 20 miles an hour.

The suburbs have, or have had, their writers, whose work was for a few decades in the last century the patented product against which postmodernism defined itself. Heron Bay is, if anything, even blander, whiter, and more middle class than those literary tracts: compared to its (mostly) sober and (largely) self-satisfied residents, the pugnacious drinkers of Richard Yates’s Revolutionary Road look downright bohemian. As for Cheever’s bunch, Heron Bay Estates would have them all immediately institutionalized.

Things do happen in The Development: children die; men dream of sex and sometimes have it; an emeritus professor throws himself on a borrowed machete. Mostly, however, what Barth’s narrators do is ramble, from house to house, calamity to calamity, thought to thought. Here’s one of the residents of Heron Bay, setting the scene for a story that will turn out to have exactly nothing to do with the Mattahannock River:

A mile wide where it ebbs and flows past our Heron Bay Estates, the Mattahannock (like the opening sentences of this would-be story) then winds on and on: another dozen-plus miles upstream, ever narrower and shallower, northeastward through the agribusiness corn and soybean fields and industrial-scale chicken farms of our table-flat Delmarva Peninsula to its petering out (or in) at its marshy headwaters somewhere near the Delaware state line?

The sentence goes on for another half page, but you get the idea. Barth happens to live in eastern Maryland, but I like to think that even if he were from Arkansas, he would have equipped the narrator with this prideful our (our Estates, our Peninsula), which closes off the possibility of even limited omniscience. Whatever happens, we’ll see it from ground level.

Readers familiar with Barth’s work may already have singled out another (parenthetical) phrase from the quotation above, and they may already be preparing to ask a question about it. Like the opening sentences of this would-be story: is Barth, in the midst of all this earthy detail, playing his old metafictional games? Indeed yes. Six of The Development‘s nine stories stop on the brink of — or just past — precipices of writerly self-awareness: “The Bard Award,” an ambiguous collaboration between an old writing teacher and his fired-up young protegée, bites its own tail gleefully; “Us/Them,” putatively a column in a local newspaper, breaks off in despair. The other four, like their narrators, hesitate between those emotional extremes, as if waiting to see what comes next.

The open-endedness of these stories is not mere trickiness. The tired reporters and washed-up teachers of creative writing in Heron Bay Estates are, like Barth himself, close enough to the end of their lives that the autobiographer’s paradox is more than a theoretical worry. How do you tell the conclusion of your own story? How can you even imagine it? For someone with a bit of literary flair — and all of Barth’s narrators, however mediocre their self-described talents, have that — there is perhaps no better way to face the certainty that your own consciousness will cease, than with a defiant colon, so:

Is this metafiction or suburban realism? The wonderful and sad thing about The Development is that it doesn’t matter. Everyone in Heron Bay Estates is lost to a greater or lesser degree in the funhouse of early twenty-first-century America, perplexed by a shimmering economy, an uncertain climate and an unfathomable war. A few of them don’t know they are lost: they are the awful ones. A few more choose to leave precipitously, and they’re not much better. Between these extremes, Barth populates Heron Bay with a number of characters who have reservations about nearly everything but are willing to give life the benefit of the doubt, or maybe it’s just the benefit of doubt. In “Progressive Dinner,” Pete and Debbie Simpson, who have lost their daughter in a car accident, debate the authenticity of an email from a Nigerian girl who wants money for school. One of the liberal guests proposes that they help the girl,

“And then Pete and I officially adopt her as our daughter,” Debbie says at last, in a tone that her husband can’t assess at all, “and we stop eating our hearts out about losing Julie, and everyone lives happily ever after.”

It would be a fairy-tale ending to the story, if it was real, but is it real? The stories we tell and the stories we hear are always opening out onto questions like this; and maybe we’ve moved past the point where we have to stick the label “postmodern” on those writers who allow their doubts to interrupt the flow of their telling. Which is actually not how Barth plays it, in this case. The progressive dinner winds down with some drunk people shouting:

From the porch Chuck Becker adds loudly, “God bless us all! And God bless America!”
Several voices murmur “Amen.” Looking up and away with a sigh of mild annoyance, Peter Simpson happens at just that moment to see a meteor streak left to right across the moonless, brightly constellated eastern sky.
So what? he asks himself.
So nothing.