The Devil and Mr. Casement 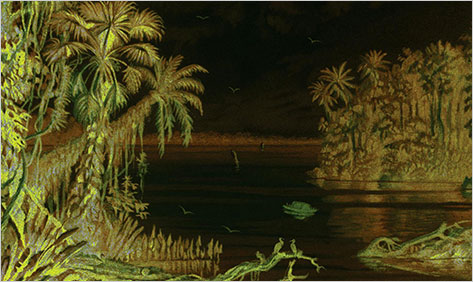 It is a comforting custom to believe all grand-scale human atrocities are in the past. The Nazi-perpetrated Holocaust could never happen now; the tortured deaths of three million Congolese under Belgian rule occurred in some quaint nether-time. Likewise, the story at the center of The Devil and Mr. Casement, the historian Jordan Goodman’s detailed account of how the chief whistle-blower of the Congo crimes shortly thereafter uncovered similar butchery in Peru’s Amazon, is hardly imaginable in our time. Hardly, indeed.

Goodman’s first need in telling his tale of “South America’s heart of darkness” is to set the larger scene for the dark horrors that ended in the enslavement and deaths of thirty thousand Indians in exchange for the production of 4,000 tons of rubber, and this he does by charting the blazing ascendance of the automobile in the first decade of the last century. In 1900, fewer than 5,000 cars were built in the U.S.; by 1910, some 458,500 motor vehicles of various types were registered here. All of them, as well as much of the multiplying machinery that was transforming society, had vast appetites for rubber. What more desirable way (from the robber barons’ point of view) to fill that need than to force a voiceless and practically invisible indigenous population to produce the commodity? A brilliant idea; with no need to pay a workforce, western-controlled interests such as the Peruvian Amazon Company could rake in pure profit. Of course, it dripped with blood. But with no oversight — these were “savages,” after all, their homeland so deep in a treacherous territory that the civilized whites (or even the natives’ own newly formed governments) preferred not to venture there — capitalist Don’t Ask, Don’t Tell policies could successfully perfume any stink with the glorious smell of wealth.

What they did not take into account was one man fired with determination to find the truth. One Roger Casement, “the most experienced and most universally lauded investigator of human rights abuses of his day,” who as the British Foreign Office’s consul in the Congo Free State had single-handedly torn the veil from King Leopold’s systematic brutalities in Africa, causing an international furor that led to the relinquishment of the monarch’s private holdings. Casement was the de facto captain of the nascent human-rights movement, and the South American Indians were in need of an army.

In 1908 the Peruvian Amazon Company was formed by Julio Cesar Arana, already the country’s largest rubber exporter. The new enterprise, however, expressed his desire to be a sort of emperor of commerce, and so it was registered in London — his first mistake — and incorporated with capital of one million pounds. Arana’s second mistake was to employ natives of Barbados, a British colony; now he was fully open to legal scrutiny by England. When by happenstance an American youth working in Peru brought to a newspaper tales of what he had seen in some jungle outposts of Arana’s company — unimaginable torture of natives who had been captured and forced to collect insupportable weights of rubber from wild trees; children brutalized; women raped; all starved and worked to death, flogged and put in stocks if they did not meet their quotas — the ultimate downfall of this devil was put into motion. Slow motion, for it took years of investigation and predictable resistance by bureaucrats, politicians, and businessmen; but with a man as driven as Casement was by the need to expose what he termed “brigandage” and “a system of armed extortion,” the end was assured.

The path to that end was cleared by the machete bearers of the press, the story first brought to light by news organs in South America, then by a publication enticingly entitled Truth (one wishes such naïve aspiration could fly in today’s world of the commercially entangled Fourth Estate).

Goodman tells the tale without embroidery — it needs none, because the facts are already beyond imagining — and largely without commentary. He allows it to simply unfold, revealing that which we would do well to remember: without courageous outsiders to keep ripping down the curtains, all manner of criminality can be hidden in plain sight by mercantile enterprises that are highly motivated to employ relentlessly clever tactics (in this instance, using pre-existing tribal rivalries to the company’s advantage by arming one hostile tribe and allowing them to do the subduing of their enemies; given the means of power, those bent on brutality toward others will become great students of method).

Around the midpoint of the book, the backstory is finally dispatched, all of it necessary to comprehend the complex international situations that could give encouragement to these horrific possibilities. From here, Casement’s investigation, and its subsequent presentation to the authorities in London, attains a propulsive narrative force. And that is when the reader finds that one amazing story has been enfolded by another: the incredibly sickening chronicle of a population’s enslavement and murder for the purposes of financial gain is wrapped around the personal story of a vaunted, moral crusader for human rights who bizarrely falls so far from grace that he himself is put to death by his own government.

That is because Roger Casement, a man who received the gratitude of Great Britain in the form of a knighthood, was an Irishman, and, being too well versed in the cost of “crimes against humanity,” a phrase he coined, he could hardly be insensitive to the sufferings of his own countrymen. Five years after he became Sir Roger, he was sentenced to be hanged. His crime was high treason (exacerbated by the crime of homosexuality), for running arms to the Ulster Volunteers. He himself needed a Roger Casement to come to his aid.

As did the people of the Amazon once more, when in 1963 Texaco arrived in the same area of the Putumayo that had already suffered so much, this time to take the land itself. “Although Texaco had moved on by the 1970s, the pollution remained,” Goodman writes in the epilogue, “ruining the rivers as sources of food and water. The Indians are still victims of pollution, deforestation, and the drug trade.”

As this necessary and plainspoken book shows, the happy consumers of the early twentieth century, motoring about to their picnics and parties, silk scarves flying, rolled on death. The implications are obvious for the early twenty-first century’s happy consumers of cheap t-shirts at Walmart, cheap meat at the grocery, cheap gas at the pump. We want what we want, so long as the suffering stays hidden. And, mirabile dictu, it usually does.