The Doors: A Lifetime of Listening to Five Mean Years 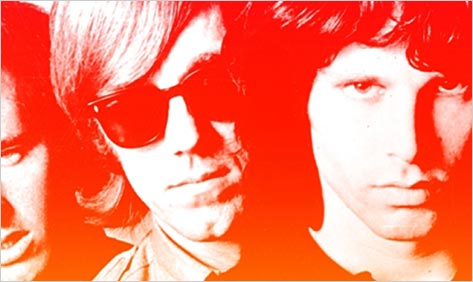 Jim Morrison was a rock star of limited singing range but nearly unlimited charisma. His self-destructive appeal – or, I should say, the appeal of his self-destruction — during his half decade as lead singer of the Doors has dominated the literature about the band until now.

The Doors exploded into view in 1967, with Morrison singing of the need to “break on through to the other side.” “Light My Fire” gave the group a number one single, and Morrison’s evocative lyrics and mesmerizing stage presence quickly made the Doors into the most popular rock group in the United States. But Morrison was never comfortable as a rock star, or as anything else. Always careless, he became reckless. Always erratic, he became wildly unpredictable. His descent, highlighted by an arrest for indecent exposure onstage in 1969, was a spectacle as kaleidoscopic as those organ runs of Ray Manzarek that gave the Doors their signature sound. Morrison aged a lifetime in five years in the public eye. On the Doors’ last album together, the superb L.A. Woman (1971), he sounds weary and used-up at the age of twenty-seven. His death was reported as the album ascended the charts.

But the Doors have enjoyed an astonishing afterlife. Forty years after Morrison sang his last, Doors music remains audible on the national soundtrack. The Doors have inspired numerous films (including a biopic by Oliver Stone and a documentary, When You’re Strange, that appeared last year), and books still pour forth about the band. Most of those books are crammed to bursting with pictures of Morrison. The camera loved the man, and beginning with the sinister portrait on the cover of the Doors’ eponymously titled debut album, Morrison’s androgynous beauty provided the main visual accompaniment to the group’s dark and disturbing soundscape.

Greil Marcus’s new book, The Doors: A Lifetime of Listening to Five Mean Years, benefits from a simple but radical innovation: he concerns himself with the Doors’ music, not Morrison’s grotesque courtship of death. This is not another story of the band. Instead, it’s organized according to the songs, both the words and the music. Marcus’s decision to treat them together is especially welcome because the Doors were defined by their sound, and Morrison’s striking lyrics were only a part of it. On its own, Morrison’s poetry was undisciplined and unmemorable. (Marcus calls it “unbearable.”) As guitarist Robby Krieger put it in an interview, “Jim goes out into unknown territory. We keep his exploration of the chaos intact, by keeping his words to the chords and the rhythms.” Thus domesticated by song structure, Morrison’s lyrics merged psychedelia with thanatopsis, shot through with the blues.

Greil Marcus is one of the most inventive and accomplished critics of American music in general, and rock in particular. His Mystery Train may be the best book ever written about popular music (and Marcus winks at that earlier book in his discussion of Morrison’s slovenly in-concert treatment of the classic song that gives Mystery Train its name). Marcus takes a daring approach in The Doors, bending his language to fit the subject. Specifically, he seeks within the rhythm and structure of his prose to capture the feeling of listening to the Doors then and now. His long, imagistic, deliberately indulgent sentences correspond to the same qualities in the Doors’ music. The Doors could be hauntingly lyrical and ridiculously overwrought — sometimes in the same song. (Think of “The End,” the epic nightmare from their first album: Francis Ford Coppola used the beginning of the song in the stunning opener to Apocalypse Now, but even as a teenager I found the Oedipal theater at the end of the song to be embarrassing.) Marcus is trying to capture the Doors’ excess within his own, to match the shape of his thinking about the group’s music with the impressionistic image making of the songs.

His appraisal of “The End of the Night,” for example, notes a guitar crescendo “that turns off the lights,” followed by “an answering three lines from Ray Manzarek that says he was waiting for this all along.” Marcus continues:

As so often with Manzarek’s playing, you can hear memories of late-night TV creep-show movie marathons, or even more directly the music from early network suspense programs, and those memories are immediately transcended. As soon as you think you recognize the allusions, the music takes you somewhere else, closer to Jody Reynolds’s “Endless Sleep,” say, but as always slower than that, more sure, more determined, fatalistic, at peace with nothing.

“Within seconds,” says Marcus, “the song is underwater,” with Morrison swimming through it, “feeling the inner tides between his fingers.” The title of the song, repeated by Morrison, becomes “a skull he can hold up to the light.” This is tightrope-walking criticism — of a tightrope-walking band.

Jim Morrison, Marcus states flatly, was a “degenerate drunk.” But the Doors, not Morrison, are his subject, and their music speaks a special “language of dread.” Marcus aims to untangle the power and beauty of that language from the noise of Jim Morrison’s sordid burnout and replace it within the scenes of the sixties and the scattered precipitate of the sixties that stands for that era today. The Doors is a reflection on the Doors’ music in time and over time — and it is a book about the band like no other.