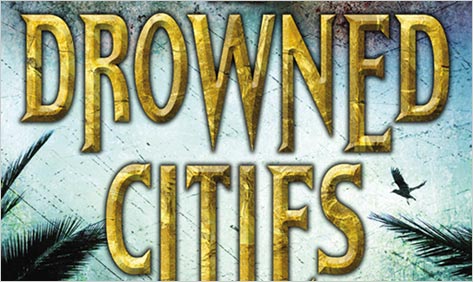 In his award-winning YA novel Ship Breaker (2010), Paolo Bacigalupi imagined a post-oil world a century from now, drastically changed by the effects of global warming — a kind of upbeat dystopia in which human civilization survives despite massive upheaval and war. In his new novel, he returns to the same milieu, though the story he follows here is more deeply shadowed. The Drowned Cities introduces the one-handed, half-Chinese “war maggot” Mahlia, who lives in Banyan Town along with Mouse, who once saved her life, and the humane Doctor Mahfouz, for whom she works. Together, they eke out a living amid the chaos of a fragmented former United States awash in battling militias and armies.

This fragile existence is compromised when Mahlia and Mouse encounter the man-beast named Tool, “a perfect creature, designed from the blood on up to hunt and war and kill.” The massive Tool is fleeing Colonel Glenn Stern’s United Patriot Front, which soon occupies Banyan Town looking for the living weapon. Gravely injured, Tool needs medicine and strikes an uneasy bargain with Mahlia; when Mouse is later conscripted by the UPF — who operate with a savagery barely reined in by the vestiges of military discipline — Mahlia enlists the monster’s aid to help her rescue Mouse. Their quest takes them into the drowned cities, an area around the former metropolis of Washington, D.C., where the chaos is even more horrific.

The second half of The Drowned Cities chronicles Mouse’s life among the soldiers of the UPF and Mahlia and Tool’s travel downriver in pursuit, with the ultimate goal of seeking safety in Manhattan Orleans or Seascape Boston. Of course, things don’t work out quite the way either of them envision, due to obstacles like the UPF’s nemesis, the Army of God. One of the most vivid scenes in The Drowned Cities depicts a battle between God Soldiers armed with powerful artillery and a unit of the UPF trying to cross the river. The clarity and tension of the sequence is utterly convincing, influenced more by classic combat literature than the extrapolated conflicts found in most science fiction.

Throughout the novel, Bacigalupi handles several elements with aplomb. Mahlia is a fully realized, compelling character, and the sheer physicality conveyed by Tool as super-beast often astonishes. The casual brutality of amateur soldiers is blood-curdling rather than cartoonish. The well-thought-out future setting fascinates, especially in showing the aftereffects of a failed Chinese peacekeeping mission.

However, the novel teeters perilously close to becoming “Apocalypse Now Lite” simply by compressing events into too tight a timeframe. Mouse’s conversion to brainwashed teen soldier and Mahlia’s trip downriver with Tool both seem curiously foreshortened, especially given the lengthy prior scenes (sometimes tedious) of Mahlia convincing Tool to help her. The inevitable final confrontation in a half-ruined palace bears an uncomfortable resemblance to the climax of a Hollywood blockbuster.

Still, even if it at times falls short of its ambitions, The Drowned Cities demonstrates a fearlessness on the part of the author. Every chapter from Tool’s point of view mesmerizes, crackling with a raw energy and verve, and the reader comes to care deeply for both Tool and Mahlia. And unlike many page-turners, the book’s violent action is paid for with a deep sense of the tragic, a vision of a possible future that leaves behind the marks of its impact.