The Earrings of Madame de… 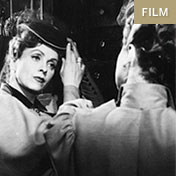 It was not without misgivings that the German-born, Jewish director Max Ophüls (1902-57) began work on the penultimate film of his career, The Earrings of Madame de… Adapted from a novel by Louise de Vilmorin (published in 1951, two years before the film’s release), the Belle Époque story follows the extramarital goings on of an upper-class Parisian couple. Ophüls wondered if his project — with its focus on the thwarted love affair between a pampered countess and an Italian diplomat — was anemic in its conceit compared to other literary works he might have transcribed for the screen. In any event, it was the structure of de Vilmorin’s novel that impressed him rather than its contents. In the film, Madame de… (played by Danielle Darrieux) sells a pair of diamond earrings, a gift from her husband (Charles Boyer), to cover a 20,000-franc debt she incurred on the sly. Through a series of coincidences, the earrings find their way back to the couple and in the process become laden with an outsized symbolic power. Ophüls’s ability to use a modicum of dialogue to express expansive feelings and his unfailing sense of mise-en-scène — identified by a camera style that seems almost aquatic in its fluidity — lift what might otherwise be a foamy indulgence to the rich substance of art. Without derision, one might say that The Earrings of Madame de… represents the apotheosis of the chick flick.