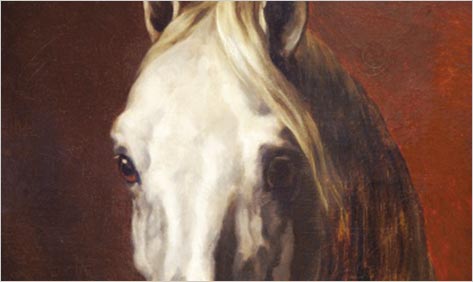 Of the many things that draw us to literature, I suspect no quality outright eclipses the appeal of sustained rapture. In this most exalted state, when a text cements us in its circle and coaxes us to absorb its thoughts — not just sympathize or argue with them — we do not devour a book. It devours us. Pierre Michon’s The Eleven — the winner of the French Academy’s Grand Prix du Roman — is such a beast. This thin novel takes the form of a monologue directed toward a silent gentleman who’s made his way to one of the Louvre’s innermost galleries.

On the wall before him, behind bulletproof glass, rests a portrait of eleven members of the Committee for Public Safety — the tight-fisted organization that steered France into the period of terror associated with the French Revolution. (Lacking among the depictions of Robespierre, Saint-Juste, Couthon, and the rest is Marie-Jean Hérault de Séchelle, who fell afoul of his fellow Committee members and was guillotined on April 5, 1794.) According to the narrator, this imposing masterwork — attributed to François-Élise Corentin — is an exquisite fluke of history:  “a painting — that Robespierre did not want at any price that the others hardly wanted, that maybe ten out of eleven did not want (Are we tyrants, that our Images be worshipped the abhorred place of tyrants?), but which was ordered, paid for, and made. Because even Robespierre feared the Hôtel de Ville, because History has a pocket for luck in its belt, a special purse to pay for impossible things.”

Given the iconic status of the French Revolution, the narrator’s confidence in retelling Corentin’s path towards The Eleven is remarkable:

Finally, Sir, I want to repeat here the reason for the commission, its small necessary and sufficient cause, the design of its sponsors. Who they are. And I know very well that you have read it — but I know you, Sir, you and your kind: in your reading you go immediately to what shines and what you crave, the skirts of maman-putain [mother-whore], the plume, the gold coins; or what is perfectly matte black, the guillotine, Shakespeare; but the political quibbling you find tiresome, you skim over it. The drab history and theory, the class struggle and the infighting, you tell yourself you will read all that tomorrow. And I know very well that you do not need to hear it, but I need to tell you.

But so engrossing is the narrator’s representation of Corentin’s world —  his childhood and his family history — that I found myself on Wikipedia double-checking his status as a fictional character. Indeed, there are passages in the book that give off the pungency of a lived truth. For instance, here is a sketch of the artist as a boy:

As for myself, knowing him a little from my long familiarity with The Eleven, I can hardly believe that he suffered as a child from the absence of his father, as has so often been said; no, the father’s departure, the loss of the father, was not a cause of suffering for him, but an extraordinary relief, an unhoped-for crown… That father was the only notable rival, the living one, the one who speaks in your presence and is not of your opinion; and, with this rival overcome, transformed with the wave of a magic wand into a shadow one spoke of with disapproval and regret, he, François-Élise, had entirely at his disposal – well, almost – those two skirts [his mother and grandmother] for whom he was the single object.

That is exorbitant, Sir: whoever has not experienced it does not know the pleasure of living. He has not the slightest idea what a reign is, that is, the gift of having at his disposal and under his command not chimeras or specters, or what amounts to the same thing, the bodies of constrained slaves, as we all do, but living souls in living bodies — a gift, truly obtained without the least violence, without effort or toil, by sole virtue of the Holy Spirit, or by the more mechanical virtue of one of those celestial decrees that were idolized at that time, the Universal Law of Attraction, the Fall of Earthly Bodies.

The many wonderful aspects of this passage — its feeling for art, its psychological acuity, its inclination for the grand statement, and its appeal to the lofty — are multiplied throughout The Eleven to glorious ends. I cannot recommend the book highly enough.