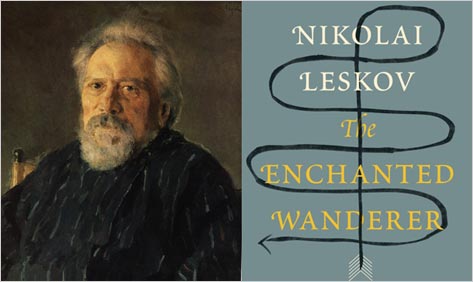 Many years ago I came across the stories of the nineteenth-century Russian writer Nikolai Leskov (1831–95) in David Magarshack’s translation of five of his tales, a volume which cycles in and out of print according to some invisible tide.  I became an ardent fan, thus putting myself in the company of — among many others — Ivan Turgenev, Maxim Gorky, V. S. Pritchett, and, indeed, of the great Russian people themselves, who, unlike the critics of his time, loved his work.  Nonetheless, only once in a while do I meet anyone else who has ever even heard of this superbly comic, ultimately kindly writer.  It is still inexplicable to me why Leskov has failed to catch on in the Anglophone world, but perhaps now that he is being ushered into English again, this time by that famous duo of Englishers, Richard Pevear and Larissa Volokhonsky in The Enchanted Wanderer and Other Stories, he will stick around.

The book consists of seventeen stories, including the author’s most famous, most chilling one, “The Lady Macbeth of Mtsensk” (upon which Shostakovich’s opera is based).  It sets off like this: “In our parts such characters sometimes turn up that, however many years ago you met them, you can never recall them without an inner trembling.”  The character in question is Katerina Lvovna Izmailova, the much younger wife of a rich merchant whom she does not love.  She is childless, cooped up under the stern eye of both husband and father-in-law, and is prey to soul-crushing boredom, a specialty of Russian writers.  In this case, it is the all-encompassing smother of “the boredom of a merchant’s house, from which they say you could even happily hang yourself.” Enter one of her husband’s young workmen, and after a short round of badinage the two end up in the marital bedroom, the result described with the biting, understated Russian irony that is everywhere in Leskov: “A hush fell over the room, broken only by the measured ticking of her husband’s pocket watch, hanging over the head of Katerina Lvovna’s bed; but it did not interfere with anything.”

Despite the narrator’s affectation of discretion, what follows is a tale of murder and jealousy and wicked revenge, events related with horror and — storytellers being only human — macabre gratification.  Leskov, himself, said that his own hair stood on end as he wrote it and he resolved never to write such a tale again.  This is not to say that he avoided tragedy and ill deeds: his stories are full of both, but in them he treats calamity with what I think of as Russian festivity.  His narrators, always present and free with their views, are connoisseurs of misfortune, taking a certain relish in piling it on, so much so that it is almost funny.  Fate delivers blows in almost every tale, but it dishes out a real pasting to the hero of the novella “The Enchanted Wanderer.”  This is a man who must travel not one ordeal-strewn road, but two; for, somehow, in the fantastical logic that pervades these pages, by attempting to avoid his own destiny, he becomes entangled in another’s.

The stories — and stories within stories — meander through the overlapping natural and supernatural territories of Russian cosmology, and up and down the social order from peasant to Emperor, often continuing well beyond where ordinary reason would suggest.  The tales are replete with miscellaneous, wryly described detail, side observations, and esoteric theories confidentially offered as gifts to understanding.  A group of friends sitting around lamenting the poverty of invention in modern literature in “The Pearl Necklace” gives us an idea of what Leskov thought he was up to in these rich and rambling tales.   Quoting the Russian writer Pisemsky, one friend attributes the age’s literary insipidness to “the multiplication of railroads” which has made travel so easy and quick that people no longer absorb detail and impressions; thus their writing is “ding-ding-ding and that’s it.”  It is just the sort of crank theory Leskov likes, though in this case it not only possesses a loony sagacity, but it also reflects his own experience travelling across Russia among the common people as assistant to a steward of many estates.

The telling of these tales is as important as what is told and in a story like “The Sealed Angel” the circumstances — a crowded roadside inn during a storm with everyone hunkered down in the dark while a voice from the corner tells a long and astonishing tale — add considerably to their eccentric charm.  The storytellers proceed with a personal, insistent, even proprietary air, apologizing for occasional gaps in memory or detail, providing sympathetic commentary on their characters’ predicaments, edifying their listeners with illustrations of the penalties of resentment, rivalry, and schadenfreude, and extolling the wonders of the Russia of an earlier age.

There is no point in summarizing the plots of these stories — they range all over the place and their greatness lies in the journey, in the narrative excursions, their grace notes and dry, ironical wit.  My favorite of all is “Lefty” which begins with Alexander I travelling through Europe after the Congress of Vienna, showing what his aide, Platov, considers an unseemly interest in foreign accomplishments.  Platov attempts to distract the great man from these, and is successful until confronted with the wily English.  They produce an almost invisible dancing flea made of English steel, and this the emperor brings home with him.  In the fullness of time — and I do mean full, as it includes the accession to the throne of Nicholas I, much experimentation and use of icons on the part of the most skilled Russian gunsmiths including a cross-eyed, left-handed craftsman — a tiny steel Russian flea is produced.  It, however, cannot dance, thanks, we discover (eventually), to its being weighed down, having been shod with the tiniest of tiny horseshoes affixed to the flea’s little feet with infinitesimally minute nails, these last the work of our left-handed friend whose adventures the story now veers off to follow.  This brings us back to England and the craftsman’s admission: “ ‘There’s no disputing,’ he said, ‘that we haven’t got far in learning, but, then, we are faithfully devoted to our fatherland.’ ”

Here I must say that, knowing no Russian, I can’t judge a translation’s faithfulness to either the letter or the spirit of the original.  But I do think about it when I find that David Magarshack translates that last line this way: “ ‘We needn’t argue about that,’ he said.  ‘It is quite true that we haven’t advanced far in science, but we’ve always been loyal sons of our motherland.’ ” It is not so much that Pevear and Volokhonski prefer “fatherland” to “motherland,” though I certainly don’t, but the way Magarshack puts it better realizes Leskov’s gift for the non sequiturs that his characters consider simple reason, and is thus more subtly amusing.  Earlier in the same story we find Pevear and Volokhonsky have the emperor chiding Platov: “Please, don’t spoil the politics on me.” while Magarshack has him saying, “Look here, don’t you go interfering with my politics!” which sounds much better to me.  On the other hand, Pevear and Volokhonsky are more alert to imperial dignity when they have Alexander say, “Well, that’ll do now,” while Magarshack seems to be channeling Bertie Wooster with “This has jolly well got to stop.”  In the end, however, let there be no begrudgers.  The present volume gives us a dozen more stories than the earlier one and for that we should be, as I am, extremely grateful.