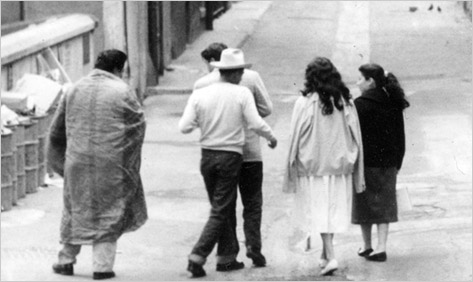 In 1958, a young USC film grad named Kent Mackenzie began work on The Exiles, “the authentic account” of young men loitering, drinking, and toiling in Los Angeles’s Bunker Hill neighborhood.  This Native American Graffiti, steeped in improvised dialogue and wild naturalism, was put together as John Cassavettes was tinkering with his two versions of Shadows on the other coast.  Both Cassavettes and Mackenzie were unable to find distribution, although Cassavettes garnered acclaim at film festivals while Mackenzie’s gritty masterpiece gathered dust and underground buzz.

But now this vital and entertaining film has been restored and released.  The remarkably crisp restoration features bars and supermarkets that no longer exist and the old Angels Flight trolley making its recurrent diagonal climb.  Voieover testimonials buttress the dirty realism, which includes unapologetic burps during pork chop dinners, glimpses at reservations triggered by letters, inebriated walks through tunnels, abandoned mothers who must endure their partners pilfering rent money to play poker, early morning tribal songs punctuated by fistfights and car horns, and a desperate mimicking of piano upon a bar’s sticky surface.  The alternative to these raucous follies are women confined to their apartments – some of them expecting more children and nearly all quiet enduring their adulterating and alcoholic husbands.  Solace comes through solo trips to the movies and lonely uphill strolls past donut shops and pharmacies.  But all of this is presented without judgment.  And it’s the little details, such as a man sitting at a bar with a magazine covering his face, that create the feel of a living and breathing document.

The film itself should be enough, but the double DVD set is greatly augmented by a smorgasbord of extras, which include two audio appearances from the ebullient Sherman Alexie, where he confesses how hard it is to make non-stereotypical Native American cinema.  Thankfully, this must-have film exists to provide succor and inspiration for future filmmakers hoping to beat the odds.