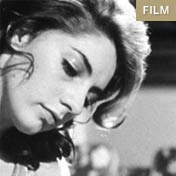 Not discounting the hunger, the double suicide, and the reek of trapped human flesh, Luis Buñuel ‘s The Exterminating Angel (1962) is a chirpy film, informed by an impish existentialism. This surrealist appropriation of the comedy of manners starts as an upstairs-downstairs farce where the servants of a landed couple forsake their duties just as their employers’ dinner party guests begin to arrive. Their unexpected leave-taking does little to dampen the decadent evening that follows in which, among other incidents, a server carrying a food-laden ice sculpture purposefully trips himself up (a detail Buñuel struck upon after learning that such a ruse had been used to entertain the guests at a gala in New York). At length, the revelers stir as if to leave; but instead of collecting their overcoats, they tuck into whatever space is available in a salon, where they’d previously been entertained by the performance of a sonata, and go to sleep. Upon waking, a fiasco sets in when it’s discovered that, for no apparent reason, they’re unable to leave the room. As vital resources diminish, the trappings of civilization crumble until the threat of murder hangs in the air. When asked about the obvious parallels between his film and Sartre’s play No Exit — both trade on the idea that when relations with others become warped, the isolation of the self is reinforced and a personal hell is birthed — Buñuel said, “I think there is more mystery in The Exterminating Angel or if you like, simply more irrationality.” While not in the same league as some of the director’s other films, like Diary of a Chambermaid and The Phantom of Liberty, Buñuel ‘s parable about the spirit of barbarism waiting in the wings of even the most genteel society is, unfortunately, as relevant now as it was nearly half a century ago.

Previous Previous Post: The Invention of Air: A Story of Science, Revolution, and the Birth of America
Next Post: Life, Inc. Next