Chigozie Obioma’s remarkable novel, The Fishermen, begins in January 1996, in the Nigerian town of Akure, when the story’s narrator, Benjamin Agwu, is nine years old. He is the fourth of his parents’ six children, the oldest of whom is Ikenna, fifteen. The boys’ father, proud of his prolific siring, has mapped out glorious futures for his sons: doctor, lawyer, pilot, professor, veterinarian. Fatally — or fatefully — however, he has just announced that he must leave his family, as the bank he works for has transferred him to a branch “a camel distance of more than one thousand kilometers away.” The news is a blow, especially to the children’s mother, who, after protesting in vain, “acquired the gait of a wet mouse, averting her eyes as she went about the house.” Though her husband will come home every fortnight, she believes that without his disciplinary and directing hand, the family will fall into disorder — that, to take up an echo that sounds through the novel, things will fall apart.

We know from Ben’s doomy voice at the outset that this indeed will be the case. Although it’s forbidden, the four older boys and some of their friends take up fishing in the nearby river, a body of water about which terrible tales of grisly rituals and murder are told. One day the local madman, Abulu, shows up. Hit by a car as a child, his “brain cells . . . had floated out of their compartments into foreign zones in his head,”  and he is now a horrifyingly filthy transgressor of every possible rule of decency. Worse, he is believed to possess the gift of prophecy and a tongue that “harbored a catalogue of catastrophes.” The wretched man now declares that Ikenna will be killed by a fisherman, by which the boy understands that one of his brothers will murder him. Paranoia begins to unravel his own brain:

[T]he prophecy, like an angered beast, had gone berserk and was destroying his mind with the ferocity of madness . . . until all that he knew, all that was him, all that had become him was left in disarray. To my brother, Ikenna, the fear of death as prophesied by Abulu had become palpable, a caged world within which he was irretrievably trapped, and beyond which nothing else existed. 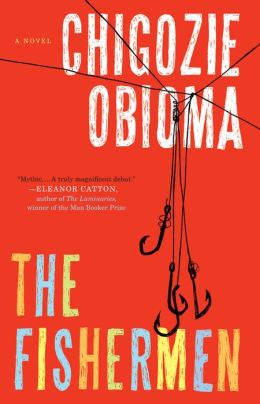 This caged world is not a solely literary metaphor; it also reflects the habits of mind of the novel’s characters. Obioma conveys the sense in which his subjects understand and live their lives within narrative frameworks and through analogy in a way that we, in the West, with our simple faith in empiricism and self-determination, do not. Ben’s voice comes out of an oral storytelling tradition, rich in sly humor, omens, and archetypes drawn from the natural world. Although his relation of events possesses the feel of a tale bearing a lesson — whether it concerns prudence, morality, or inescapable fate — the novel is, I am happy to say, the farthest thing from a fable and  all the solemn portentousness that, I at least, associate with that.

The Fishermen is a realistic work of fiction, precisely and abundantly detailed and emphatically seated in a specific historical time and place. We become privy to the family’s home life; its staple food (yams, black-eyed peas, palm oil); details of the house and furnishings (the refrigerator on its high legs, the TV proud on its eight-columned shelf); the courtyard and street; and the landscape farther away, down by the river and on the roads. We also learn the place of language in the family’s life: They are Ibo in a town whose majority is Yoruba. The parents speak Igbo to their children, while among themselves Ben and his brothers speak Yoruba, the language of their peers. But English, the official language of Nigeria, also has a place, both inside and outside the family. Ben explains that it is “a formal language with which strangers and non-relatives addressed you. It had the potency of digging craters between you and your friends or relatives if one of you switched to using it. So, our parents hardly spoke English, except . . . when the words were intended to pull the ground from beneath our feet.” Ben’s parents, alas, find more than sufficient reason to use it.

Ikenna’s first truly outrageous act of madness is to burn one of the family’s prized possessions, a calendar photo of the Nigerian Social Democratic Party’s anti-corruption presidential candidate, M.K.O (Moshood Abiola) flanked by two Agwu brothers on either side — the story of how that came about being essential to the family’s history. Later Ikenna destroys the only possession more valuable than that: a copy of the Akure Herald from June 15, 1993, with a photo of the four oldest boys and the headline Young hero drives his younger brothers to safety and an accompanying story telling how Ikenna commandeered a van and saved his brothers from the riot that broke out after the military government’s annulment of the election M.K.O won.

In this way, the novel — like Chinua Achebe‘s, to which it pays homage — is wedded to Nigeria’s national history, its aspirations, conflicts, and civil upheavals. Later, a signal event further tightens the bond with an arresting image: Ben describes a stabbing in the family’s kitchen: The victim’s blood “journeyed under the refrigerator, and uncannily — like the rivers Niger and Benue whose confluence at Lokoja birthed a broken and mucky nation — joined with the palm oil, forming an unearthly pool of bleached red.”

Obioma brings terrific authorial dexterity to the family’s story and its small place in Nigeria, and evokes a worldview which brings with it a terrible tragedy. This is the best novel I have read so far this year, and that, I can assure you, is saying plenty.

Previous Previous Post: Broadcast Hysteria: Orson Welles's "War of the Worlds" and the Art of Fake News
Next Post: Missoula: Rape and the Justice System in a College Town Next