The Fruit Hunters: A Story of Nature, Adventure, Commerce, and Obsession 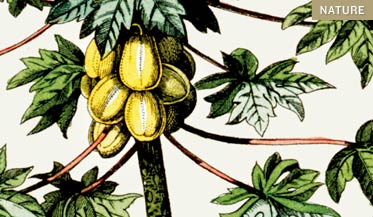 I don?t remember how I acquired the ability, frankly, or who taught me the secret, or how long ago, but I am proud of the fact that I can choose a proper melon, firm and sweet. A man I once knew told me he considered this talent an important feminine wile.

My melon knack made me think I understood something profound about fruit, but having just read The Fruit Hunters by Adam Leith Gollner, I concede I was almost completely ignorant of the subject. Not only did Gollner drop the names of at least three dozen fruits I had never so much as heard of — including galangal, salak, jambu, sapote, voavanga, farkleberry, ballion, and oyster nut — but he also introduced me to a subculture of agriculture peopled by the likes of fruitarians, fruitleggers, fruities, fruit nerds, fruit groupies, the Fruit Mafia, the Fruit Crank, and one self-appointed Fruit Detective.


Rarely have I read a book so dense with information and yet so engaging. Vast numbers of facts fill these pages, buoyed by an abundance of improbable anecdotes. At times the text has a haphazard feel, as when Gollner recounts his difficulties securing certain desired interviews (or when he quotes too heavily from those he does secure), but overall he ably imparts the essence of fruit: its diversity, versatility, appeal, and fragility.

What anchors the wide-ranging narrative is its author — a man with a raunchy, goofy sense of humor who admits to having loved Froot Loops as a child. The older, wiser Gollner authoritatively compares Froot Loops’ taste to that of the perfumed chempedak (“a long, army-green fruit the size of a rugby ball” that grows in Borneo and is filled “with honey-sweet orange chunklets”). Relating his story in the first person, Gollner is as much a memoirist as an encyclopedist, with intimate tales of exploits among juicy things. In fact, his descriptions of ecstatic sensations in the “pursuit of fruit” often sound like sexual conquests. But then, fruit is the ultimate X-food: “All fruits start as flowers. At their most basic level, flowers are the plant kingdom?s sex machines. When, in the eighteenth century, it was discovered that flowers had male and female reproductive anatomy, the public and the church reacted with outrage. Botanist Carl Linnaeus?s description of a flower as numerous women in bed with the same man was vilified as ‘loathsome harlotry.'”

The book?s other anchor is Gollner?s actress girlfriend and sometimes travel companion, Liane. If he is Adam, tasting fruits like the first man, “Liane” is literally the vine of the fruit. The admiring Fruit Detective, who points out the felicity of Liane?s name, dubs her “the divine Miss Vine.”

Here I?d like to mention a few more fruits with names that flow like nectar on the tongue: durian, rambutan, pulasan, duku, langsat, gungung. Except for the durian, which has gained cachet in Manhattan, you have to go to Borneo if you want to eat any of these “ultraexotics.” (And also if you want fresh durian.)

“Go to Borneo” is the sort of thing Gollner does — on a whim and a freelance magazine assignment — as his fruit passion takes hold, and of course he takes the reader along. Accustomed as I am to traveling vicariously with intrepid, experienced adventurers, I found Gollner an amiable, often pitiable companion. “Clouds of mosquitoes trail me wherever I go,” he reports from Borneo. “Although I?m taking anti-malarials, the travel clinic warned me that there?s no vaccination against insect-borne dengue fever.” In Cameroon, where he stalks the miracle fruit (famed for its ability to make sour things taste sweet), “I pay off a guard to get my bags through customs. Outside, a dozen red-eyed young men immediately pounce on me, barking information and offering services ranging from hotels and taxis to relieving me of my possessions.”

Turning to the dark side of fruit, Gollner recounts a brief history of United Fruit?s abuses. In a similarly serious tone he laments the dependence of fruit production on “migrant laborers who live in subhuman conditions. American fruit pickers aren?t farmers or peasants. Many are indentured workers handcuffed by sharecropping agreements. Most of these 1.3 million nomads consider themselves lucky to make minimum wage. They own next to nothing. They have shortened life expectancy rates. They live in cars, caves, and squalid camps full of cardboard tents and plastic sheets.”

All the while Gollner was seeking out strange fruits, he was also satisfying a hunger for literary allusions to them. Some of these excerpts appear as epigraphs, such as T. S. Eliot?s question “Do I dare to eat a peach?” from “The Lovesong of J. Alfred Prufrock,” which heads Chapter 11. Other quotations are folded into the text at opportune moments, as when the Chapter 12 discussion of determining the ripeness of pears winds up with an observation by Ralph Waldo Emerson: “There is only ten minutes in the life of a pear when it is perfect to eat.” Goethe gets credit for noticing “how fruits arise as flowers ‘die into being.’ ”

Every now and then Gollner makes a questionable claim that jeopardizes his credibility, as when he mentions that NASA astronauts are growing fresh strawberries on board flights to Mars. But no NASA astronauts, or astronauts from any other space agencies, are currently en route to Mars. No doubt when they do go, they will grow fresh strawberries — and these will be a great improvement over the freeze-dried ones served up on previous missions.

Elsewhere he credits Apollo of Greek myth with inventing the first musical instrument, a lute — by carving it out of a melon slice. But it was a tortoise shell, wasn?t it? And although he says, “Cashew nuts are highly toxic till roasted,” raw cashews are a staple of my diet.

The book?s overriding message is that nature produces an almost limitless variety of fruit — a fruit for every taste and for every purpose (nutritional, medicinal, or recreational). The great pity is, you?ll probably never see even a fraction of this bounty, let alone taste it. The best you can do is read about it.

Author Adam Leith Gollner responds:
Thank you for the wonderful review. I just wanted to clarify a couple of points:

1) They may not be en route, granted, but NASA is already growing strawberries in “spacecraft like conditions” in preparation for Mars voyages. Read more here:
http://www.nasa.gov/missions/science/f_strawberries.html

2) As Robert Palter points out in The Duchess of Malfi?s Apricots (p. 441), in Greek mythology Apollo carved the first ever musical instrument, a lute, from a melon. It was his lyre that was a tortoise shell.

3) Unprocessed, raw cashews are indeed toxic. The so-called “raw cashews” we buy at grocery stores aren?t actually raw; they are processed and have had their toxins removed. Readers who find themselves in contact with true raw cashews should proceed with extreme caution. For more, read here: