The Ghosts of Wrath 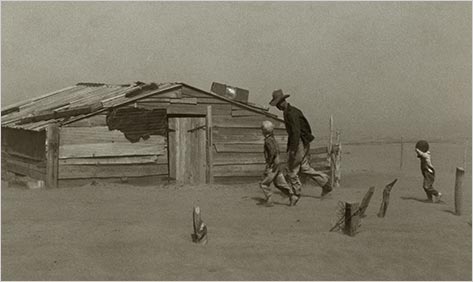 Freedom in America has always been entwined with freedom of movement. The freedom to immigrate, the freedom to relocate from one state to the next, the freedom to wander without being hassled. That’s one of the reasons John Steinbeck’s coruscating epic of exodus, The Grapes of Wrath, hit bestseller lists like a bomb when it was published in 1939. It wasn’t a novel about people taking wing and transforming themselves in new settings. Steinbeck showed Americans heading west to better themselves like waves of people before them, only to be blocked, harried, fenced in, run off, denied.

Seventy-five years later, the novel still speaks to us for this same reason. For decades we have been told the world is growing ever more free and open. At the same time, the news is filled with stories of families, whole peoples, pushed out of one place and made unwelcome in many others. Steinbeck’s Joads, a family of Oklahoma farmers, head to California after the Dust Bowl kills their farm and the bank takes it. They’re a large brood, rendered brightly and compassionately by a reportorial novelist who believed he had found the true, beating heart of America.

Steinbeck’s hero of sorts is the oldest son, Tom, paroled from prison after serving four years for murdering a man in self-defense. Steinbeck folds in several other memorable characters, from indomitable Ma, “the citadel of the family,” to the ex-preacher Casey, who functions as something of a chorus. (On a more practical level, he gives Tom somebody to talk to; the prodigal Joad isn’t even reunited with his family until the book is over seventy pages in.)

The novel unfolds in long, lyrical sections that combine lilting rhapsodies  to the landscape and people living in it with a sinewy and journalistic focus on the catastrophe overwhelming both. Writing with rhythms that draw equally on biblical intonations and the majesty of a ruined nature, Steinbeck opens up the dry, blasted wasteland of Oklahoma, where the lives of generations of farming families has literally blown away in the apocalyptic dust storms. Like so many refugees before and since, they’re distrusted and scorned by those whose land they must cross or settle on. They have been transformed from individuals into faceless “Okies.” Their poverty, the very thing forcing them to cross hundreds of miles in search of the farm work promised in the handbills littered around the Midwest, is seen as a badge of shame and a reason to despise them. The Joads just want to work.

“They hoped to find a home,” Steinbeck writes, “and they found only hatred.” Foreigners in their own country, the Joads learn that the legal fact of citizenship doesn’t always equate to the reality. The tragic distance between these two states fuels the fury that’s shot through The Grapes of Wrath like barbed wire. “Who can we shoot?” asks one of Steinbeck’s farmers to the tractor driver who’s about to destroy his farmhouse. “I don’t aim to starve to death before I kill the man that’s starving me.” “Maybe there’s nobody to shoot,” is the laconic response.

As Steinbeck scholar Susan Shillinglaw writes in her excellent new short study, On Reading “The Grapes of Wrath,” Steinbeck had reason to be angry. Raised in the farming town of Salinas in California’s Central Valley, he knew exactly how migrant workers were exploited in a borderline feudal system that shares uncomfortable similarities with that of today. Steinbeck took it all in — the ruthless tactics of agents provocateurs, the deceptive practices of farmers who promised a good wage and payed a miserable one, and the squads of porcine tin-star deputies who ran workers out of town the second the harvest was done and smeared as “red” anybody who spoke out of turn. This isn’t just a great American novel, it’s a great revolutionary novel.

Although angry and stiffened with fatalism, The Grapes of Wrath never gives in to despair or cynicism. There is less of the hammy rhetoric spliced into John Ford’s grandiloquent and otherwise generally faithful film adaptation. But Steinbeck’s pure, unadulterated love for his Okies reverberates on each cleanly chiseled page. At makeshift campsites, they come together in small, fluid communities characterized by a deep generosity of spirit: “twenty families became one family, the children were the children of all.” But strong though they might be, the odds are stacked against them, and when they are forced to move on, “the cars of the migrant people crawled out like bugs.” Movement might be an American dream, but for the Okies it is the enemy, Ma enjoining Tom to help her keep the family together even as desertion and death claims one Joad after another.

The novel’s ambitious scope and resolute sense of history-in-the-making ensures that Steinbeck’s greatest achievement retains its gripping force today. Steinbeck took hold of a singularly disastrous moment in the nation’s history and parsed it with an elegantly enraged precision whose humanistic fury still generates heat — and light.