The Hours of Catherine of Cleves 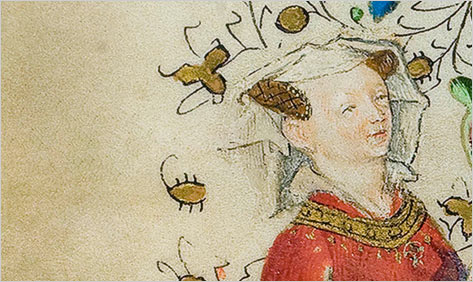 It’s a wondrous, humanizing touch. Mary kneels before the Holy Sepulchre, witness to the Ascension of her son to Heaven. But instead of the usual grouping of saints around the Virgin, she is alone. And far from pondering her son’s full form, all we see are his feet — the rest having been already swallowed up by the blue sky. It’s utterly unexpected and a sudden reminder of the active intelligence behind any great work of art. Once, long ago, a painter sat making decisions on how to depict the scenes of the Bible. Most he would tackle along lines laid down long before, but sometimes he might just try something a little different. Perhaps depicting just the feet of Christ was a simple compromise with the space available; perhaps it was a bit of lightheartedness. Looking at the disappearing feet is the closest I can come to knowing the Netherlandish painter we call the Master of the Hours of Catherine of Cleves. Circa 1440, he created more than 150 illuminations for a book of hours, and together they form one of the very greatest works of art of the 15th century — the century of Raphael and Michelangelo, of van Eyck and Rogier van der Weyden. As illuminated art, they are rivaled only by the two great sets of hours done by the Brothers Limbourg for Jean, Duc de Berry.

The Hours of Catherine of Cleves has had an unusual history. In the middle of the 19th century, the book was rebound into two volumes by an unscrupulous art dealer and sold twice — to Adolphe de Rothschild and the Duke of Arenberg. It was only in 1963, when the Morgan Library acquired the Rothschild volume, that it was discovered they were parts of the same whole. Kitty — as the book is known at the Morgan, which eventually got the Arenberg manuscript as well — was exhibited to great acclaim in 1964. One of the visitors was the art book publisher George Braziller, who was thrilled enough by the encounter to publish a sumptuous version of the Hours at their actual size. It became a surprise bestseller and put manuscript illumination on the map of American cultural life. The Braziller volume is still in print, having been revised as printing technology improved over the decades. Its size makes it the perfect instrument for bringing us close to the illuminations, letting us see them as they were intended.

For illumination is a difficult art form to see in a museum. The miniature paintings beg you to come close: to flip back and forth amongst the pages and revel in the tiniest details. For all but the most privileged curators, though, such work remains a tease — a book open to a single folio behind the glass of a vitrine. For this reason, the Morgan’s decision to rebind the two sections of Kitty back into a single book was immensely important. With the books cut apart, all of the illuminations could be exhibited at one time and at eye level. It was finally possible to see the Hours whole, up-close and in a single afternoon. You still wanted to cradle them, but the exhibit was something memorable and marvelous.

And the catalog of the show is one of the finest studies of illumination yet made. The plates of Kitty are enlarged and superbly colored. There are contextualizing works from Netherlandish painting and accessible scholarship drawing on decades of discovery in the field. You’ll still want the Braziller facsimile — which is a complete record of the Hours and allows the joy of holding it close and flipping pages. But the Morgan catalog, published by Abrams, is as good a way to enjoy the glories of illuminated manuscripts as most of us are ever going to get.