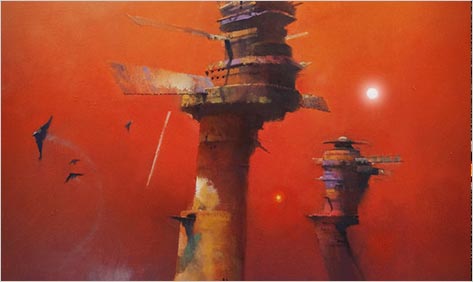 War has always been a part of science fiction.  Even before the birth of SF as a standalone genre in 1926, speculative novels such as The Battle of Dorking from 1871 showed how SF’s trademark “what if” scenarios could easily encompass warfare.  Verne and Wells certainly featured combat in many iterations, with Wells especially being credited with a host of brilliant predictions (The War of the Worlds, after all, ends with the intimation of biological agents as the deciding factor in a world-shaking conflict).  And a surfeit of novels featuring the “Yellow Peril“—invasions from Asia—once plagued the field.  Even the great Buck Rogers began as a warrior against the evil “Mongol” conquerors of the USA.

When E. E. “Doc” Smith opened up the galaxies with 1928’s The Skylark of Space, warfare moved off Earth and escalated to titanic battles between fleets of starships boasting incredible technologies of destruction and representing rival interstellar empires, both human and alien.  Certainly the Star Wars franchise continues this mode into the present.

But Military Science Fiction as a recognizable category was born with the 1959 publication of Robert Heinlein’s Starship Troopers.  Heinlein’s own military background endowed his characters and futuristic institutions and battles with an almost Maileresque verisimilitude missing from earlier works.  His grunt-level perspective had the reader in the trenches rather than behind the controls of a mighty battle cruiser.  And his musings on the interplay between civilians and the military established his soldiers as a privileged breed apart from those they protected:  misunderstood, heroic, but also partly damned by their vocation.

Since then, it’s safe to say that every book in this subgenre has been written in Heinlein’s shadow, with writers either deliberately cloaking themselves in his aura or trying to step out from under his influence into a new and possibly even contrary story-space.  There have been stories whose hearts could be emplaced all across the political spectrum, and with a spotlight shifting up and down the chain of command, from GI to general.  Individual warriors have been portrayed along a vector of all-too-human to quasi-cyborg and  engineered posthuman.  Numerous alien adversaries and allies have been conjured up.  As mentioned earlier, postmodern space opera maintains the tradition of big extravagant clashes between vast fleets in space, while smallish planetary campaigns of conquest, such as we see in the film Avatar, also receive attention.  Aficionados of military science fiction can choose from the heterogeneous works of Joe Haldeman, Lois McMaster Bujold, David Weber, Iain Banks, M. John Harrison, Elizabeth Moon, A. Bertram Chandler, Robert Buettner and David Drake.  (Most of this history is encapsulated in the “Military SF” entry in The Science Fiction Encyclopedia, which certainly rewards the reading.)

Unquestionably, one of the major recent success stories in this vein has been the career of John Scalzi.  His popular debut book, Old Man’s War, firmly ensconced him in the ranks of Heinlein’s Martial Heirs.  And while Scalzi has branched out into a number of different modes, his Old Man’s War series—the first book was followed by The Ghost Brigades, The Last Colony, and Zoe’s Tale—remain his most fan-acclaimed and famous franchise.

Now comes the latest installment, The Human Division, which started life in a unique and triumphal, even groundbreaking fashion.  The book was conceived and written to facilitate publication as thirteen self-climactic ebook episodes, now gathered together under covers with some bonus material for those who waited.  Given the increasingly large market for short-form ebooks,  Scalzi has been able to achieve what even Stephen King could not when he attempted to serialize The Plant  in the still-young Internet environment of the year 2000.

Episode One, “The B-Team,” is considerably longer than any of the others, save for bookending Episode Thirteen, and is calculated to serve the purpose of setup and introductory adventure in a generous, reader-friendly fashion.  One immediately feels at home in Scalzi’s universe, even without prior experience of the series, and in for a thrilling ride.  We learn that a few centuries ahead of our era,  the human presence in the galaxy, the Colonial Union, is under pressure from both hundreds of rival alien groups and from a dissident mother planet, Earth.  An engaging squad of soldiers and diplomats—Lieutenant Harry Wilson, Ambassador Ode Abumwe and Abumwe’s assistant, Hart Schmidt, chief among them—must salvage peace talks with the Utche while under assault from what appears to be mysterious and  traitorous fellow humans.  In Scalzi’s trademark recipe, suspense and Realpolitik alternate with humorous banter and bureaucratic machinations to charming effect.  And of course, numerous plot seeds are planted to carry us forward, as novels must.

Episode Two, “Walk the Plank,” finds Scalzi agreeably changing up the cast and even his format (the episode is cast as the transcript of an interview), to chronicle an instance of space piracy in orbit around the “wildcat colony” of New Seattle.  Once again, the narrative is satisfactorily rounded, while also feeding directly into Episode Three, “We Only Need the Heads,” which reunites us with Schmidt, Wilson, and Abumwe.

By this point, the reader feels confident that the episodic composition and publication of The Human Division has been engineered to a consistent plan based on an organic vision like that behind any otherwise conceived longform fiction.  And after all, writers from Dumas and Dickens onward have been serializing their work for centuries without any incoherence in their larger narrative arcs.  Why not the talented Scalzi?

What also emerges by this point is the realization that The Human Division is not going to resemble the type of military SF full of relentless frontline combat.  Rather, it harkens to the work of such predecessors as Christopher Anvil and Poul Anderson and  Keith Laumer, whose tales traditionally blended battles of wits with sporadic bouts of thoughtful and even reluctant violence.

And so the book progresses from one feint to another, with Scalzi very carefully alternating venues and tonal signatures.  Episode Seven, “The Dog King,” is almost farcical in nature, while Episode Eight, “The Sound of Rebellion,” is rather a bloody James Bond adventure.  And Scalzi makes sure to swivel the kleig lights alternately onto Schmidt, Wilson and Abumwe, bringing out their individual depths.  (Captain Coloma of the Clarke, featured right from the first episode, is the fourth nexus of action and character development.)

Along the way, Scalzi examines a host of big themes, including individual responsibility, human destiny, cultural imperatives and media manipulation of history and public opinion.  A section such as Episode Ten, “This Must Be the Place,” in which Deputy Ambassador Schmidt takes some R&R at his familial home, invokes comparisons to the more philosophical passages in Asimov’s Foundation series.  Nor does he omit some nifty speculative conceits, essential for any SF worth its salt.  The big hook in the original Old Man’s War was taking the feeble elderly and rebuilding them to become super soldiers.  Scalzi explores this trope further in the person of Wilson, a kind jaunty ninety-year-old version of Heinlein’s Competent Man.  And then we have lots of other riffs, from a “brain in a box” to various oddball aliens who recall the types in Scalzi’s The Android’s Dream.

The final episode, “Earth Below, Sky Above,” assembles most of the cast for some big set-piece heroics, bringing both the Colonial Union and the franchise itself to a new plateau. As for the two extra tales, they are pleasant diversions, but  not essential to the main telling.

Entertainingly exemplifying the maxim that “All diplomacy is a continuation of war by other means,” The Human Division is the type of intelligently crafted and inventive military-political science fiction that reminds us that though we might be able to pinpoint a genre’s takeoff point, nobody can predict how far it will fly.