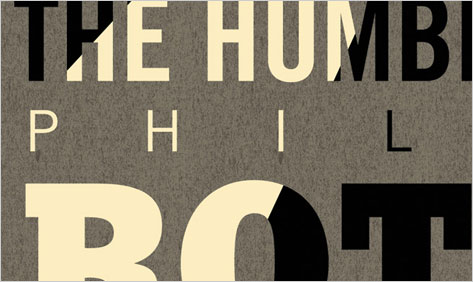 Philip Roth’s new novella, The Humbling, begins thus: “He’d lost his magic. The impulse was spent. He’d never failed in the theater, everything he had done had been strong and successful, and then the terrible thing happened: he couldn’t act.”

Immediately, I thought — I see, Roth is writing about his own sudden inability to write after a lifetime of pumping out a book a year, winning heaps of prizes and accolades, scaling the bestseller lists, and best of all, getting to spending his life writing primarily about himself, or various alter-ego-like versions thereof.

Aha! I thought. Obviously Roth is stuck, he’s in some kind of personal and/or artistic crisis, and he’s hoping to unstick himself by writing straight into the heart of the problem. I felt a certain degree of anticipation at the prospect of a metaphorical story of writers’ block by the prolific, masterful, seemingly unstoppable author of the likes of American Pastoral and The Counterlife.

But my anticipation quickly turned to perplexity and then disappointment. Simon Axler, who seems to be the latest incarnation of Roth’s alter ago, goes on in this same bleak, flat-footed vein about his sudden crisis of confidence for the entire first section, which is titled “Into Thin Air.” His wife leaves him, conveniently and rather unconvincingly; it scarcely seems to register for him that she’s gone. He checks himself in for a monthlong stint at a psychiatric hospital, where he meets a young woman in even worse shape than he is. He has a 13-page conversation with his agent that reads like a soliloquy in two voices in which his agent tries to talk him out of his failure while Simon keeps reiterating it. It reads very much as if Roth were simultaneously trying to talk himself out of and into something. Like the rest of the book, it is utterly without humor.

Simon says, “No, listen to me. I have a modicum of talent so I can at least imitate a talented person. But it was all a fluke, Jerry, a fluke that a talent was given to me, a fluke that it was taken away. This life’s a fluke from start to finish.”

“Oh stop this, Simon,” his agent says. “You can still hold attention the way a big star actor does on the stage. You are a titan, for God’s sake.”

Simon says, “No, it’s a matter of falseness, sheer falseness so pervasive that all I can do is stand on the stage and tell the audience, ‘I am a liar. And I can’t even lie well. I’m a fraud.’ ”

After this tedious, long-winded, ultimately pointless exchange, the section finishes with a resurgence of Simon’s ongoing contemplation of the predominance and moral rightness of suicide, real-life, theatrical, and his own hypothetical. There is, incidentally, a gun in the house. The house is, incidentally, in the country.

The theatrical, specifically Chekhovian, references echo throughout — appropriately enough, since Axler is an actor, but none too subtly or imaginatively. The novel is divided into three sections, or acts, of roughly equal length. In the second, “The Transformation,” Axler is seduced by the lithe, big-breasted, gamine daughter of two of his old friends, the 40-year-old Pegeen Mike Stapleton, who happens to be a (former) lesbian. The two, despite (or maybe because of) their 25-year age difference, begin a love affair.

In Part Two, Simon takes the tomboyish Pegeen shopping for feminine clothes and pays for her to get a $200 haircut. They have a lot of sex. Simon has back problems, so Pegeen has to ride him “like a horse.” She doesn’t seem to mind. He is famous and still handsome. Pegeen’s midwestern parents disapprove; her former lover, the dean of the college where she teaches, makes some vindictive, heartbroken trouble.

Simon and Pegeen talk about their relationship in detached, stilted dialogue that might cause an MFA student to be taken to task by her workshop: “You’re saying you don’t want to get out of this thing while the getting is good?” he asks Pegeen.

“Absolutely,” she replies. “I want you, you see. I’ve come to trust that I have you. Don’t pull away from me. I love this, and I don’t want it to stop. There’s nothing else I can say. All I can say is that I’ll try if you will. This is no longer just a fling.”

Roth seems aware of the shortcomings of this exchange: “She will say whatever she needs to say,” Axler thinks, “even if the dialogue verges on soap opera.”

But authorial self-awareness isn’t enough. If Roth is indeed writing about his own sudden inability to write, there is plenty of evidence here that he’s suffering from it. The premise is full of juicy, complicated potential — failed actor freezes onstage, goes nuts, loses his wife, gets caught up with a much-younger lesbian, etc. — but is inert and dull in its execution. Reading the second section, I developed a working theory that this book was written by a ghostwriter while Roth was undergoing a 26-day stint in a mental hospital. It still strikes me as viable, as does my other theory that Roth originally wrote this in Lithuanian to give himself something new to do, then hired a non-native, not very fluent English speaker to translate it into English.

The book ends on what should have been a dramatically and emotionally powerful note but which, given the book’s fumbling impotence, merely comes as a relief.

Kate Christensen is the author of the novels The Great Man, In the Drink, Jeremy Thrane, and The Epicure's Lament. Her essays and articles have appeared in various publications, including Salon, Mademoiselle, The Hartford Courant, Elle, and the bestselling anthology The Bitch in the House. She lives in Brooklyn.