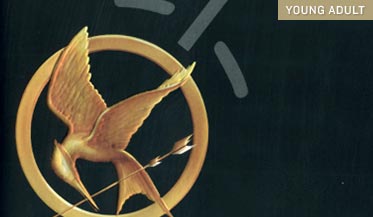 Sixteen-year-old Katniss is smart, athletic, and fast. She can take down a rabbit with a bow and arrow, hitting it straight through the eye. Will these skills be enough to survive the Hunger Games?

Suzanne Collins, the author of the middle-grade fantasy series The Underland Chronicles begins anew, exploring a future landscape that will be familiar to devotees of science fiction’s dystopic strain. In a nation called Panem, which occupies the landmass that is the present United States, a parasitical fascist Capitol dominates 12 conquered districts. There was a thirteenth district but it was obliterated during a rebellion. The totalitarian government keeps the subjected populations in line by threatened devastation, starvation, and brutality.

The horrific rite at the heart of this culture is an annual event — somewhere between a sport and a sacrifice — is The Reaping. Two adolescent tributes from each district, one boy and one girl, ages ranging from 12 to 18, are selected. Although it will come as no surprise that the opening brings to mind Shirley Jackson’s “The Lottery,” the plot veers quickly in another direction. The tributes are taken from their home district, and in a contrived Survivor-like reality show, are forced to fight each other to the death. A selective real-time video is played on television. And in an interesting twist, watching The Hunger Games is mandatory.

Our heroine and narrator is Katniss Evergreen, a practical, level-headed teen and the sole support of her mother and younger sister. Her father having died in a mine explosion (the family lives in a coal-mining district with an Appalachian feel, called the Seam), without Katniss’s ability to sneak into the forbidden forest to poach, her family would starve. We join her the day of the drawing. The odds are definitely not in her favor — because of age and poverty, her name is entered many more times than average, and the same is true of her hunting companion, Gale. Katniss barely registers that her 12-year-old sister’s name had been called when she dashes to the stage and volunteers to replace her. The second tribute from her district is Peeta, the baker’s son.

The 24 teens are then sequestered in the Capitol, where a team of stylists — and here is one aspect of how the author uses our familiarity with television shows like Survivor to recast a venerable science-fiction scenario — is assigned to primp and prepare them for the Hunger Games. The more attractive and personable participants have better the odds of obtaining a sponsor. A wealthy sponsor can provide expensive gifts of food and medicine during the games that could mean the difference between life and death. District Twelve’s prep team creates an illusion of romance between Katnis and Peeta to garner sympathy and perhaps support for these players.

Not that Katniss and Peeta think they have a chance. It has been more than 30 years since a winner came from District Twelve. Many of the other combatants are from the richer districts. These Career Tributes have been training their whole lives for this moment. They are healthy, well fed, and aggressive: one of them always wins.

Part of the drama involves watching Katniss and Peeta’s responses as they are torn from a simple life of surviving in a harsh, oppressive existence and dropped into a technologically sophisticated environment. We luxuriate along with them as they experience an abundance of food and sumptuous clothing, as well as having all of their physical needs met. But there are constant reminders of the dark underside of these moments of pleasure. Not the least is a servant whose tongue was removed as a punishment for running away. Katniss recalls for us of the power of the Government to genetically engineer predators for their own amusement. Readers aren’t allowed to forget that the end of this journey is a violent and spectacular death, broadcast to the nation.

Collins is a skillful storyteller who makes this nightmare vision a convincing one. Well-drawn characters range from the insensitive, relentlessly cheerful government representative, Effie Trinket (who resents being assigned to such a hopelessly low-profile district) to Haymitch, the last winner from their district, who — despite his continuous inebriation — may become a resourceful and effective mentor. Given the high stakes, Katniss’s single-minded focus on survival and predicting the others’ strategy, to the disregard of nearly all else, is believable. The plotting is tight, and Collins throws readers with plenty of small details that complicate the scenario and build suspense. Is there a secret rebellion amongst the citizens of the Capitol? What is the secret talent that gave tiny Rue such a high score? Will Peeta, who has no skill for either hunting or fighting, be even able to survive the first day? Is this an act or does he really love Katniss?

One of the most pleasurable aspects of the book is the treatment of the contrasting Districts and their struggles. When Katniss finds an unlikely ally in slight birdlike Rue, we find out that even in the agricultural districts the farmers are starving, a faint echo of the Irish Famine. The behavior of the oppressed may remind readers of the occupants of the Warsaw or Lodz Ghettos, with the internal hierarchy of governing class that collaborated with the oppressors to maintain order. Other elements of the society bring to mind the former Soviet Union’s domination of satellite states. No one will miss the similarity of the inhabitants of the Capitol to some present-day citizens of the United States, who combine an obsession for entertainment and celebrities with a blindness toward those who are suffering.

Are these topics for seventh graders? Twelve-year-olds are certainly familiar with these themes. In the microcosm on the classroom, children experience cruelty and deprivation, some just trying to survive to adulthood. Behind closed doors some are abused, and small kindnesses take on disproportionate meaning. Survival sometimes depends on letting others help. A good classroom culture emphasizes the need in a strong community for compassionate members who care for the weakest. Young readers will be able divine a deeper meaning from what on the surface might seem to be the depiction of a violent reality-television show.

Does Suzanne Collins try to pack too much into this dystopic society? Probably, but this ambitious novel, threaded with romantic tension, cliffhanging uncertainty, and an engrossing vision of a possible tomorrow is likely to keep readers riveted.

Lisa Von Drasek is the children's Librarian at the Bank Street College of Education. Her reviews and commentary have appeared in School Library Journal, The New York Times, Kirkus Reviews, The Bark, Knowledge Quest, Teaching K-8, Nick Jr., and more.