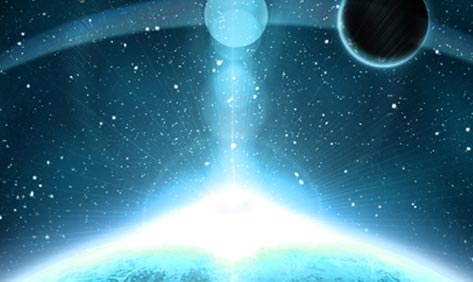 As with traditional geopolitical history, much of the more recent history of the science fiction field remains entangled, buried, and uncodified, in flux: its living proximity to the turbulent present hinders any coolly rational analysis or clinical perspective. And from another angle, recent events seem, well, somehow less prestigiously historical than older ones, less worthy of scholarship.

But surely, one might think, the 1980s roots of that popular mode, the New Space Opera, an era now thirty years past, would be already cast into a consensus narrative. Not really. The still active authors of that period are too busy producing fresh work for the marketplace to look backwards overmuch, and eminent critics such as Gary K. Wolfe are just getting round to truly sorting out the 1950s.

The closest thing to a definitive textbook of the New Space Opera remains the anthology from 2006 assembled by David Hartwell and Kathryn Cramer, The Space Opera Renaissance. Yet even here the editors’ ten-page introduction, which launches its survey back in the 1940s, takes until just six paragraphs from its conclusion even to reach the 1980s.

The New Space Opera, Volume 1, edited by Gardner Dozois and Jonathan Strahan, a compendium of newly commissioned work from 2007, features a five page introduction that manages to hit the 1980s after the first three pages, thus doing a little better proportionately. The sequel from 2009 by the same editors, The New Space Opera, Volume 2, features a more perfunctory introduction which admits: “Our intention with compiling The New Space Opera was not to assemble a movement-defining book — a task that still remains to be done in our opinion — but to map at least some of the territory…”

Certainly, despite any canon-declining limitations, all three of these volumes offer a good place to begin enjoying the New Space Opera, whose genesis author Paul McAuley, long a part of the phenomenon, recently characterized succinctly in this manner:

“[W]hen the whole ‘Radical Hard SF’ and ‘New Space Opera’ thing was kicking off, I was part of a bunch of writers who, along with Interzone editor David Pringle, felt something similar. If you were going to reuse the old tropes, we thought back then, you shouldn’t take them at face value. You should strip out their guts and rebuild them from the ground up. You should weld in the new biology, the new physics, the new cosmology. Punk it up.”

One thing that all these experts agree on is that, since the publication in 1987 of his first Culture novel, Consider Phlebas, Iain M. Banks has been an integral founder and exponent of this mode, seminal in all respects. So a look at The Hydrogen Sonata, his latest offering in this vein (Banks writes many other types of fiction as well), should prove entertaining and illuminating, revealing many things about state-of-the-art space opera and its inclination to shake up and rearrange accepted tropes.

The first aspect of Banks’ future to contemplate is its scale and colorful heterogeneity. Not without good reason did Brian Aldiss dub the space opera format “widescreen baroque.” And in fact this kind of unfettered, wonder-filled, expansive milieu with many outré protagonists is one of the prime attractions of space opera, new or old.

According to Banks, our galaxy, over ten thousand years from now, will be dominated by the Culture, a multi-species, “post-scarcity” civilization, many of whose technologies tend, in a Clarkean sense, to be indistinguishable from magic. Although to give Banks full credit, his tone and affect always affirm a rationalist, technological paradigm.

Outside the nearly omnipotent Culture lie myriad lesser intelligent species and associations, endowing the landscape with additional exotic worlds and worldviews. Finally, just to make things even more complicated, we get two layers of existence: the Real and the Sublime, the latter being an ineffable dimension where singularity-type existence takes place. Banks bops among his chosen Real venues — some essential, some throwaway; some natural, some artificial — with great élan and zip, ensuring that the reader is kept in continual suspense, and also conveying a subliminal sense of dizzying simultaneity across a broad canvas.

What’s the MacGuffin that spins the plot across so many milieus and preoccupies a disparate set of aliens, humans, and artificial intelligences (the Ship Minds) so intensely? One species, the Gzilt, are about to Sublime. That is, they are making a migration en masse into the intangible heavenly dimension where so many others have previously transcended. But what is supposed to be an orderly, well-defined procedure, long established by custom and protocol, is in danger of going pear-shaped. The Gzilt holy text that has motivated all their actions for millennia is deliberately exposed as a hoax. Factions of the Gzilt — a militarily inclined race — are now fighting among themselves. And the designated Gzilt heirs remaining behind in the Real are squabbling.

Into this mess are injected several concerned parties, facilitators, investigators, and kibitzers. Vyr Cossont, four-armed musician, member of the Gzilt civilization, is nervously awaiting Sublimation when she is tapped by the authorities to seek out a man she knew long ago, Ngaroe QiRia, supposedly the galaxy’s only immortal, born before the Culture even existed. He might very well have some answers to many important questions. Then there’s Septame Banstegeyn, hedonistic Gzilt politician, tasked with making the Sublimation go smoothly. Aloof and droll Ship Mind Mistake Not… — these space-going superior intelligences are free agents — is persuaded by his fellow Ships that the whole debacle merits his intervention, to the point of hosting Cossont and aiding her materially. And so forth and so on, across a dozen different factions with competing or parallel interests and goals. Banks’ prolific sense of invention and plotting keep several dozen plates spinning simultaneously and entertainingly.

What salient traits can we extract from The Hydrogen Sonata that might apply to New Space Opera in general?

First comes a kind of postmodern aversion to reductionist methods of government, of thinking, of living, of interpersonal relationships. The multiplicity of lifestyles, of societal systems, of fleshly incarnations (changed as easily as clothing) bespeaks a desire for maximum freedom of thought and society. Gone are the empires and federations and faux royalty of old-school space opera. In their place is something more complex, derived from our own confusing multicultural landscape. Bits and pieces of this approach date back as far as Samuel Delany’s Empire Star (1966), an ancestor of the New Space Opera not cited often enough, and Cordwainer Smith’s tales of the Instrumentality, appearing about the same period. This antagonism to centrality or unipolar schema extends even to Banks’ entire Culture canon, whose individual components all detail independent adventures: intertwined, but without any obvious overarching meta-narrative or arc.

Next we sense a desire to replicate a kind of saturated environment of ideas. We live in an age of information overload, and Banks fully expects the ideational landscape of the future to be even more overwhelming. He drops new ideas and artifacts, new gadgets and ways of being on nearly every page. One minute we’re witnessing an artist who works with hand-polished sand grains, and the next we’re watching QiRia meditate to a cataract of sound, having replaced his eyes with extra ears. It’s an endless fire hose of information we can only sip from.

But what is most important in Banks’ oeuvre, I think, is a kind of baggy-pants discursiveness, a playfulness and lightheartedness at odds with dystopian and near-future SF. His chosen mode of speculative fiction automatically presumes that intelligence has survived all our familiar 21st-century crises, and has in fact expanded across the galaxy and flourished. Consequently, author and characters find themselves adopting a more sanguine perspective. We become like QiRia, who maintains quasi-cynically that the main reason he has embraced to justify staying alive so long is simply the joy of witnessing the grand ability of intelligence to screw up royally, then survive and move on from its catastrophes. Banks conveys this sense of realistic cockeyed optimism with many absurdist and surreal japes and conceits. At times, he’s more P. G. Wodehouse than Isaac Asimov.

Certainly the central, almost allegorical motif along these lines is “The Hydrogen Sonata” itself. It’s a musical composition which Vyr Cossont is trying to master on her strange instrument, the Antagonistic Undecagonstring. (The bulky, awkward instrument always manages to stay amusingly by her side, despite numerous shipwrecks and assaults and hard traveling, even though she’d half-like to ditch it.) The composer of the “Sonata,” Vilabier, originally wrote the piece as a joke, to illustrate the heights or depths of the kind of soulless, abstract musical composition he detested. Then it became a classic, accepted at face value, his only legacy to the ages. By giving his novel this same name, Banks seems to be saying that the accidental, parodic, or unintentional efforts that a person — or a civilization — makes might very well become what that person or civilization (or author) is best known for. It’s cosmic irony at the highest level, and Banks’ novel is like some theophanic thunderbolt from the Sublime, arriving to deliver the zap of enlightenment while knocking us off our boring shelf of complacency and certainty.