What makes a collection of stories more than simply an arbitrary arrangement of short fiction written over a certain period of time? There’s an art to putting a collection together; much as a good album is as much about building a mood as it is about the songs themselves, the best collections provide a context for the stories that they contain, deepening the reader’s interactions with each one. Whether they share a central character or create a brand-new world with each installment, short story collections can offer a kaleidoscopic take on a single subject. Some showcase the evolution of a particular character over some of his or her life; others showcase different vignettes from around a particular region. Others feel like different meditations on the same theme, running certain ideas through a number of permutations.

In Arthur Bradford’s Turtleface and Beyond, it’s the bleakly comic misadventures of one man, which involve everything from encounters with snakebitten lawyers to misadventures with prosthetic limbs–a kind of slapstick take on Denis Johnson’s Jesus’ Son. Nathan Poole’s Father Brother Keeper is a starker work, with its stories set largely in the southeastern United States, focusing on familial legacies that can veer into violence. Thomas Pierce’s Hall of Small Mammals is more varied: some of its stories are set in a hyper-accentuated reality, while others center around their characters’ shifting emotional states. Taken together, these books offer well-crafted stories and a good reminder of how to assemble a collection. Focused and thematically resonant, there’s plenty in these three books to argue for the strength of the collection as a form. 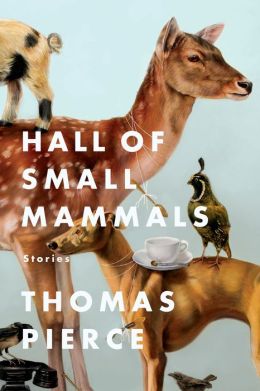 Hall of Small Mammals begins with a story centered around a small mammal: specifically, a dwarf mammoth that’s been cloned by a scientist named Tommy for a television show. Circumstances force Tommy to leave the mammoth with his mother, Mawmaw, who proves herself to be unexpectedly skilled at keeping a prehistoric creature hidden from public view. Science (and public interest in it) runs through the collection, along with complex familial dynamics and an occasionally insider-y look at the entertainment industry. The presence of the cloned mammoth is an indicator from the start that Pierce isn’t necessarily confining himself to straightforward realism.

That elision of reality is useful to consider in “The Real Alan Gass,” in which the protagonist Walker’s girlfriend Claire begins to have a series of dreams in which she’s happily married to a man named (as you might guess from the title) Alan Gass. Pierce enumerates why this is problematic: “Alan Gass is a ghost, and Walker knows you cannot fight ghosts. They are insidious.” Still, this doesn’t stop Walker from seeking out men who share the name of Claire’s dreamt paramour; that this is juxtaposed with Claire’s research in theoretical physics adds to the questions of possibility and reality that run throughout the story. Pierce’s fiction is at its best when it’s at its most mysterious: “More Soon,” another highlight, is centered around a man named Bert, whose deceased brother’s body has begun to exhibit some ominous, plague-like properties. It’s both absurd and terrifying, with elements of the apocalyptic and the satirical converging, while the brothers’ sometimes-strained relationship is revisited. 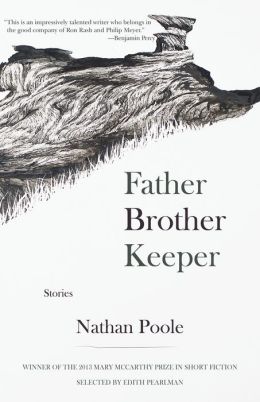 As the title Father Brother Keeper might suggest, families play a large part in the stories contained in Poole’s collection, with an emphasis on men. Paradoxically, it’s the title story–which closes the book–which expands the scope somewhat, bringing questions of gender and race most prominently into the forefront. Many of these stories are set in the Southeast; many involve the interplay between generations. Jimmy, the protagonist of “Fallow Dog,” is left to settle his grandfather’s estate. On the property, he discovers a series of large oil drums–which, it transpires, are not empty.

From inside them came a sound like a recording being played, throated and hollow, the whimper and bay of anxious dogs. He stared at the drums for some time and tried to make sense of it but could not.

The sinuous sentences quoted above are representative of Poole’s approach here: the stories that he tells are full of stark moments, but the style in which he tells them is less terse than expansive. His prose is full of winding passages, sometimes encompassing past and present; the sentence that closes “The Firelighter” sweeps through a series of actions, draws in the protagonist’s family’s history, and closes on a magnificent and contradictory image; it’s a bravura finale. 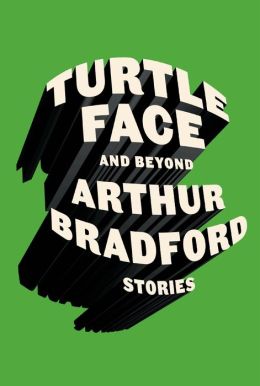 The stories in Arthur Bradford’s Turtleface and Beyond take on a far more lighthearted tone, even though the imagery in them sometimes rivals that in Poole’s stories for bleakness. At the center of the title story is a diving accident that leaves one character with a face compared to “an unsettling tableau not unlike one of those big rubber masks you sometimes see kids wearing on Halloween.” That’s due to a collision with a turtle’s shell; the wounded turtle is taken in by Georgie, a friend of the injured man and the narrator of this collection’s dozen stories. Later in the book, Georgie will attempt to save the life of a lawyer suffering the effects of a snakebite; he will date a woman with a prosthetic arm and attempt to reconnect with her after a horrific accident; there will be auto accidents and tense encounters with cocaine dealers, and a man who loses his rear to frostbite.

The experience of reading Turtleface and Beyond is like a barroom conversation with a stranger who tells you about odd episodes from their life. “The Box” and “Lost Limbs” fit together neatly, and are pitched at the same sometimes-surreal level of comedy, but the chronology of these stories is loose, the progression non-linear. “At that moment I wished I possessed Otto’s imagination and daring,” Georgie muses early in the book, before that daring imagination leads to Otto’s substantial injury. By some of the later stories, such as “Build It Up, Knock It Down” and “217-Pound Dog,” Georgie grows more confident, and more aware that certain courses of action might not turn out well. It doesn’t necessarily keep him out of trouble, but he’s at least aware of the danger that exists.

Each of these collections has much to offer. Poole’s is the steadiest, but has the narrowest focus. Bradford’s was arguably the most entertaining, while Pierce’s showed off the widest range, even as some of its stylistic risks don’t entirely click. For readers looking for a primer in what can come from a solid collection, any of these three will offer abundant rewards.

The B&N Podcast: Charlie Mackesy on our Book of the Year
Previous Previous Post: Leaving Before the Rains Come
Next Post: Today's Specials Next