The subtitle of anthropologist Brian Fagan’s The Intimate Bond — How Animals Shaped Human History — may be brief, but the perspective it announces is headily refreshing. Usually we give ourselves credit for initiating everything.

Instead, after auditing a breadth of archaeological research, the author finds evidence for his revolutionary thesis: that we were as fundamentally changed by various domestication/subjugation/partnership relationships with six animal types — wolves who became dogs; aurochs who became cattle; pigs, sheep, and goats; donkeys; horses; and camels — as were the animals themselves. Unfortunately for them, and this Fagan summarizes in the book’s coda on animal welfare, the changes rarely spelled benefit. Pretty much, it was death. Most often, death preceded by suffering.

This inclusiveness is unusual (if high time) for the field; after all, anthropology is by definition concerned with anthropos. Yet one of the most rapidly expanding disciplines in scholarship is human-animal relations. The Intimate Bond adds another to a handful of recent popularizations in the cousin studies of zooarchaeology and anthrozoology. It digests a vast number of details into its single compact theory that it is animals who made us who we are today — and that modern humanity’s Big Bang was the shift from hunting to domestication of animals. This transformed everything, from economies and the density of communities to warfare and diet, from religious observance and life expectancy to invention and art, from trade to self-conception. All because we figured out how to tame some beasts.

People who relied on hunting naturally perceived wild animals in a far different, more deferential light than those who captured and considered them personal assets: hunters experienced “close kinship and partnership” with their quarry that bordered on worship. Those haunting brick-red handprints (in ocher mixed with blood) stamped onto prehistoric rock-wall paintings of prey were meant to transfer the power of the depicted animal back into the body of the human who killed it — and who could only pray for the luck to do so again. “It is almost as if they were in love with their prey,” Fagan writes, pointing to the power that, well, power has on our imaginative conception of the survival equation. Domestication marked a radical turning point that caused humans to perceive themselves as apart from — indeed, above — a unitary ecosystem, the one in which our species had evolved on equal ground with all others. The novel relationship to animals that is possession changed our appreciation of them from mysterious beings “treated with respect, as individuals” to “impersonal commodities.” Now they were a source of “wealth on the hoof.” And alongside this shift came another: as culture developed materially, it went backward morally. Here is a heavy account of our grievous treatment of these “commodities” whose selfhood is denied by the act of ownership.

Other less stomach-churning but still astounding facts abound in The Intimate Bond‘s description of the fully entwined history we share with our animal brethren. Take cattle. Domestication took 2,000 years, beginning with only eighty individuals 8,000 years before Julius Caesar. It may also have required three separate tries. The third was apparently the charm: cattle are to us today the most important livestock in the world (1.3 billion in hand, outnumbered only by chickens). They were decisive, too, in ancient Greece, with thousands ritually sacrificed in Athens alone each year. 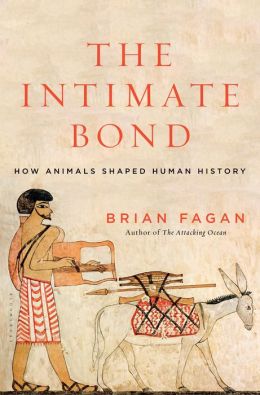 The curious case of the wolf, however, comes first, functioning as a bridge between the earliest partnership model and that of farming’s ownership. The predator who became man’s best friend stands alone among animals, and not only because in his fiercer proclivities he is more like us than the quiet vegetarians who became our vassals. Fagan cites recent research that has uncovered a phenomenon unique to this special relationship with our canid fellow traveler: co-domestication. It turns out they tamed us as much as we tamed them. Nor has either species fully escaped a shared battlesome tendency, since dogs remain genetically near-identical to their wild progenitors, and although we love them we have waged on their relatives a continuous war of annihilation. Complete eradication of the wolf was accomplished in England by 1500, in most of Europe by 1750, and in the American West by 1900.

We leveled the same duplicitous gaze at the horse. Simultaneously, and to this day, he has been food source, battle engine, beast of burden, status symbol, sporting equipment, and dear friend. These and the other animals we harnessed figuratively and literally to our needs, Fagan allows, changed history again and again.

When drought on the plains coincided with unrest and brilliant generalship by the likes of Genghis Khan, the foundations of history shook — all because, thousands of years in the past, some bold young men dared jump on the back of recently tamed horses and ride them.

Of such, then, is culture made: the accidental collision of opportunity and ingenuity, chance and environment. The archaeological record is a puzzle picturing a puzzle.

Animals may have made us what we are, but we also made them what they are — subservient, and suffering. By calling attention to how this came to be, Brian Fagan helps envision another possible evolution: what we have made we can also unmake. Only if we persist in believing animals are our creation, and not the other way around, can we continue the current practice of “selective benevolence.” It permits us to avoid confronting the essential injustice of loving some and injuring others, sometimes one and the same kind of animal, through the simple act of calling one food and the other pet.

Perhaps not for much longer, if the enterprise of books like The Intimate Bond becomes prevalent. “The fact is that we do not want to know the truth about the victims of [our ill] treatment, partly because we don’t want it to weigh on our consciences,” Fagan concludes. That truth may be largely buried still, but archaeologists will continue to dig it up and anthropologists to interpret its meaning. Between covers, stark before the eyes, the truth becomes harder to adjure. The previously voiceless begin to speak.