The Invention of News 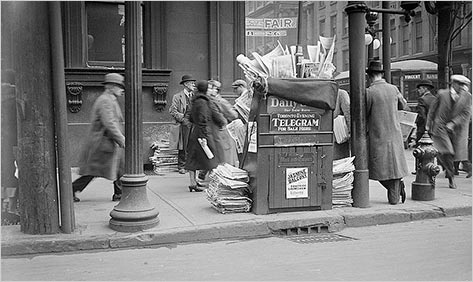 For a long time, it was possible to think of “the news” as synonymous with “the newspaper.” Starting in the mid-nineteenth century, mass-circulation daily papers became an integral part of the way millions of people understood themselves and their world. The conventions of such papers — headlines and columns, the way stories are arranged on the page, the division between news pieces and editorials — came to seem so natural that it was hard to imagine the news without them. But in the last twenty years, as hundreds of papers have folded and the rest migrated onto the Web, it has become clear that the newspaper was just one phase in the long history of the news. Its future may look more like Vox or Five Thirty Eight, or for that matter like Twitter, than like The New York Times.

Our emerging post-newspaper era, the historian Andrew Pettegree believes, makes it easier for us to understand the pre-newspaper era. “Living as we now do through the uncertainties of the evolving and unstable multimedia world that characterizes the early twenty-first century,” he writes at the end of his magisterial The Invention of News, “it is perhaps easier to see why a similar variety of news delivery would have seemed utterly appropriate to the four centuries” that are subject of his book, the years 1400 to 1800. During that long period, Pettegree shows in striking detail, Europeans — and the focus of his book is Western Europe, with a sidelight on the American colonies — developed a large appetite for news. But they satisfied that appetite in a variety of ways, of which actual newspapers were just one, and for a long time one of the least important.

When you think about it, in fact, there is something rather strange about the idea of learning about the world by reading a newspaper. Why, exactly, do we need to know about minor tragedies in far-off lands? What difference does it make to your life if protestors in Egypt are sent to prison or the pecan harvest in New Mexico fails — not to mention if Gwyneth Paltrow gets divorced? And why do we trust this piece of paper covered with words, when we don’t know anything about the people who wrote it? How do we know that journalists are telling us the truth?

What Pettegree shows, thanks to his command of a huge range of sources in several languages, is that the human appetite for news is eternal. Even in the year 1400, people clamored to know about outstanding or unusual events: murders, supernatural apparitions, battles, the marriages and deaths of kings. These are the same kinds of things that we read about in our tabloids, so it is no surprise that in the early age of print, such topics filled the news sheets — one-off publications designed to capture public interest. It wasn’t even necessary for an event to be recent for a printer to turn it into a bestselling pamphlet: “it was not unusual for news pamphlets to be republished years, even decades after the events they described.” Such publications could be sold quickly and didn’t cost much to produce, making them a favorite of printers, who often had trouble moving copies of bulky books like the Bible.

News sheets in the sixteenth century were occasional works, announcing major developments like Columbus’s arrival in America — his letter to Ferdinand and Isabella describing his voyages was quickly turned into a Latin pamphlet reprinted across the continent. Pettegree shows that the appetite for such publications increased drastically in the Reformation, which for the first time enlisted a large reading public in political and theological debates. Martin Luther’s own pamphlets, or Flugschriften, adopted a distinctive cover design, which “served as a visual marker that would identify Luther’s publications on a bookseller’s stall.”

According to Pettegree, the first European “news event,” followed in something like real time by readers in many countries, was the Battle of Lepanto in 1571. This naval victory by Christian Spain over Muslim Turkey caused rejoicing in Protestant and Catholic Europe alike: the news spread from Venice to France to Germany to England within a few weeks. Equally newsworthy, though much more divisive, were the St. Bartholomew’s Day Massacre of French Protestants, in 1572, and the defeat of the Spanish Armada, in 1588. These events showed how the news remained dependent on private reports from eyewitnesses, which could be unreliable. The key English victory took place on August 7th of that year, but as late as the 26th, the Spanish king Philip printed a broadsheet announcing that Spain had triumphed. One of the key themes of The Invention of News is that the news industry developed in tandem with European politics: war and religious controversy were the engines that spurred printers and journalists to innovate.

Clearly, reliable news was a rare commodity, which made it an expensive one. The earliest origins of the modern newspaper, Pettegree finds, are in the private, subscription-only newsletters that kept princes and rich merchants in the know about commercial and political developments. These avvisi — as they were known in Italy, where they first flourished — were little more than summaries of reports received by mail and word-of-mouth from various foreign cities. When the first printed newspapers began, in Germany in the early seventeenth century, they kept this dry and often baffling style, making them hard to read and restricting them to an elite, informed audience. The very first European newspaper, the Strasbourg Relation, which began publishing in 1605, did not look much like what we consider a newspaper today: “There were no headlines and no illustrations. There was little exposition or explanation and none of the passionate advocacy or debate that characterized news pamphlets; indeed, there was little editorial comment of any sort.”

As Pettegree continues his story into the seventeenth and eighteenth centuries, the forms of the newspaper and the pamphlet start to merge. We see the advent of one-man essayistic journals like The Spectator, of learned journals that brought the latest scientific discoveries to a general audience, and of government propaganda papers that advanced a party line under the guise of reporting the news. By the time of the American and French Revolutions, the press was so integral to politics that the First Amendment declared protection for press freedom — something that would have been incomprehensible a few centuries earlier.

But throughout this story, with all its fascinating byways and eccentric figures, Pettegree emphasizes that the printed news was always just one of the ways people found out what was going on in the world. He writes about the postal service of the Habsburg Empire, which linked distant European cities for the first time by regular mail deliveries; about church sermons and royal proclamations, which kept many people, including the illiterate, informed about current events; and about coffeehouses, which emerged in the late seventeenth century as hotbeds of news and gossip. Indeed, for most of the period Pettegree discusses, word-of-mouth remained more important than print, and the well connected knew more about the news more quickly than the average reader of newspapers or pamphlets. Today, with many people finding out instantly about world events from eyewitnesses on the Internet, we may be returning to this word-of-mouth model, with all the problems of trustworthiness that it raises. The Invention of News is an outstanding introduction to the past that also helps us understand our future.

Previous Previous Post: Fiction's Grand Illusionist: An Interview with Christopher Priest
Next Post: The Brunist Day of Wrath Next