The Last Days of Disco 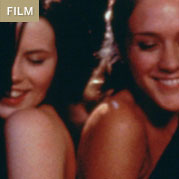 That a movie with a get-happy soundtrack, a toothsome cast, a stockpile of zingers, and a gentle plotline should outfox popular tastesas demonstrated by its modest box office returns seems counterintuitive. Or it does until one notices that, ahem, what we have here is a Whit Stillman picture. As a chronicler of the privileged set, Stillman is wonderful at creating lightly satirical movies of a literary temperament that are absorbed in the group dynamics of young people. His movies are aimed at savvy viewers who delectate in power struggles that are gift-wrapped in up-tempo conversations. Unlike Woody Allen, with whom he is inveterately compared, Stillman doesnt cast his movies with a lovable schlemiel, à la the type of character Allen usually plays, or an upstart who manages to gain entrée into posh social playgrounds. As such, this writer-director’s movies drip exclusivity. All of the leading male characters in The Last Days of Disco (1999) are former Ivy Leaguers. And the two club-dwelling recent college grads (played by Chloë Sevigny and Kate Beckinsale) live on the Upper East Side while holding down low-paying, albeit cool jobs in publishing. (Naturally, their parents help them out.) Unlike Stillman’s debut feature, Metropolitan (1990), which peered at New York debutante society, this mostly un-kitschy love letter to early-’80s New York nightlife contains a few intrusions from outside of the bubble, i.e., an assault outside of a discothèque perpetuated by a pair of class-conscious punks, and archival footage (anachronistically presented) of the great conflagration of disco records carried out at Chicago’s Comiskey Park on July 12, 1979. Out of the flames of populist resentment, this phoenix stirs.