The Last Unicorn: A Search for One of Earth’s Rarest Creatures

CODE RED SPOILER ALERT: The Last of the Unicorns is not about unicorns. It is about saolas. There is a connection: the reason you have never heard of saolas is because they are about as numerous as unicorns. But they’re not quite gone, not yet. As the unicorn is a handy symbol — of beguiled lovers, or the passion of Christ, or purity, healing, and the ungraspable — for naturalist/explorer William deBuys, the saola and the unicorn share the unbeatable combination of enigma and beauty, though also the prospect of being pure absence, as incorporeal as smoke.

Some basics: The saola is a bovid, a grazer, a ruminant, along the lines of a goat or a cow. Like the unicorn, its horn is both natty and dangerous (though the saola carries two, pointing straight back from its frontlet), nor is it diminutive — adults stand about three feet tall, stretch to five feet in length, and carry 200 pounds: a cruiserweight — and it is one of the rarest creatures on earth. It lives only in the Annamite Mountains — unless you are from Southeast Asia or engaged in clandestine ops there, you probably haven’t heard of them, either — that straddle the border of Vietnam and Laos. Humid and rugged only begins to describe its habitat (terms to add would include hairy, wicked, ticklish, and hard-ass), but for description we can turn to William deBuys, who has a knack for it, as well as a talent for being pleasingly brutalized by the terrain. An easily won saola is no saola at all.

The saola’s home place may be harsh and remote, but that does not make it safe and secure. “I have a sense of entering a doomed land, like the forest of William Faulkner’s bear,” writes deBuys as he starts his journey to saola land in the company of Lao companions and field biologist William Robichaud. This little slice of the world is hugely diverse in flora and fauna, and Robichaud has been working its precincts for over two decades. The saola has been of particular interest to him since the first Westerner laid eyes on it in 1992. The saola — from the Lao words sao la, “the tapered posts that support a spool for winding thread” — was not just a wonderful new-to-us species, deBuys notes, but a new genus, and very possibly a new tribe. It has no close relatives; “it is a stub off a major limb,” on the tree of life, “and it grows close to the trunk.”  In the world of biology and biodiversity, those are serious potatoes. 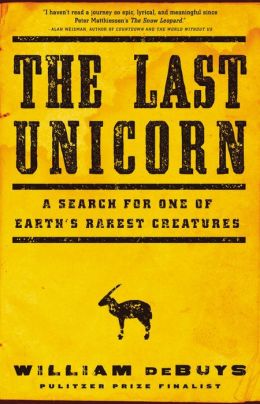 The expedition also wants to see how this area is getting along as a designated wildlife preserve. It is de jure protected and de facto completely vulnerable. No one is willing or able to pony up the funds to properly police the area, and there is much to desire, if you are so disposed, in these hills and plateaus. Poaching, rather than ecotourism, is the area’s principal activity. “The impacts of the Vietnamese are especially damaging, for they are market hunters, harvesting all manner of wildlife, large and small, for sale in Vietnam and China. The demand in those countries for status restaurant foods, including wild meats of all kinds, and for animal-based medicinal treatments is both voracious and insatiable.” Some pangolin to go with your muntjac? As prices rise, the scouring intensifies. The forest floor is beribboned with snares. Gone are the tigers, but here are elephants, forest rhinos (imagine jumping one of them by surprise), clouded leopards, civets, spotted linsang, binturong, slow loris, and Edwards’s pheasant.

The dense woodland is also home to bands of roaming Yellow Leaf People. “In the forests of Laos, nomadic foragers typically roof their temporary shelters with palm or banana leaves, but they rarely stay in one place for long. By the time the leaves turn yellow, they have moved on.” Bureaucracies dislike ungovernable nomads, so the Yellow Leaf People are being forcefully settled. “Translocation is killing them,” bridles Robichaud.

DeBuys gets hot under the collar when he contemplates the damage. “The saola had stepped from the mists of anonymity into the glare of celebrity . . . the celebrity of a glamorous commodity,” writes deBuys. “Like tigers and golden turtles, it offered a path to wealth.” You sense the pencil is about to snap in his fingers. The story needs this headiness, to startle and forewarn, like the exudations of the saola’s musk glands. “These days, the conservation of the world’s most charismatic species, in many places, is won only at the point of a gun.”

In his chronicles of hard travel to distant places, deBuys is more like Redmond O’Hanlon than Bruce Chatwin or Peter Matthiessen. He’s not afraid to mention a sore back or an extreme dislike of one of his traveling companions. He falls in the water a lot. “I lunge for a root, grab it. It breaks. Down I go.” He enjoys venting a little rage in destroying a poacher’s camp or grousing about the leeches and biting insects. This is good and tethering, because when it comes to the saola, the air can get thick quickly: “The creature is extraordinary,” “strangely serene,” and “Buddha-like in its calm.” (Robichaud had once spent two weeks observing a saola in the crude menagerie of a local Grand Poobah, so at least these words are not unadulterated wishful thinking.)

When it comes to drawing the atmosphere of place, deBuys keeps his pencil very sharp. Deep in the jungle: “Competitive roosters start crowing in the wee hours. At first light, competitive boom boxes join them. The racket is constant, the air cool. Puppies seeking a warm place to nap crawl atop a pile of sleeping black pigs. . . . Voices call house to house.” A mineral lick high up the Mulberry River, weaving back and forth across the Ho Chi Minh Trail, a primary pine forest, coming upon a macaque “clubhouse,” these all are right there in the mind’s eye. There is much to be said for “the people who labor in the vineyard of species protection,” many motivations — preserving biodiversity, the prevention of environmental degradation — but when you get down to it, “Robichaud, like many others, says that what gets him out of his sleeping bag in the morning is something different and simpler. It is beauty.”

As for deBuys, he lights up when outdoors and in the moment, being aware of his surroundings but not so much that his jaw aches; when he is unanxious, quelling the “dissent of countervoices” (“I cannot bear another dunking“); when “the smooth mind is purged of distraction and self-consciousness . . . nothing unwanted can snag on it.” Better, though, is when deBuys and a bird share the understory of a bush during a snow squall. “From a branch four feet away, the bird watched me with a cold black eye. I did not recognize the species. It was new — a find! . .  . The bird stared at me and I at it.” Smooth is fine, but this is in the zone. “The bird was so profoundly there, so close and alive.” DeBuys, too. “I had no name and no template for it, and so it was just bird, fresh from creation and marvelous. . . . Never before have I sensed the presence of another creature so strongly, and, I am sorry to say, I rarely have again.”  Sublime — deBuys melting the boundaries with, as it turned out, Robin Redbreast. We should all be so fortunate. That’s a once-in-a-lifetime experience and not to be traded, even for a saola.

Previous Previous Post: Night at the Fiestas
Next Post: Schubert's Winter Journey: Anatomy of an Obsession Next