The Legacy of Charlie Chan 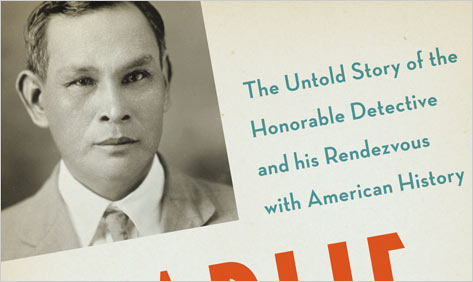 Despite the many strides the past few decades have made toward eliminating ethnic injustice, race is an issue that isn’t going away just yet  — and is, instead, heating up. A black president in conjunction with a crippled economy and a 24/7 news cycle means innocuous comments are blown out of proportion, latent ugly feelings become blatantly manifest in comments sections and public demonstrations alike, and complex examinations are passé  in the face of cartoon-style rhetoric. There are many days when it feels like America hasn’t learned from past mistakes, or can’t admit it’s making them again and again.

Into this volatile mix comes Yunte Huang, an English Professor at UC Santa Barbara. He has spent the past two decades researching one of the most popular and troubling characters in American culture, a star of books and movies and a reminder of some of the country’s worst anti-immigration sentiments and practices. Can this character be as Huang writes in Charlie Chan: The Untold Story of the Honorable Detective and his Rendezvous with American History, “a funny, beloved, albeit somewhat inscrutable…character who talks wisely and acts even more wisely” while also “a pernicious example of a racist stereotype”? Can he truly carry “both the stigma of racial parody and the stimulus of creative imitation?”

The answer, of course, is yes, because the character in question is Charlie Chan, born of a primordial stew of culture and politics that includes a legendary Chinese-Hawaiian police detective, a Harvard-educated novelist, a journeyman Swedish actor, argumentative critics and millions of Americans looking for fleeting entertainment. Naturally this is a tricky maze of contexts to navigate, but in choosing to assemble a psycho-biography of Charlie Chan, Huang had to merge these disparate strands into a cohesive narrative whole. The end result is not merely successful, but a revelation: you’re never going to think the same way again about the wise detective’s broken English aphorisms like “An idle brain is the devil’s workshop” or  “Biggest mistakes in history made by people who didn’t think.”

Before Charlie Chan’s birth, in a series of six wildly successful novels written and published by Earl Derr Biggers in the 1920s, there was Chang Apana, who joined the Honolulu Police in 1898, mere days after Hawaii was annexed as a U.S. territory. Apana’s rise up the ranks to detective seems improbable in hindsight: he was slight, he hardly spoke English, he didn’t drink, and he was Chinese at a time when anti-immigration sentiments and laws specifically targeted his brethren. But Apana’s rise to police prominence grew out of these so-called disadvantages, which in tandem with “his skill at disguise and his insider’s knowledge off Chinatown” made him indispensable to his colleagues – not to mention a prominent fixture in the island’s news stories.

Apana’s exploits caught the attention of Earl Derr Biggers, a writer of upper-middle-class breeding (though he didn’t really like Harvard very much) vacationing in Hawaii for health reasons and looking for inspiration. Apana delivered in spades, transforming a rather typical detective novel of its time, with an emphasis on family secrets and stolen jewelry, into something quite different. The portly, thoughtful Charlie Chan is a minor character in The House Without a Key (1925) but he has the gravitas and scenery-chewing presence of Sidney Greenstreet in Casablanca (or almost any other movie.)

Biggers and Apana wouldn’t meet until 1928, when the Chan books were deep into their publishing phenomenon phase, and the common assumption of Apana’s direct influence upon Charlie is tempered by Huang’s discovery that an actual Charlie Chan lived and operated a laundry in Akron, Ohio, Biggers’ hometown. But by Huang’s account (and the grainy accompanying photo) of the Biggers/Apana confab, it was equal parts friendly visit and cultural symbol: here was the white man making money off of cultural appropriation, and here was the Chinese detective who enjoyed his fame but never earned much lucre (he remained at a $50 a month salary all his life, even with three wives and many children to feed, and turned down Biggers’ efforts to supplement that paltry income.) Once muse and creator met, fate had greater plans: both men would be dead five years later, within months of each other, and Charlie Chan would graduate to cultural phenomenon thanks to the dozens of movies, first featuring Swedish character actor Werner Oland.

Seen from our vantage point, such transcendence of the original works seems inevitable. Biggers’ detective novels are competently constructed, but the plots are forgettable and Chan’s personality lingers as the sole literary aftertaste. Oland tries to make something of the character in the early films, but they don’t hold up, and subsequent movies with others cast as Chan are even worse.  Understandably, Huang spends more time parsing Chan’s place in history instead of critically evaluating the works, which creates a strange paradox of believing in the critique more than the source work.

But that paradox doesn’t defeat Huang’s thesis because he has so many rich sources of inquiry to explore with respect to Charlie Chan’s cultural legacy. Huang argues that Chan’s success stemmed from a Jazz Age-era need to create cuddly stereotypes in the face of ugly legislation like the Johnson-Reed Act, which pointedly disallowed Asians from immigrating. But that’s just the starting point for other information-packed side trips, such as the history of unpaid Chinese labor in America, the story of a notorious rape case in Hawaii that was Clarence Darrow’s final (and unsuccessful) case, a look at how the dastardly (and racially offensive) character of Fu Manchu complimented and corrupted perceptions of Charlie Chan, and the the fury of contemporary cultural critics such as Frank Chin and Jessica Hagedorn, the latter declaring with the title of a well-reviewed anthology that “Charlie Chan is dead.”

Where Charlie Chan falls somewhat flat is when Huang injects himself into the narrative. His intentions are understandable, tied in with his own history as an émigré to American soil in the early 1990s; and his travelogue-like descriptions of the Midwestern plains of Ohio and his search for Chang Apana’s grave in Hawaii convey the requisite mix of whimsy and insight.  But Huang can’t quite commit to investing more of his personality into the book, as if he couldn’t trust his entire self to the reader but knew he couldn’t only rely on polished anecdotes and cogent analysis.

But Huang succeeds in revealing the complexity underpinning the stereotype, and the many divergent factors that led to the creation of Charlie Chan and where he sits, however uncomfortably, within American popular culture. For this country excels at creating characters “rooted in the toxic soil of racism” even though “racism has made their tongues only sharper, their art more lethally potent.” And as insulting and sobering as this thought is, Huang says throughout his book, Charlie Chan and others like him have blossomed “in spite of as well as because of racism.” Wrapping one’s mind around such truths is enough to test the wisdom of even a fictional sage.