The Lost Books of the Odyssey 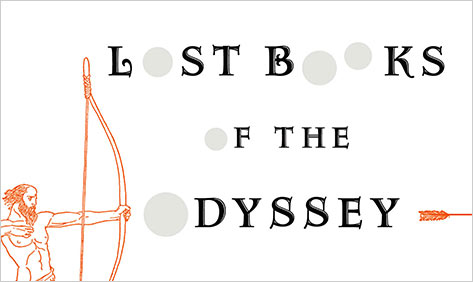 By the third page of Zachary Mason’s stunning debut novel, which purports to recuperate lost versions of the Odyssey, we already know that we’re sailing in unfamiliar terrain. Odysseus has arrived back in Ithaca, but he’s met a Penelope who has already married someone else. The prince looks around sadly.

Then mercifully, revelation comes. He realizes that this is not Penelope. This is not his hall. This is not Ithaca—what he sees before him is a vengeful illusion, the deception of some malevolent god. The real Ithaca is elsewhere, somewhere on the sea-roads, hidden. Giddy, Odysseus turns and flees the tormenting shadows.

Wait! Would the real Ithaca please stand up? Nope, says Mason. In his book, the “real Ithaca” is always somewhere else. It keeps shifting. So do all the characters around it. Mason proposes a swirling, recursive   mosaic of the Odyssey, based on the idea that the tale we think of as a set serious of established episodes  was created in variants, many of which were never united by Homer. And the author – or rather, a mischievous voice which appears now and then in pseudo-scholarly notes   claims to unite a few of the disappeared fragments. The “rediscovered” tales he proposes are wildly inventive: In one, a soldier named Odysseus escapes after the Trojan war  to become a wandering bard, That ex-soldier travels island to island composing poems about a soldier called Odysseus. In another, Paris is also a name for the king of the dead, and Menelaus’s attack on Troy is really an attack on the kingdom of death. In another, Odysseus goes down to the underworld to find Penelope, but she no longer recognizes him, and sees only a person named “No Man.” Using familiar elements as recombinant puzzle parts, Mason, like some fabulist Penelope, enters and then re-weaves the old tales.

Like Penelope, Mason also crafts an unfinishable tapestry. This, Mason seems to argue, is the point: Because the tale lives on in our culture, it remains receptive to our re-making. Therefore, Mason remakes and remakes. In fragments with titles like “The Stranger” or “Guest Friend,” Mason renders the familiar strange, giving the stories space to live anew. Decentering the familiar tales has the paradoxical effect of making them feel close, relevant, breathing. Classics often  suffer the double blow of seeming at once dusty and also imbibed to the point of cliché. But in an era when people like to repeat that the story is dead, books are dead, even history itself is dead, it is wonderful to discover a book in which a story is so pulsingly alive.

In fact, Mason’s retellings frequently bypass mere mortal ideas of life and death. In the writerly web he spins, there have always been many Odysseys, extant legends strewn around the world like so many Goldberg variations. Mason’s “recovered” Odysseys are allegories, retellings, dream sequences, and apocryphal voyages. As if designed by Italo Calvino and MC Escher, they’re full of trick tunnels, funhouse distortions. This is at once enchanting and liberating. Too often we live in a world of passive re-telling, making and accepting copies of things whose sources we don’t know,  repeating stories which are blithely unaware that they are copies. In contrast, Mason’s brand of conscious remaking enlightens and nourishes the active storyteller within each of us.

Mason is hardly alone, of course. Retelling is our longest tradition, and in recent years many other writers have taken on the project of remaking Odysseus. Derek Walcott’s epic poem Omeros weaves the Greek pantheon into a humble West Indian Island, depicting Zeus playing with his West African Orisha counterpart Oshun. Christopher Logue’s All Day Permanent Red re-writes battle scenes from the Iliad in stark contemporary language.  Mason’s Odysseys are less literal than Walcott’s, more fabulist than Logue’s.  They are particularly inviting, full of lacunae our imaginations can enter.

Indeed, one of the chief pleasures Mason provides comes in the form of the questions The Lost Books provokes: How would we like to retell the Odyssey? What do we gain by doing it? What does it mean to any of us to retell? Which Odysseys do we want? How does the Odyssey follow us even when we are not aware of it? Here is a question one of Mason’s mysterious characters, a reader who discovers himself to be an Odysseus, asks of the book he finds in a lonely cabin:  “I wonder what the book was meant to tell me?” This is a  question all readers ask: what does it mean to encounter a story? What does it mean to interact with literary (or in fact any) inheritance?

Mason would argue that we readers are necessarily also makers, reconciling the world of books that come down through time to the world we discover ourselves in. l. His book dramatizes this essential intellectual project. In a beautiful story called “Athena in Death” Odysseus asks Athena “to be young again, or at least not old, and to spend eternity making his way from a war indefinitely far in the past to an island indefinitely far in the future.” Mason adds that “he (Odysseus) did not want to know he was a ghost.”  The Lost Books of the Odyssey allows us to recognize how surely that questing Odysseus has gotten his wish.

But what of us, we readers, who wake up in the mortal world asking what the book was meant to tell us?  What does the tale offer? According to Mason, it bestows contradictory multitudes on us.  If Mason becomes a Penelope, weaving and unweaving the tale , this implies not only that Penelope could have been a Homer, but that the tale is always waiting to be remade by any reader. Odysseus told the Cyclops his name was “No Man” and indeed, perhaps the author of the Odyssesy’s lost books is not Mason, or Homer, or Penelope, or even Odysseus. Perhaps it is not even No Man, but any and also all of us.