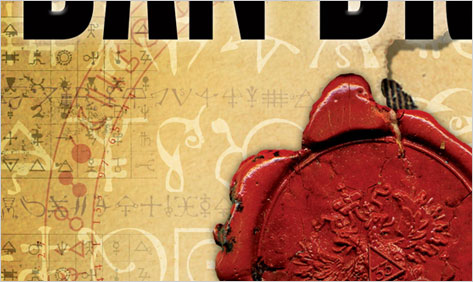 First, a confession: I liked The Da Vinci Code. This news is even more of a surprise to me than it might be to those who, years ago, heard me quip that I quit reading it because “the moment the albino assassin came through the door, I left.” The novel’s clunky opening sentence (“Renowned curator Jacques Sauniere staggered through the archway of the Grand Gallery”) foreshadows Brown’s penchant for stilted turns of phrase, and the most loudly proclaimed facts about ancient rites and secret societies are often nothing of the sort, but by now I understand why the fascination of 80 million readers made The Da Vinci Code such a massive phenomenon.

It’s not for the expected reasons. Sure, Robert Langdon’s love for semiotics and tweed jackets echo those of another professorial type named Jones, but Dan Brown’s hero eschews action for more cerebral approaches, leaving what passes for ass-kicking to his beautiful code-breaking sidekick, Sophie Neveu. The emphasis on “the sacred feminine” in tandem with those millennia-old skeletons crawling out of the Catholic Church’s closet echo Katherine Neville’s 1988 bestseller The Eight, which also played fast and loose with accepted history (even as it made readers feel smarter) and beefed up the girl power. One could also make the argument that Brown has expanded and enhanced the hallowed master plots of Lester Dent (Doc Savage), taking pulp perfection to a bursting extreme. But for me, when I returned to it recently, The Da Vinci Code exhibited strange premonitions of Stieg Larsson’s Millennium novels, The Girl with the Dragon Tattoo and The Girl Who Played With Fire, two books that both emulate and transcend obvious influences.

Brown and Larsson are both better at crafting narrative engines than sentences, and both manage to hook the reader with seemingly unimportant expository dumps and rambling pages of dialogue. What really links these two authors together, however, is the sheer, unadulterated joy that comes through in their thrillers. Clearly, both love what they write and are made giddy by the dual prospects of educating the reader about their pet projects (Brown on how ancient religious rites permeate society, Larsson on the way society abuses and discards women) and finding clever ways to keep the pages turning. Such fervor can’t be faked; readers not only smell the false article a mile away, they put up with a lot — including frequent turns of cliché — to get to a taste of the real thing.

And there lies the rub of The Lost Symbol, a book six years in the making. Its contents appear to be linked inexorably to the years of hype and expectation that formed the wake of The DaVinci Code. It can’t possibly sell as well as its predecessor — or can it? More pragmatically, can it sell in sufficient quantities to meet the hopes and bottom line of its publisher, Doubleday (now merged with Knopf) and that of its parent company, Random House? The same conglomerate went through similar hype deflation a decade ago with Thomas Harris’s Hannibal, which fans justifiably hated for how Harris turned a menacing villain into a cannibalistic hero, the apparent result of an author falling too hard for his creation. (And the less said about Hannibal Rising, the better.)

No wonder then that the mood at the launch party for The Lost Symbol, held on September 14 in midtown Manhattan’s opulent Gotham Hall, was a mix of stately old-world glamour and barely suppressed anxiety, with so many corners of the publishing industry having a vested interest in the book’s success. And yet, perversely, as soon as The Lost Symbol blares its opening “FACT” — about a document locked in the safe of the director of the CIA — high stakes and impossible expectations are dissipated with the gleeful pop of a balloon.

Let’s get right to the bottom line: The Lost Symbol works, albeit with reservations. It works because whatever mental alchemy Dan Brown needed to turn away from the noise and ramp up his creative signal, to stay away from distractions and focus on the story, takes hold with the opening utterance that “the secret is how to die.” From the first sentence, we know what we’re in for: there’s a traitor in the midst of a sequestered society — this time, as long-rumored, it’s the Freemasons — whose members include the most powerful people in the land, and our villain hungrily searches for the solution to an age-old proof known to few, doubted by many, and scoffed at by far more. Last time out the quest was for the Holy Grail; now it’s for The Lost Word, or maybe, as I kept thinking of it as I turned the pages, L’Elisir Pensiero (for the Italian-challenged, that’s the “Elixir of Thought.”)

Once again, Robert Langdon is Our Man Skeptic. Once again, he’s summoned by an early-morning phone call at the behest of someone he trusts, this time his longtime mentor Peter Solomon, who besides his father is “the other man I never want to disappoint.” But the Smithsonian bigwig has gone MIA, and the pretext for luring Langdon to the nation’s capital — a last-minute substitution to give a lecture — gives way to more pressing concerns, like reuniting Masonic pyramids with their capstones, cracking codes that mix multiple eras of semiotics, incurring the ire of larger-than-life CIA directors, and staying out of the way of the aforementioned villain, who has a nasty tendency to make grandiose statements, go to extreme lengths to stay celibate (just like The Da Vinci Code‘s albino assassin — what’s up with that?), and engage in torture tactics possibly condoned by the previous Administration.

The Lost Symbol has much to impart about the mind-body problem as filtered through the work of Peter’s younger sister Katherine, who more than dabbles in noetic science, or “leading edge research into the potentials and powers of consciousness”, according to the website of the real-life Institute for Noetic Science, based in Northern California. “The truth was that Katherine was doing science so advanced that it no longer resembled science,” which means that her personality is a bit lacking when she’s in the midst of danger — as she often is — but brightens up in flashbacks when she explains how a human soul can be weighed (“High-precision microbalance…Resolution down to a few micrograms”), or when she chides Langdon for his innate skepticism with regard to her chosen field: “Is it not possible that we are still living in the Dark Ages, still mocking the suggestion of ‘mystical’ forces that we cannot see or comprehend? History, if it has taught us anything at all, has taught us that the strange ideas we deride today will one day be our celebrated truths.” The psychology is purely of the pop variety, its predilection for positive thinking glossing over the dark groupthink-y side of communal thought. Katherine’s statement about how truths are tempered by changing times, however, bears out in a different way, as pertaining to technology. It’s strange and discombobulating — in a thriller so chiefly concerned with Ancient Mysteries and sacred rites — to see an iPhone used as an important plot device, Langdon scratching his befuddled head over Twitter (“You know, I still haven’t learned how to send a twitter.” “‘A tweet,'” [Katherine] corrected, laughing”), and a young woman gushing over Katherine because she’s blogged about her. But because Brown has wisely let six years of time elapse between adventures, he’s right to acknowledge the leaps and bounds made on the technological scale, even as he takes care not to dwell on them too much.

While The Lost Symbol operates through Langdon’s earnest, dangerously naïve eyes (the idea that teachers speak openly, his italicized declaration late in the book, and don’t teach in code, seems a tad disingenuous from the man who earlier on teased his students with all manner of hidden hints and winking assertions), Brown hasn’t lost his sense of self-deprecation and cornball humor. “New York Editor” Jonas Faukman — the anagrammed version of Brown’s editor at Doubleday, Jason Kaufman — reappears to further the plot, grow frustrated at Langdon’s inability to deliver his latest manuscript, and shake his head that “Book publishing would be so much easier without the authors.” A woman who recognizes Langdon on the chartered plane to Washington enthuses over his book “about the sacred feminine and the church,” only to apologize, commiserating that he must get tired of being recognized: “Your uniform gave you away…[t]hose turtlenecks you wear are so dated. You’d look much sharper in a tie!” Even at the apotheosis of danger, Langdon still has time to muse that “calming visualization had been the only way he had managed to survive a recent stint in an enclosed MRI machine…that and a triple dose of Valium.”

Eventually order is restored, the Solomon family finds unexpected keys, and Langdon gapes anew at the wonders of Washington D.C., from the top of the Monument to the bowels of government chambers; untold connections keep clicking into place. Brown’s brew is strong and entertaining, like the Saturday afternoon serials of yore, enough to dissolve the frenetic chaos of real life for a few hours. But The Lost Symbol wages a continuous battle between the cerebral and the visceral, with the balance tipping too often towards the former at the expense of the latter. Saving the world and unlocking its magical mysteries are all well and good, but maybe next time the stakes have to hit Robert Langdon more locally to initiate the man into a more publicly known closed society — those of the smartest action heroes in popular media.

Sarah Weinman writes “The Criminalist”, a monthly column coming soon to the Barnes & Noble Review, and “Dark Passages,” an online crime fiction column for the Los Angeles Times. She blogs about the genre at http://www.sarahweinman.com.