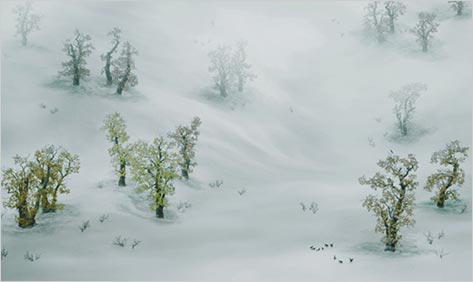 The third and final installment of Lev Grossman’s Magicians trilogy, The Magician’s Land, begins at “just another strip-mall outpost of a struggling chain,” a bookstore in a mall outside Hackensack, New Jersey.  Quentin Coldwater, the magician of the title, remains after the store closes, along with a small group of fellow patrons, to audition for a freelance job. The boss is a talking crow with an attitude, who offers each of the group $2 million for their magical assistance. The job? To retrieve a talisman of tremendous magical power. There is, of course, a catch: In order to retrieve the case, the team must break an “incorporate bond,” a kind of permanent attachment to the object in question that, to everyone’s knowledge, has never been broken before. And to be on the team, the gathered applicants must pass a seemingly simple test: they must win a game of cards with the crow’s chosen assistant, an expert in probability magic.

Each of the novels in the trilogy opens with a test. Book 1 of the series, The Magicians, begins with Quentin taking the entrance exam to Brakebills, a sort of Hogwarts-on-the-Hudson, where he and a clique of sulky teenage American student magicians learn the arts that will eventually lead them to the magical realm of Fillory, a world Quentin thought existed only in his favorite childhood fantasy novels. Book 2, The Magician King, starts in Fillory, with Quentin and his three surviving friends — Fillory being more dangerous than it appears — ruling as the kings and queens of this land, on a royal hunt for a magical talking animal, the Seeing Hare. They hope for a divination and possibly a quest, though the hare, once captured, only foretells death, destruction, ruin, and despair.

All these then have come to pass as the third novel opens, and so Quentin is now a little older, if not wiser, no longer the king of anything except his own pain.  When the crow mentions that the aforementioned talisman is inside a leather Vuitton suitcase, monogrammed for one Robert John Chatwin, he knows his possibly final chance with that realm has arrived. The suitcase is a link to the Chatwins, the child heroes of the original Fillory books — who, we have learned thus far, were real children who became real adults, and who were not as blessed by their visit to the magical realm as the happy endings of those stories might have made it seem.

Quentin knows this from hard experience, but even so, “Quentin felt like an addict who’d just caught the faintest whiff of his drug of choice, the pure stuff, after a long time sober, and he was already savoring his imminent relapse.”

The reader also. For this, to be sure, is addictive stuff Grossman spins — a love letter to those novels from your childhood that you wanted to enter and never leave, but written for grown-ups, with canny references to both technology and pop culture, and writing that makes magic seem alternately logical and, at moments, a perfect metaphor for the characters’ emotional states. Part of the magic of these tales of modern-day magicians, for example, is that its heroes and heroines cannot really enchant away what they don’t like about themselves or their histories. Incorporate bonds are, then, if not the novel’s real subject, at least its major theme. There is the one between Quentin and his lost beloved, Alice, who, when they were student magicians together, attempted a spell too large for her abilities, which changed her into a malevolent spirit of pure magic. Another deals with the ties between Quentin and Brakebills, his alma mater, where Alice died, and where, after his sojourn as ruler of Fillory, he returned to take a humble adjunct teaching job. A third binds him to his former student Plum, who awakened the now-deadly Alice through a magical school prank gone wrong. When Quentin did the only thing he could to save Plum, he was fired, and she was expelled. When he finds Plum at the audition for a spot on the talking bird’s team of sorcerous thieves, he tries at first to ignore her — but she, like Quentin, ends up making the cut. And in the pursuit of the enchanted suitcase, Quentin finds his own quest: that he might be able to save Alice and turn her human again.

Grossman’s skills as a novelist are at their peak, and they need to be: The job of the third novel in a trilogy is to bring both its own narrative and the cycle to a satisfying end — to engage with all that has come before and wrap up a story that moves across all three novels. Placing Quentin back at Brakebills is the perfect literary device for setting all of this up — there is nothing quite like teaching at your old school to give you some perspective on who you were and the choices you’ve made. The concept of a new life, colored by its triumphs and disappointments, set over the scenes of the old one, allows Grossman the freedom to thread in the previous novels’ material quite naturally. Attach this to a magical Ocean’s 11 caper and a contemporary reinvention of the ancient myth of the Fisher King, and you’ve got, well, the recipe for The Magician’s Land. And a lot of fun.

The stakes for this novel would be high even if the second novel in the series weren’t widely regarded as being even better than the beloved first. Unfortunately for Grossman, outdoing the two novels that have come before this one was the only way not to disappoint us. Fortunately, he more than succeeds. The Magician’s Land isn’t the place to begin with if you haven’t read the earlier books in the trilogy — but if you have, you’ll want to start them all over again. to appreciate the layers to their design.