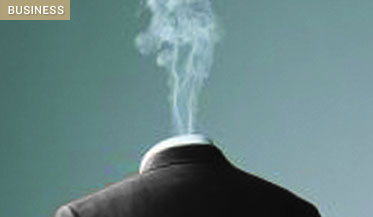 Matthew Stewart, the proud but virtually unemployable holder of a doctorate in philosophy from Oxford, found himself rather suddenly — and virtually without qualification — hired as a management consultant by one of the field’s leading firms. He was an “experiment,” one of the wild-card, non-MBA types that big consulting groups make a practice of taking on. The career that would supply him with a large inventory of material to support his merciless indictment of the whole idea of business consulting appears to have begun — given the book’s interweaving of autobiography, philosophy, history of management theory, and on-the-job anecdotes it’s hard to tell for sure — with a company called A. T. Kearny. Most of Kearny’s employees had learned to make believe they knew what they were doing at the notorious McKinsey & Company — a firm that, according to Stewart, resembles Kearny in being useless and in fact risible in the final analysis. Some of those Kearny “experts,” Stewart included, went on to form the “boutique” firm called the Boston Consulting Group. The BCG is at the center not only of Stewart’s personal story but of his jeremiad against the entire “profession,” which is extremely convincing and therefore appalling. But as we’ll see, there are a few kinks in the hose with which the author beats his subject nearly to death.

After a brief account of his own improbable entrance into business consultancy’s cohort of brigands and mountebanks (including his introduction to “the Whale” — a graph that his colleagues used to analyze the profitability of their client corporations and their own business), Stewart tells the story of America’s first management theorist, Frederick Winslow Taylor, author, in 1911, of The Principles of Scientific Management. Taylor based his theories on an experiment he conducted for the Bethlehem Steel Company, in which, by means of “scientific” equations and personnel selection — in favor of the “mentally sluggish” — he tried to improve the efficiency of men loading pig iron into wagons. This experiment, which initially seemed to increase productivity but ultimately proved to be bogus, poured the foundation for efficiency studies in general, upon which the skyscraper of management consulting, bedecked with decorative MBA degrees, would eventually come to be built.

Intermittently throughout the book, Stewart gives us the history of Taylor’s successors in the increasingly long line of management “gurus.” There is the Australian knockabout Elton Mayo, who called himself Doctor Mayo despite having no claim to the title; Mayo oversaw weird workplace modifications for Western Electric that resulted in largely fictional “improvements.” There is Robert Owen (after whom my father was named), whose utopian Indiana community, New Harmony, deteriorated within two years into Old Discord. There is Peter Drucker, who appears to have appropriated the concept of “strategy” as his own device, though of course it is as old as the idea of profit itself. And many others, right up to Jim Collins, the wizard of the “Good to Great,” and Tom Peters, the apostle of “Excellence,” both of whom Stewart employs as exhibits in his very convincing case against gurudom. This case’s summation is devastating:

is not that they fail to see into the future but they are in a certain sense behind the times?. If you want to succeed, they howl in unison, you must break with the pack. But the guru literature itself is the pack. True to their calling as mass entertainers, they are followers rather than leaders.

This sense of fraudulence haunts Stewart’s account of his own, fairly brief career as a consultant and one of the original members of the Boston Consulting Group. “You know the definition of a consultant?” a banker asks Stewart. “Someone who looks at your watch and tells you what time it is.” At the very beginning of his work, Stewart tells us, “I was already an expert in?the German asset management market. After all, I had studied nineteenth-century German philosophy?.. Consultants, if they are wise, limit their claims of expertise to just those subjects in which no one else can claim to know what they are doing?. Consultants also know that an outrageously unjustified level of self-confidence can add several points to one’s perceived expertise quotient.” And so on.

But there’s more to this assault than just withering irony. Stewart, as a philosopher, digs below the surface of his subject matter and uncovers some of the paradoxes of business’s main goal of increasing shareholder value. It “often induces managers to engage in destructive, short term-oriented actions at the expense of a firm’s long-term goals,” he tells us. He convincingly explains how a general education in the humanities would ultimately prepare people for business better than business schools do. And by means of grimly hilarious charts and lists, he discusses how consultants invade businesses like a cancer, metastasizing into all their departments and terrifying their employees; the five specious pronouncements of gurudom (it’s always a “frightening” or “dangerous” time, business bureaucracies kill businesses, there is good news coming if you will only listen to me, “You have the power,” and “Just look at me!”); and “the pyramid game,” which illustrates the eventual conflicts that will be produced by any enterprise in which people must both compete and cooperate.

As Nassim Nicholas Taleb showed in his marvelous, often Delphically oracular bestseller of two years ago, The Black Swan; as recent financial experience has reminded us; and, not least, as our lives and the lives of others ought to make plain — no one can in the long run accurately predict the economic future, or any other kind. But that is precisely what businesses and consultants try to do, and time and time again claim to be able to do, with, generally — so this book so scathingly asserts — no better than blind-dart-game accuracy. Near the end of The Management Myth, Stewart appears to be claiming that a more rational, humane, and long-run approach to capitalist activity — one in which consultants and everyone else are not always trying to squeeze every dollar of profit from every person or transaction every hour of the day — can make the system work better. But given the power of the book’s preceding indictments, the reader has to wonder if this is true, and if the author really believes it. His own story ends in a lawsuit, with his former partners trying to deny him what he is owed as he leaves the firm. The politics and deceit within this consultant group seem to out-shell the shell game they practice with other companies.

A friend of mine in publishing told me he liked the proposal for this book when it was submitted to him but decided not to try to acquire it because it told a relentlessly sour and negative story. With due respect for him and his opinion, and even in agreement with his feeling that the book is unlikely to sell well, I have to say that it is written with tremendous intelligence, humor, paradoxically uplifting dyspepsia and misanthropy, and an elegant, if sometimes over-complex, structure.

So where are the kinks in the hose I mentioned up above? Well, in places it’s as if Stewart has himself been stricken with the cancer of consultancy and hasn’t quite managed to irradiate it completely from his system. Every now and then he’ll call an awful boss “a decent analyst,” or say that “Dr.” Mayo’s insights were “undoubtedly important,” or stipulate that “industry sectors have an important place in strategic thinking,” or assert that “most managers, consultants, and MBAs, to be sure, are good people and do good work.”