The Media Relations Department of Hizbollah Wishes You a Happy Birthday: Unexpected Encounters in the Changing Middle East 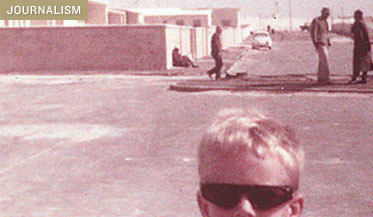 On October 3, 1997, New York Times correspondent Neil MacFarquhar was bicycling down Fifth Avenue and got hit by a bus. This was a bad day for MacFarquhar but, in a strange way, a lucky one for journalism. After a coma and long recovery, MacFarquhar returned to work with lingering frailty and a permanent medical excuse never to cover another war. His Sarajevo and Kabul days over, he moved to Cairo in 2001 and reported on the parts of the Middle East most underserved by foreign journalists, namely the parts that are not war zones.

War zones are in some ways all alike, but countries that simmer in relative peace all simmer in their own ways. Show me a book about Arabia that doesn’t feature a casting call of masked gunmen and earnest-but-ignorant American soldiers, and I will show you a book worth reading. MacFarquhar’s new book makes stops in war zones (Baghdad, Beirut), but it glances at these stock figures of Middle East reportage only obliquely. Instead it concentrates on the simmering. In a geographically wide-ranging series of portraits, it depicts a region more complicated and more interesting than coverage of its signature conflicts suggests.

MacFarquhar’s title, The Media Relations Department of Hizbollah Wishes You a Happy Birthday, refers to a cordial August 2003 email from Haidar Dikmak, a flack for the militant Shiite political party in Lebanon. The book sustains the ironic, half-menacing tone of the title, and in its progress from one country to the next, it focuses on issues and personalities of interest to Arabs themselves, rather than the issues of narrow interest to the United States. As one government official notes explicitly, foreign reporters tend to arrive and raid the country for Hizbollah stories.

But to MacFarquhar and to nearly all Arabs, Lebanon is a country best known not for war but for entertainment and glamour — a sort of semi-debauched Middle Eastern Hollywood. (The Lebanese Broadcasting Corporation, whose music videos and singing temptresses entertain patrons in crowded lunch spots all over the Middle East, is known as Lubnaniyaat Bidun Culottes, or Lebanese Girls Without Underwear.) Fairouz, the beloved Lebanese hit singer, often goes unmentioned in books like this, an omission that would perhaps be comparable to a book about modern Iceland that never mentioned Bj?rk. MacFarquhar awards Fairouz several pages that explain her fans’ ardor in illuminating detail.

In his visit to the Bekaa Valley, he bypasses the usual Hizbollah officials to meet Shiite dairymen whom the U.S. and Lebanese governments had forced to give up a lucrative hashish business and replace it with cows. Cows don’t take especially well to the Bekaa, but at one point hash grew so readily, and earned so much cash, that even Bekaa farmers wore Armani. Again, MacFarqhar’s method is oblique and powerful: the farmers’ annoyance illustrates one of Hizbollah’s enduring selling points, which is that it encourages Shiite Lebanese to forswear the help of outsiders and to keep dealings within their own community. This insistence on dogmatic self-sufficiency (which MacFarquhar points out is contradicted by their reliance on Iran) casts Hizbollah more in the model of North Korea or Albania, a comparison considerably more interesting than the usual bickering over whether Hizbollah is a terrorist organization.

The book’s strongest moments are in countries even less saturated with coverage than rural Lebanon. MacFarquhar visits Bahrain to meet a Web dissident, and Yemen to meet a mad German who operates a commercial brewery in Aden despite being besieged by Islamists. The early chapters recount a boyhood on the Libyan coast, where the author grew up in an oilman’s family, and where he returned only decades later, to cover Muammar al-Qadhafi. The years before Qadhafi have an appealingly foreign air, a sort of view-across-the-fence analogue to Abdurrahman Munif’s wonderful stories of American oil exploration through Bedouin eyes in Cities of Salt. When MacFarquhar returns, Qadhafi has thoroughly remade the country, sometimes for the worse but always for the weird. Camouflaged female commandos guard the Libyan leader everywhere he goes, and he lectures reporters in elaborate purple gowns. Taking a page from Sapurmurat Niyazov, the Turkmen dictator who named one month after his own mother, Qadhafi renames February “Light” and August “Hannibal.”

The last third of the book is less engaging, attempting to explain the “changing Middle East” through a more disciplined tour of disordered states. Each state is an instance of one of several common afflictions in Arab societies — for example, secret police, breakdown of law and order, and tribalism. Though each of these later chapters contains its gems, they lack the unpredictable pleasures of the rest of the book, and they lead to an epilogue in which MacFarquhar packages a few relatively banal directives for American foreign policy (“address the concerns of the people in their countries at their level”). Perhaps he was preparing for the inescapable and heartbreaking banality of his current Times beat covering the United Nations. In any case, readers will almost certainly forget these directives, because they are neither bold nor new, even if they are sensible, and they conspicuously lack the vigor that MacFarquhar’s excellent ground reporting surfaced in previous sections. In a way, the modesty of these prescriptions befits a reporter who has spent years in the region, and who is aware of the manifold shortcomings of nearly any possible American policy. Keeping American public diplomacy simple and promoting democracy with extreme caution are some of the few suggestions one can confidently give policymakers.

Most of all, though, MacFarquhar’s achievement is to portray a region in full, and to give the accurate impression that there are many more stories left untold than told. He speaks Arabic, and at one point mentions that one of his favorite Arabic words is tabaruj, a multivalent noun that means “displaying one’s charms” (and, when applied to women, connotes feminine guile and hussydom). MacFarquhar’s is one of the few books that really illustrate the charms of the Middle East and gives a sense of containing not just multitudes of masked gunmen and fanatics but multitudes tout court. In a region where clichés grow even more readily than hash, this book is no minor achievement.

Previous Previous Post: The Foie Gras Wars: How a 5,000-Year-Old Delicacy Inspired the World's Fiercest Food Fight
Next Post: Nobody Move Next