In 2003 during my senior year of college, I was sitting in a friend’s dorm room discussing America’s then-imminent war in Iraq when her computer started playing The Cure song “Killing an Arab.” The song’s lyrics paraphrase the pivotal scene of one of the most widely read novels in the Western world, Albert Camus’s The Stranger. Here the novel’s protagonist, a French Algerian named Meursault, stands on a beach and points a gun at a man he refers to as “the Arab”: We could not help but notice that, though the choice might not matter to the man holding the gun, it mattered a great deal to the man on the other end of it—just as whether or not America would invade Iraq would amount to roughly the same for the two of us, but would have consequences all too real for Iraqis. The meaninglessness of existence was yet another commodity the world distributes unequally. I thought of that afternoon in 2006, when, with the war in Iraq at what then seemed its bloody lowpoint, it was reported that George W. Bush was reading The Stranger and chatting about existentialism with his press secretary. I’m not sure I thought of it again until I read Algerian journalist Kamel Daoud’s excellent debut novel The Meursault Investigation, which tells the story of those for whom it did not amount to the same that Meursault decided to fire that gun: the family of the nameless Arab the gun was aimed at.

Daoud has named the Arab “Musa” and given him a brother named Harun, seven years old at the time at the time of the shooting. Now an old man, Harun narrates the novel by telling a stranger his life story at a bar called The Titanic. At one point he summarizes The Stranger, casting it in a much different light than does The Cure:

A Frenchman kills an Arab who’s lying on a deserted beach. It’s two o’clock in the afternoon on a summer day in 1942. Five gunshots, followed by a trial. The killer’s condemned to death for having buried his mother badly and with too much indifference. Technically, the killing is due either to sun or to pure idleness. A pimp named Raymond is angry with a whore and asks your hero to write a threatening letter, which he does. Things go downhill, and then the story seems to resolve itself in a murder. The Arab is killed because the murderer thinks he wants to avenge the prostitute, or maybe he has the insolence to take a siesta. You find my summary unsettling, eh? But it’s the naked truth. All the rest is nothing but embellishments, the products of your writer’s genius.

Here we do not have the existentialist act that Smith sings of, but what Harun calls “a banal score-settling that got out of hand,” which only afterwards “was elevated to a philosophical crime.” The hostility of this summary is key to Daoud’s project. So is the use of “your hero” and “your writer,” a provocation to the book’s Western readers. But no less important is the nonchronological, wordy, repetitive nature of this summary. Complaining that Camus (or rather Meursault—more on that later) “tells a murder story with the genius of a mathematician examining a dead leaf,” Harun tells his story like someone who has been affected by it: he stumbles, he skips around in time, he cannot move on.

For this reason, Daoud’s writing does not share The Stranger’s straight-ahead narrative momentum, or the comic energy of a protagonist who doesn’t care where his story takes him. Investigation’s force derives from the pathos of watching a powerful, insightful, witty mind recount a life that has mostly gone unlived, thwarted by early trauma. 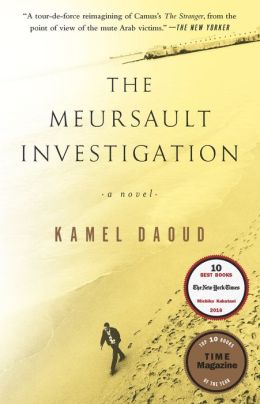 Where Meursault begins his story with the famous sentence “Maman died today,” Harun begins his by saying “Mama’s still alive today.” Daoud has suggested that the relationship between mother and son “reflects the relationship between Algerians and their motherland.” Whereas Meursault operates free of the past and of politics, Harun does not. His mother simultaneously hates Harun for being alive while his brother Musa is not, clinging to him as a subpar replacement for her dead son. Harun is in his twenties when the Algerian war for independence arrives, still too much under his mother’s spell to leave her. Others deride him for not “joining the brothers,” not knowing that it is impossible for him to extricate himself from his own, long-dead brother. Even the Meursault-like crime that Harun eventually confesses he committed after the war for independence was won in 1962 is stage-managed by his mother, a displaced act of vengeance for Musa. Though he claims to have “known the love of lots of women,” (which sounds like the unconvincing boast of a virginal teenager), Harun seems to have never had a significant relationship with a woman apart from a brief, unconsummated outing in 1963 with a graduate student who came by asking questions about a book called The Stranger, by a man named Meursault. Meursault is condemned to death by the hypocritical French colonial government in part because he starts a sexual relationship the day after his mother’s funeral rather than go through the motions of grief—in other words because he chooses to live in the present rather than the past—but at least he gets to make a choice. Life is absurd for colonizers and colonized alike, but occupiers have all the fun.

Daoud’s most cheekily Oedipal authorial move is to make Meursault the author not only of The Stranger but also of Camus’s other books, references to which abound. The move makes Western readers question our standard insistence on the separation between author and character, preempting our objection that the dehumanization of the Arab is Meursault’s rather than Camus’s.

Yet with Camus lying on the ground, Daoud chooses not to shoot. He plainly reveres Camus and acknowledges his debt to him. It does not seem accidental that the inescapable Musa is a near-anagram of “Camus,” or that The Meursault Investigation takes its form—a rambling monologue/confession in a bar—from another Camus novel, The Fall. Harun makes it clear that he sides with Meursault against organized religion. (There was recently a fatwa on the Facebook page of an imam calling for the Algerian government to execute Daoud, a reminder that just because a situation is absurd does not mean that its outcome is not of the highest importance.) The Meursault Investigation is an important correction of a novel that Daoud clearly loves. And as the narrator of The Fall asks: “To whom should one talk back in this world, if not to what one loves?”

The B&N Podcast: Charlie Mackesy on our Book of the Year
Previous Previous Post: Looking Back
Next Post: The Golden Age of Murder Next