The Museum of Eterna’s Novel 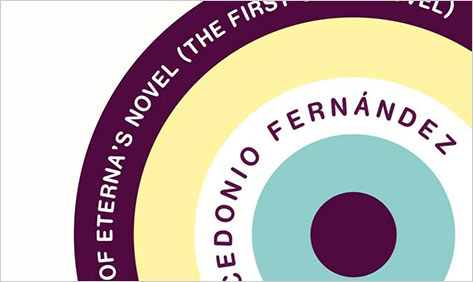 “Avant-garde” is a slippery term, but it can be useful shorthand to call attention to the sort of literature that is designed to frustrate most readers’ expectations or overturn received wisdom. Sometimes it is concerned with the revelatory inversion of a cliché — viz., originality breeds contempt. Books in this line unabashedly bore, flummox, or chafe. Their demographic, by extension, is a small one: the experienced or, alternatively, those looking to get experienced… You know who you are; read on if you’re keen on narrative excursions that prance past the rim of a manicured plotline.

The Argentinean writer Macedonio Fernández (1874-1952), renowned for his influence on Borges, proved himself a model avant-gardist when he wrote in The Museum of Eterna’s Novel (The First Good Novel). “This will be the novel that’s thrown violently to the floor most often, and avidly taken up again just as often. What other author can boast of that?“

Fernández’s book spurns the earnest advice of squads of creative writing instructors. Anachronistically, it brushes aside Elmore Leonard’s no. 2 rule for writing fiction: “Avoid prologues: they can be ­annoying, especially a prologue ­following an introduction that comes after a foreword.” The editors at Open Letter should be commended for adding a preface and an introduction to this book which is half composed of prologues. Assuredly, this is one of those “challenging” works that derive benefit from exegesis, especially for those who approach it without any schooling in philosophy.

Then again, even if one has a taste for ontological disputes, there are syntactical hurdles to be surmounted. Margaret Schwartz’s translator’s introduction nails the quandary posed by Fernández’s style: “[It] is best characterized as baroque…. Sentences may go on for pages, without any temperance with regard to punctuation, with open parenthesis dangling and semi-colons propping up impossibly convoluted clauses. An idea begins, only to be interrupted by a different thought, then the first idea returns without fanfare or apology.” The last noun in her sentence is somewhat redundant since the author writes in the novel, “I don’t have anything to apologize for.”

And so the concessions, gracious reader, will have to be shouldered by you. Because Fernández wants nothing less than to bury the tropes of the traditional novel, all but the most avant of readers will find the accoutrements they’ve come to expect peeled away (ergo its pretentions to being the “first good novel”). Wanderers in The Museum of Eterna must submit to knowing the”plot” of the novella before it begins, since the prologues scuttle all hopes of losing oneself in a tale that apes the contours of daily life or provides the hospitality of escapist fiction. Readers must also make do with forgoing the company of three-dimensional characters in favor of conceptual cut-outs with names such as Sweetheart, Maybegenius, and The Gentleman Who Doesn’t Exist. This description of John Mountainclimber demonstrates the manner in which Fernández conducts their somewhat abstract antics:

This protagonist has always been known for his invariable position, which makes him afflictingly interesting: John Mountainclimber, driven by love to a life of adventure, on a mountaintop with novelistically opportune precipices, has fallen several meters from one of the same, something that’s always a pity, and even more so in those moments when the story can’t be put off; proof of this is that the story begins by describing an accident, which serves as the impetus for the novel… and for the reader as a way of maintaining suspense and worry…

This is an approach to storytelling that can leave the first-time reader feeling mired in its self-attentions. But that should be expected given that the novel wants to inculcate a sense of metaphysical entanglement as it explores two of the most rudimentary concerns of human life: love and death. At bottom, The Museum of Eterna’s Novel (The First Good Novel) aches to free its readership from the fear of death by insisting that consciousness cannot experience its total cessation directly,”Death is only death of love; there is only the death of the other, her concealment, since for oneself there is no concealment.” As a work of devout humanism, this novel is conceived around the best sorts of frustrations.