The No World Concerto

By A. G. PORTA; Translated by DARREN KOOLMAN and RHETT McNEIL 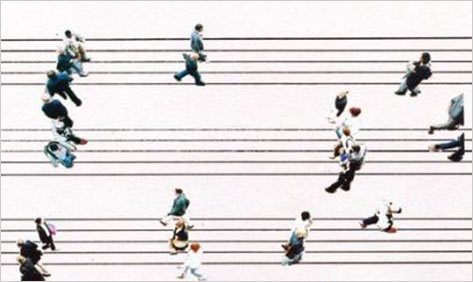 In 1984, two young writers made their Spanish prose debut with a strange dual novel titled Consejos de un discípulo de Morrison a un fanático de Joyce (Advice from a Morrison Disciple to a Joyce Fanatic). The book was not a commercial smash and in truth is not a great novel, but it is noteworthy for launching the career of the Chilean co-author, Roberto Bolaño.

Whereas Bolaño continued to write and publish after Consejos, eventually delivering his second novel in 1993, his collaborator, Barcelona-born A. G. Porta, went dark and reportedly abandoned literature, not returning until 1999. (Bolaño claimed that Porta spent the decade and a half wrapped up within a deep study of Ulysses.) He quickly made up for lost time, publishing a total of five novels within a decade. The first of Porta’s books to appear in English, 2006’s The No World Concerto, has now arrived via Dalkey Archive Press in a co-translation by Darren Koolman and Rhett McNeil.

The No World Concerto is a strange, ambitious title, a work that attempts to combine the forms imagined by philosopher Ludwig Wittgenstein and serialist composer Arnold Schoenberg: It might best be described as a book that wants to exist as a performance of a score residing somewhere in the confines of Porta’s skull. Or, as Porta himself writes, “it has an unsettling rhythm, like something that’s always approaching but never quite arrives.” In its constant insinuation that it is governed by obscure formal rules, the book feels reminiscent of writing from the famous French collective the Oulipo, yet it also has the feel of a Christopher Nolan film in its frequent upending of what we understand to be the book’s reality, and the slick, sketchy landscape of surfaces in which it takes place. Sentence by sentence, The No World Concerto is stylistically unremarkable; the book’s innovations, such as they are, occur at the level of large structural features that sit behind the action of this novel.

If I’m reading Porta correctly, the idea behind The No World Concerto is to construct a literary text as one might compose a twelve-tone musical composition. Before the innovations of Arnold Schoenberg, composers chose a certain key in which to compose their works (that’s why you may see, for instance, “in A Major” in the title of a composition). This method of composition necessarily privileges certain notes and harmonic combinations above others, an artifact that twelve-tone meant to change: instead of granting primacy to notes contained within a certain key, it would force a composer to use all twelve notes of the chromatic scale equally in any given piece — essentially, a composer must cycle through the notes with a systematic regularity.

In addition to leveling, twelve-tone also hastened the demise of music’s tendency to have a beginning, middle, and end (listen to a composition of Schoenberg’s at random, and you will be hard-pressed to say if it is just starting up or about to close down); thus, it necessarily brought to the fore previously neglected aspects of music. Modeling The No World Concerto on twelve-tone principles has much the same effect on Porta’s book, which resolutely declines plot or character in the traditional sense. It seems to be arranged less according to standard plot dynamics than to certain recurrent images, phrases, and even minor episodes. As do the notes in serialist music, these images and phrases appear with equal measure (perhaps even according to some preordained set of permutations). And, like musical themes, the plot points in this book continually recur, each time in elaborated and embellished form, only finally exhausting themselves in their ultimate expression.

This is all well and good, but as the great Oulipo author Harry Mathews once said, no matter how ingenious or intriguing the idea behind a literary experiment, its execution must produce “valid literary results.” So how does The No World Concerto stack up?

The book is narrated by an aging, down-on-his-luck screenwriter who has holed up in a drab Parisian hotel in order to complete a film script. He may or may not be having an affair with a young, beautiful pianist — he is for certain writing his screenplay about one, and occasionally he receives missives that he believes are from a girl much like her, the missives containing fragments of a novel-in-progress that the girl is writing. The screenplay that he is writing is almost identical to this real-life situation: it involves a pianist who has quit her career in music in order to write a novel obsessed with Wittgenstein and space aliens, which is almost exactly like the one the girl may be sending the screenwriter. Porta occasionally attempts to fill out the characters of the never-named screenwriter and the girl (there are very few proper names in this book), but for the most part they remain the playthings of the book’s desire to mirror and entwine these stories.

This conceit plays out for nearly 400 pages of dense, single-paragraph prose. The plot feels almost salutary, as though Porta has included it simply because he needed to draw from the traditional novelistic toolkit in order to have something to hang his musical scheme upon. What little story there is builds around the fact that the screenwriter, estranged from his wife, is slowly running out of money and is accepting the fact that his life is a failure, while also hitting on every young, desirable woman in sight. The plot’s other half involves the girl having second thoughts about quitting her career as a pianist to become a writer.

The book the girl is attempting to write is to be titled The No World Concerto, and it grows out of a bastardization of Wittgenstein’s Tractatus Logico-Philosophicus. It begins with the statement “The No World is all that is the case,” emending Wittgenstein’s famous sentence with that single negative, and its skeleton consists of invented quotes that are attributed to the aphoristic text. The book-within-a-book The No World Concerto is at one point described as, “simply a name for the all-encompassing thought, the thought of which all things ultimately consist,” which is not a bad description of the main point of Porta’s book. It seems that he means to imply that the screenwriter and the girl are simply emanations of one another’s subjectivities, like the famous drawing of Escher’s that shows two hands drawing each other. As such, the book constantly pivots around thoughts that one writes and the other has, as, for instance, here:

The story is his own invention, but he knows he borrows heavily from the girl, from the stories she tells him, from the extracts of her novel she reads to him or that get delivered to his hotel, with commentaries scribbled in the margins, which he incorporates into his own narrative. It’s dawn. The girl’s looking out from the balcony, standing almost exactly where she was the previous night while observing the front of the Grand Central Station, as if deliberating whether or not to go there….

There is no doubt that Porta’s book is a carefully conceived and painstakingly rendered literary experiment, and  noteworthy insofar as it brings Schoenberg’s and Wittgenstein’s ideas into conversation. Its main strengths are its inquiry into what exactly fiction is, and its twinned examination into how we conceive of the world around us and how it conceives of us. These aspects make the book, from time to time, a genuinely worthwhile experience.

But much of The No World Concerto drags: it is a far better book in the aggregate than in its particulars. Porta’s examinations of the idea that the world is, ultimately, our impressions of it, as well as its portrayals of youth and old age, too frequently feel clichéd. Moreover, it is a lengthy and dense work, and too often one must wade through swamps of prose in order to finally reach a reasonably luminous moment. It is probably true that to have trimmed the fat would have been contrary to Porta’s method — because here the fat is an integral part of the work — but that makes the book no less responsible for its failures.

In the end, The No World Concerto is perhaps just what an experiment should be: a thing that succeeds in some ways and fails in others, with both its successes and failures illuminating the deeper nature of that thing it is experimenting upon. One hopes there are writers paying attention to the results.

Veronica Esposito is a critic, writer, and editor whose work has appeared in The San Francisco Chronicle, The Philadelphia Inquirer, The Los Angeles Times, and many other publications. In 2004 she created the widely praised literary website Conversational Reading, which can be found at http://conversationalreading.com.