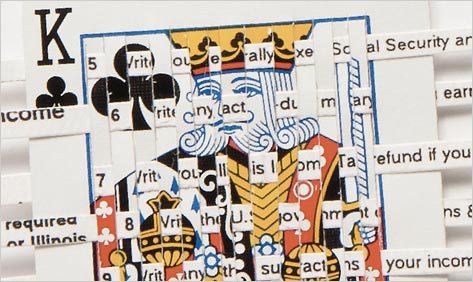 Thework published after a great writer’s death often disappoints. ConsiderHemingway’s True at First Light, or Nabokov’s notecards for The Original of Laura, or the work Elizabeth Bishop declined to publishduring her lifetime, which fills much of a recent volume of her collected poetry. These books are unformed and unsatisfying; theyspeak of a need alien to the person who wrote them: a publisher’s need forrevenue; an audience’s hunger for more by a beloved writer. Reasonable readersmay suspect that David Foster Wallace’s unfinished novel The Pale King will fall into this category. We don’t know howclose Wallace was to finishing his book when he committed suicide, inSeptember, 2008: was he halfway done, or had it already assumed a more or lessfinished shape? But The Pale King isnot a rough draft or a collection of disjectamembra; it is not, like Dickens’s TheMystery of Edwin Drood, a half-finished cliffhanger. Thanks to the extraordinaryefforts of Wallace’s editor, Michael Pietsch, The Pale King is as complete a novel as it needs to be. At times Ifound myself thinking it was the best thing David Foster Wallace had everwritten.

Asthose readers who have awaited its publication already know, The Pale King is about the Internal Revenue Service. Morespecifically, it is about certain events which seem likely to take place at theIRS’s Regional Examination Center (REC) in Peoria, Illinois: the implementationof a change in the way personal income tax forms are reviewed. I am notrevealing anything important about the novel when I tell you that these eventsdo not, in fact, take place, or at least they haven’t happened yet by the time thestory stops. It’s about as unpromising a subject for a novel as anyone has everthought of, but that’s the point: ThePale King is about boredom, the way Wallace’s 1996 novel Infinite Jest was about entertainment.

Infact, The Pale King is almostcompletely unboring. Like Infinite Jest,it is written in discrete sections, from multiple points of view; but where theearlier novel was a three-stranded narrative braid, the new one is a collectionof fragments which whirl around a central mystery, or void. Narrators appearand vanish; conversations take place between unnamed interlocutors. And yet thereader rarely feels lost, in part because Wallace is such a good contextualizerof esoterica (I couldn’t vet a Form 1040 after reading The Pale King, but I do imagine that I learned something about theinner workings of the IRS), and in part because there isn’t much pressure toassemble the pieces into a whole. Wallace wrote that he wanted this book tohave a “tornadic feeling,” and it does: what the novel offers is nota Pynchonian conspiracy (even if it wanders into that territory from time totime) or a Proustian closed circle, but an untotalizable collection of lives,which, like most people’s lives, have only the vaguest of plots. Their onlycertainties are death and—sorry—taxes. If Wallace had worked on it for ten moreyears, The Pale King would probablybe longer, but I’m not sure it would be any more complete, and I’m not sure Iwould want it to be. If the restructuring of the Peoria REC were narrated, forexample, and not left as an exercise for the reader, it would (like the “Assassinsdes Fauteuils Rollents” subplot in InfiniteJest) become actually boring.

Oneof the recurrent narrators in The PaleKing is a certain “David Wallace,” whose purported memoir thisbook is. The conceit could be cloying, but Wallace handles it with a frankhumor which (mostly) disarms its narcissistic irony. “Consider that in2003, the average author’s advance for a memoir was almost 2.5 times that paidfor a work of fiction,” Wallace (or “Wallace”) writes. “Thesimple truth is that I, like so many other Americans, have suffered reverses inthe volatile economy of the last few years….” It makes sense to talkabout money in a novel about taxes, but the more striking grace of this sectionis that it is free from the staging of obsessive doubt that regularly paralyzedWallace’s short fiction. In its place is something weirdly like authority.Elsewhere in “Wallace’s” preface (shifted into the body of the bookfor obscure, spurious legal reasons), he makes claims about the importance ofhis material with apparently little irony, or maybe none at all:

Fact:The birth agonies of the New IRS led to one of the great and terrible PRdiscoveries in modern democracy, which is that if sensitive issues ofgovernance can be made sufficiently dull and arcane, there will be no need forofficials to hide or dissemble because no one not directly involved will payenough attention to cause trouble. No one will pay attention because no onewill be interested, because, more or less a priori, of these issues’ monumentaldullness.

Theidea may not be original, but it is compelling. In a world which is populatedby prefabricated forms for social and personal expression, maybe power belongsnot to the celebrity with a million friends, or followers, but to the engineerwriting specifications for the next generation of code. Maybe, pace Pynchon,real power is not secret so much as it is boring.

Forthe most part, though, the characters in ThePale King don’t care about power. They’re lackeys, cogs; they just want tosurvive the tedium. If there’s anything at the heart of the story’s tornado, itis the question of how to go on living. One IRS examiner, witness to horrificevents as a child, keeps herself going by means of cruel, unfunny practicaljokes; another falls back on her beauty; a third sees ghosts. The longest andbest section of the novel, which tells the story of how one IRS examiner foundhis calling, culminates with an end-of-the-semester lecture given by a substituteteacher in the Advanced Tax class at DePaul University. The lecture is “anhortation,” an encouragement (a form at which Wallace excels: among hisposthumously published works is This isWater, a commencement address). The speech goes on forpages, but its point is this: “Enduring tedium over real time in aconfined space is what real courage is. Such endurance is, at it happens, thedistillate of what is, today, in this world neither you nor I have made,heroism.”

It’shard not to think of Wallace himself here. Enduring tedium over real time in anenclosed space is what writers do, and no one was better at it than DavidFoster Wallace, whose focus on every minute feature of his imagined world, fromthe clinking pulleys on a gas-station flagpole to the rubber thimbles on theIRS examiners’ fingertips, was unequalled by any contemporary American writer,living or dead, with the possible exception of William Gaddis. Wallace’ssuicide in no way detracts from his heroism in this regard. His death is an awfulfact, but it is also like the endings of his novels, all of which break off inmedias res: an incompleteness which makes what is there all the more vivid, andvalued.