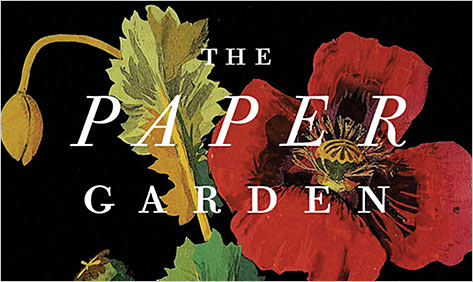 Inthis lush, humane book, noted poet Molly Peacock shows a terrific hand forcrafting prose as she delves into the life of Mary Delany, a woman whose fascinatingmilieu around 1730s London is illuminated partly by what she accomplished ather life’s end. After the death of her second husband, Mrs. Delaney embarked onwhat would finally make her always memorable life most worthy of note: aseries of flower “mosaicks”, beautifully cut layered papers thatcollage into cunning botanical renditions. The flowers that emerge out of thecut paper are a craft so fine they become art, and an art so keenly observed itbecomes a kind of science.

MaryDelaney’s mosaicks literally invented new art-making techniques, and are fullof small revolutions in craft. But they are also works outside of the main stream,fully crafted not for public consumption but in the private space of an aging18th century woman. This makes them no less fascinating thanapparently mainstream art. But because a seventy-two year old woman wieldingscissors could automatically seem grandmotherish, or “derriere-garde”as Peacock ruefully admits, Peacock bravely uses her exploration of Delany tosidestep or upend the conventional place of the feminine, the craftsy, thedomestic. Instead, Peacock uses Delaney’s fascination with flowers as a way ofmeditating on things as large as North American exploration, the place of theexotic within the domestic, the politics of court, and the role of women withinGeorgian England. Peacock’s exploration is itself expertly stitched. Here’sMary getting dressed for court decades before she would ever cut a single paperstamen: “By this time Mary’s breasts and belly were flattened so that shewould have looked like an upside-down flower: her head, neck, and torso thestem; her arms the leaves; and her skirt the flowerhead.”

Justas Delany makes a cosmos out of flowers, Peacock makes a cosmos out of herinterest in Delany’s world. In a remarkable act of observation, recuperation,and assemblage, Peacock weaves her own collage—cutting between Mary Granville’searly life and times, her later flowering into art, and Peacock’s own journeyas a 21st century sympathizer with Mary’s loves and ambitions. What emerges isfascinating both because it is surprisingly and keenly observed, a world whereHandel and Bartram and John Wesley and Lord Baltimore all make cameos, and also because of the linguistic care of Peacock’s own collage.Here’s Peacock drawing herself, by proxy, into fascinated relation with Delany:”Along with the scissors, the scalpel, the bodkin, the tweezers, themosaicks make use of one of the main tools of the poet: simile. By comparingone thing to another, a simile leaves the original as it is—say, just a flower—butit also states what this is like, making a threshold intoanother world.”

Tocall this book small or quiet would be somehow to belittle what Peacock has sobeautifully magnified and made resonant—the triumph of art as a human pursuit,and the curious webs from which both art and craft spring. This book is notflashy, but it is one of the more beautifully constructed and deeply engrossingbooks I have read in some time. It is a keen reminder of what the fruits ofvivid watching—and passionate living—can offer.