The Passage of Power: The Years of Lyndon Johnson, Volume Four

By ROBERT A. CARO 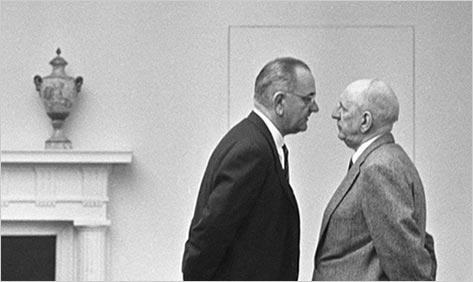 For proof that the greatest stories come from history rather than imagination — that we can best discover the outer limits of the human experience by measuring what those before us have done — we have the lifework of Robert Caro. The author of the multivolume biography The Years of Lyndon Johnson has won shelves of awards, and they are well-deserved. The series’ fourth huge volume, The Passage of Power, has just arrived to much fanfare, ten years after its predecessor, Master of the Senate. The fanfare, too, is well deserved. The Passage of Power is easily the best biography I have ever read.

The book spans six years: from 1958, when Johnson prevaricated about whether to run for president, to 1964, when the transition to his inherited presidency was complete. Particularly dramatic are the forty-seven days between John F. Kennedy’s assassination and the 1964 State of the Union address. During those seven weeks Johnson seized the reins of government with both hands and spurred the dozing horses to a gallop, accomplishing business that had stymied his predecessor. The achievement is all the more remarkable considering the self-pitying stupor in which Johnson was languishing at the time of his sudden ascension. Here, in Caro’s operatic but not overstated terms, is the arc of the story:

It rises from the depths of a man’s life, a period in which utterly without power he stands naked to his enemies, a period in which a man who dreads above all else what he calls “humiliation” suffers what he dreads day after day. It sweeps up to the heights of that life, as he is catapulted in an instant, in a gunshot, into the power he had always wanted — and he proceeds to demonstrate, almost in the instant he attains that power, how much he is capable of accomplishing with it.

The low point marked here was Johnson’s tenure as Kennedy’s vice president, during which he walked the halls aimlessly with nothing to do, forlorn as a castrated bull. Caro contends that after Johnson’s unsuccessful 1960 presidential bid, he accepted the Democratic vice presidential nomination in no small part because statistically, vice presidents have a better chance of becoming president than anyone else. Like all of Caro’s claims, this one is backed by meticulous research, in this case several comments Johnson made in private conversations. Yet the cost of Johnson’s decision was high: he had to trade in his Senate majority leader’s gavel for an empty portfolio. Kennedy excluded him from important meetings and decisions, and the White House staff — “the Harvards” — openly mocked Johnson for a rube: a “Rufus Cornpone” from Texas, with big ears and no style. They called him Lyndon rather than Mr. Vice President and made him travel on cut-rate planes. Wary of a diplomatic incident, Kennedy forbade him to visit the Soviet Union.

And then there was the attorney general. Robert F. Kennedy hated Johnson passionately, and Johnson hated him back. Theirs is one of the great feuds in American politics, and Caro describes it masterfully. The feud’s causes were legion: Kennedy’s slight of Johnson in a Senate cafeteria in 1953; Johnson’s swipes during the 1960 primary campaign that Bobby’s father had appeased Hitler; Kennedy’s attempts to talk Johnson out of accepting the vice presidential nomination; Johnson’s brusque treatment of the attorney general immediately after the president’s death. Bobby kept a Lyndon Johnson voodoo doll and stuck it with pins; Johnson swore of Bobby, “I’ll cut his throat if it’s the last thing I do.” But the lopsided dynamic between them underwent a sudden reversal when Johnson became president. Between the grand scale of the personalities and the historic intermingling of familial and political drama, Caro finds a Shakespearean perspective irresistible: “The President, the King, was dead, murdered, but the King had a brother, a brother who hated the new King.”

Johnson was the very picture of bold command in the hours and days after the president’s assassination, transforming instantly from a shuffling droop into a confident leader. He made decisions quickly and calmly, from ensuring the continuity of government to determining whether an attack against the United States was underway. He worked the phones. He arranged for Jackie Kennedy to stand beside him as he took the oath of office aboard Air Force One, in order to reinforce the legitimacy of the transition. In a remarkable feat, he convinced Kennedy’s cabinet and senior staff to stick with him to a man. He worked over each one, appealing variously to vanity, duty, guilt, and patriotism — and thereby getting the better of eggheads who had severely underestimated him. He addressed the nation, giving the speech of his life, which began on just the right somber note: “All I have I would have given gladly not to be standing here today.” Americans saw that they had an able new president and realized that their government had survived a trauma.

And then Johnson turned to face Congress, like an emeritus conductor reclaiming his old podium. Caro describes Johnson’s legislative maneuvers from late 1963 to early 1964 as a display of “political genius almost shocking in its acuity and decisiveness,” and Caro’s rendition of it is spellbinding. Johnson bucked his staff and vowed to pass the civil rights bill that southern congressmen had been obstructing for five months. His decision was a combination of genuine empathy for the downtrodden and recognition that he needed support among liberal Democrats for the election that already loomed. Putting his full weight behind the effort, Johnson passed the Civil Rights Act of 1964, breaking an epic filibuster and a congressional logjam that had completely stalled President Kennedy’s agenda. He deployed a masterful series of parliamentary tactics and flattered, bribed, and threatened congressmen until they came over to his side. Using the same nimble tactics, he also passed a contentious tax bill and agricultural agreement with the Soviet Union. His triumphs on Capitol Hill quickly established that he would be no caretaker president. The newspaper columnist James Reston wrote that “President Kennedy’s eloquence was designed to make men think; President Johnson’s hammer blows are designed to make men act.”

A daunting amount of material remains for Caro’s final volume. Medicare and Medicaid, the Voting Rights Act of 1965, more sparks with Bobby, the tragedy of Vietnam, and Johnson’s decision not to seek reelection in 1968 all loom. Caro has hinted that he will deal harshly with Johnson on the final years of his presidency. LBJ’s ruthlessness, mendacity, and secretiveness are all on display in The Passage of Power, too — for instance, his appalling efforts to silence his critics in the press. Yet the book does chronicle Johnson’s finest hour, and in it Caro demonstrates tremendous admiration for his subject. But what one takes away from this volume, more than sympathy or disapproval, is Caro’s thorough understanding of his man: of his fears and shortcomings, and of his tremendous ability to wield political power. Finishing a book this satisfying leaves only one anxiety: that Caro, who is seventy-six, will live to complete his extraordinary project. Even if he doesn’t, it is already a masterpiece.