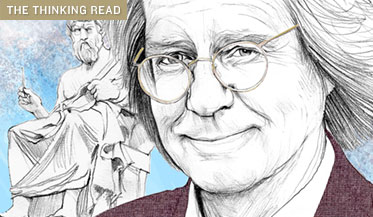 In the days when Jean Piaget and Sigmund Freud dominated thinking about child development, small children were thought to be irrational, incoherent, and solipsistic in their thinking and both easily distractible and unfocused in their awareness of the world. Recent work in developmental psychology offers a sharply contrasted picture. “Children are unconsciously the most rational beings on earth,” says Alison Gopnik, “brilliantly drawing accurate conclusions from data, performing complex statistical analyses, and doing clever experiments.” And not only does empirical work reveal this about babies and small children, but what is thus revealed throws light on some of philosophy’s more intriguing questions about knowledge, the self, other minds, and the basis of morality.

Such are the claims made by philosopher and developmental psychologist Alison Gopnik in this fascinating account of the growth of child minds. Gopnik’s affectionate and sympathetic enjoyment of the way children think in their first five years is manifest throughout her book, but so too is her sensitivity to the deeper philosophical implications of what their way of thinking can teach us. The result is absorbing and educative. This is despite the fact that, at times, it seems as if developmental psychology provides arduous scientific confirmation for what parents and preschool teachers have always long known; but Gopnik is skilled at producing the rabbit of insight from an apparently old hat. And there is also much that is new and surprising in the field, all of it promising to change our understanding of mind in general.

Gopnik describes how imagination contributes to the vast amount of knowledge that children acquire in their first few years. Accumulated knowledge allows children to think of alternative ways that the world could be, which in turn helps them to construct mental maps of the causal relationships that govern and explain how things work. Imagination also aids them in forming ideas about how other people think and why they act as they do. Many children have “imaginary friends”; their ability to understand others and to change themselves is aided by the possibilities for exploring alternatives that such play affords.

This learning proceeds, says Gopnik, in ways that a scientist would recognize as familiar: by experimentation and recognition of statistical patterns. In the child the application of these methods is unconscious and instinctive, and it is aided by the presence of caregivers who provide active instruction. But the basis of child learning is no different from the more conscious and deliberate methodology of adult enquirers.

Studies of child development also suggest insights into consciousness, one of philosophy’s most recalcitrant mysteries. Children appear to have a far more vivid awareness of the world around them than adults do, Gopnik, reports, because an adult’s “spotlight awareness” that enables concentration on specific features of an environment involves losing the “lantern awareness” that brings the whole environment to the forefront of attention. This childhood form of awareness is likened by Gopnik to how adults feel when they visit a foreign country; they focus less on particulars and experience everything more globally because so much is unfamiliar. But whereas children have a more intense lantern awareness, they also have less inner consciousness of the kind that helps manufacture a distinctive sense of self, that autobiographical centre of memory and planning which is the “me” in all experience. That explains why they have less command of their behavior, and less sense of the future.

One of the most interesting parts of the book concerns the basis of morality in early childhood development. Gopnik describes empirical investigation into the capacity shown by babies and toddlers for empathy and altruism, and into early childhood understanding of harm and the nature of rules. It is often observed that children have an acute sense of fairness; experiments clearly show that they know how others feel, and act on that knowledge.

These insights into notions of selfhood and morality add weight to Gopnik’s conclusion that the relationship between children and parents is one of the chief producers of value in our experience. This extends, says Gopnik, even to saying that because in a quite literal sense “children are our future,” they give us the closest thing we will ever get to immortality.

Indeed, Gopnik does not shy away from saying that talk of knowledge, the counterfactual construction of causal mental maps, and the role of caregiving in the development of children’s minds, is in effect talk (albeit “more poetically” put) of truth, imagination and love. These philosophical dimensions of what developmental psychology tells us is what licenses the implied claim in the book’s subtitle, that understanding how children’s minds grow is to see into the meaning of life.

There is much in Gopnik’s survey of child mental growth that is indeed philosophically suggestive. To pick one of the most interesting out of many: the idea that conceptions of selfhood come relatively late in development, and have to be achieved because they are not given as part of the child’s innate endowment. In part the point turns on the way memory works and how children access and use it, and in part on the absence of the inner consciousness, the feeling of an observer within that is distinctive of selfhood in older children and adults.

This inner consciousness is related to the possession of “executive control,” the ability to locate oneself and therefore one’s interests in a past-and-future continuum, making it easier to defer gratifications and follow a chosen path. Relative absence of a sense of self is associated with the “lantern” form of awareness mentioned before; a young child’s inner consciousness, says Gopnik, “may be more like wandering than voyaging, a journey of exploration rather than of conquest.”

Some of what Gopnik asserts will undoubtedly prompt questions, as when she says, “All the processes of change, imagination and learning, ultimately depend on love.” Someone might argue that many unloved children have turned into highly imaginative individuals. Even more to the point, many children in history were, and in developing societies still are, not cared for by loving parents but by older siblings, grandparents, wet-nurses, nannies — “alloparents” — where love (not guaranteed) is not romantically conceived mother love, and where childhoods were, and in those contemporary societies still are, not prolonged or free. Even in developed countries it is only in very recent historical times that childhood has ceased to be short and circumscribed. In many developing countries today children are set to work at exceedingly young ages, fetching and carrying or tending goats — or babies.

This does not affect Gopnik’s thesis about the capacities for imagination, learning and plasticity that characterize the developing mind, but it shows that these processes occur in many different social environments for young children, and not just the close and extended nurturing environment of most homes in the contemporary affluent West.

In fact it might be that the capacity of people to survive deprived or mentally undernourished childhoods is as interesting as the role played by loving upbringings in promoting self-confidence and security. It is sometimes observed that creative people and high achievers are as they are because they are compensating for the lack of what ought to typify an ideal childhood.

A general worry about developmental psychology is that it is always at risk of “reading-in”, that is, imputing to very small children some of the intentional interpretations which make sense of the adult observer’s own world. The temptation to do this is itself a hard-wired instinct. Consider: humans anthropomorphize not only other animals but even inanimate things, attributing agency, intention and volition to them. It feels all the more natural to do so with human babies, who are after all destined to be exactly the appropriate subjects for our agency-attributing interpretations. Think of the excitement over baby’s first smile, which is in fact most likely to be the facial rictus of flatulence. Is that what baby-lab observers are doing when they deduce an interpretation of an infant’s cognitive abilities from, for example, how long it attends to a given stimulus: are they seeing smiles where there are only grimaces?

The experiments reported by Gopnik, some of them her own work, reduce the anxiety about reading-in; they are careful, well-designed, and sensitive to the danger of misinterpretation and misattribution. Still, one is reminded of this danger when one reads “even nine-month olds understand some important statistical ideas” and (said in denying that mimicking actions is a mere mirror-neuron response) “babies don’t just imitate actions, they recognize and reproduce the results of those actions.” This seems to go too far; a nine-month old baby might be hard-wired to respond to patterns, but it would be exceedingly difficult to establish that she “understands important statistical ideas.” Likewise to say that babies “recognize” as well as reproduce actions is a challenging claim, for “recognize” seems to imply something that an individual can consciously represent to herself as doing.

A matter that Gopnik does not address is that there is a downside to the readiness with which young minds imagine and believe. Credulity of course is of great evolutionary advantage; if older people in authority say that fire hurts you, tigers eat you, and the gods are recording your every sin, the child will believe, and occasional rebellion will (at least in such cases as a finger in the candle flame) confirm, what they have been told. Astute educators have always recognized that if they can espalier the young mind it will more likely than not keep that given shape thereafter. The Jesuits’ mot was “give me the child until the age of seven and I will give you the man.”

Again, this does not controvert the research findings that Gopnik reports. Her aim is to describe how infant mentality develops, and what we can learn from this; and she does it with great sympathy and clarity, in an account rich in insights and brimming with suggestions about how the swift and hungry growth of child minds can illuminate the human mind in general.