The Physics of Sorrow

One of the biggest challenges for most storytellers is the nature of story itself. Ideas and characters may spring from the imagination, but without structure they make for a collection of aphorisms and anecdotes. Novels are the products of networks of details that have been given direction and purpose by their authors; the cliché about being swept up by a good book affirms this.

But that insight just leads us to a bigger question: how is it that formally experimental writers can sometimes pull us into a different kind of fascination, one that emerges despite the difficulties their narratives throw in our way. The Bulgarian writer Georgi Gospodinov is one of the conspicuously ludic. “I am books,” says the narrator in Gospodinov’s The Physics of Sorrow. The reader is made to brush against the rivets of its structure from the beginning.

I was born at the end of August 1913 as a human being of the male sex. I don’t know the exact date. They waited a few days to see if I would survive and then put me down in the registry . . .

I was born two hours before dawn like a fruit fly. I’ll die this evening after sundown.

I was born on January 1, 1968, as a human being of the male sex. I remember all of 1968 in detail from beginning to end. I don’t remember anything of the year we’re in now. I don’t even know its number.

I have always been born. I still remember the beginning of the Ice Age and the end of the Civil War. The sight of the dying dinosaurs (in both epochs) is one of the most unbearable things I have seen.

I haven’t been born yet. I am forthcoming. 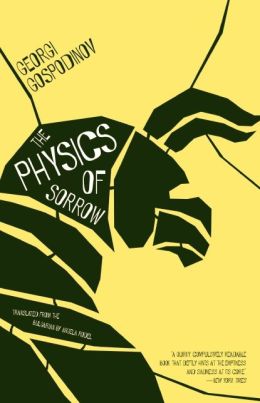 Gospodinov’s opening — the reader hardly knows whether these are discrete characters or a ventriloquist’s warm-up — may initially seem like a plane taking off on a bumpy road. But soon it becomes clear that the author is at pains to mark off a space in which he can follow multithreaded interests in biography, history, and myth. At the nexus of these convolutions is the Minotaur whose image has captivated the narrator — the man born in 1968, the same year as Gospodinov — ever since he puzzled over its character as a young child when he heard his father say, “We hang around like Minotaurs in these basements, to heck with their . . . friggin’ housing fund and lists.”

Gospodinov tunnels into the legend of the Minotaur, tracing the lineage of the myth from Ovid to the video game series God of War and beyond. In so doing, he argues that the Minotaur has been defamed throughout the ages. Instead of the rapacious beast of legend that demanded seven maidens and seven youths every nine years from the Athenians to quell his appetite for human flesh, Gospodinov sees an abandoned child, locked away in a labyrinth, by a man who incurred the anger of Poseidon. It was the god of the sea who engineered it so the man’s wife fornicated with an animal and gave birth to an infant with the head of a bull. “Later,” Gospodinov writes, “the myth will transform the child into a monster, so as to justify the sin of his abandonment, the sin against all children, whom we will abandon in the future.” He also points out that bulls are herbivores.

By endeavoring to give voice to the voiceless Minotaur, Gospodinov stacks his reflections one inside the other like a matryoshka doll, or a Trojan horse, or a son in utero who carries within him the genes of an ancestor. The Minotaur proves a symbol capable of housing all sorts of vignettes — such as a family legend about a downtrodden mother who almost abandoned her son in 1917 or the narrator’s intuition that his grandfather, the said woman’s son, abandoned a child born in the aftermath of the Second World War.

There is a great deal of warmth to this activity, more than one might infer from the novel’s beginning. Gospodinov places himself on the side of the ephemeral and the small, even as he looks toward the novel’s chimerical immortality.

If something is enduring and monumental, what is the point of putting it in a capsule? Only that which is mortal, perishable, and fragile should be preserved, that which is sniffling and lighting matchsticks in the dark. . . . Now that’s what will be in all the boxes in the basement of this book.

That the incidental and the mythical should mix in a way that doesn’t feel ponderously Joycean is a commendable literary accomplishment. As is the tingly, open-ended feeling that The Physics of Sorrow leaves one with — the sense that there is nothing the novel cannot hide.