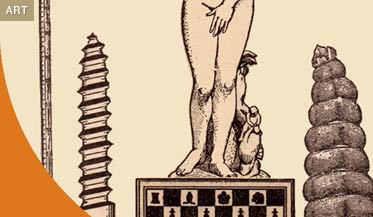 Right before one goes to sleep, and just after one wakes up, the mind is as supple as a wind-plucked reed. During these intervals where fancy scampers aloft, the drag of everyday perception abates. Andrei Codrescu’s outstandingly modulated essay, The Posthuman Dada Guide: Tzara & Lenin Play Chess, courts this state as it polkas around three imaginative conjectures: First, what if Tristan Tzara (1896–1963), a Romanian Jew who some believed was the founder of the Dada movement, played chess on October 8, 1916, with Vladimir Ilyich Lenin, (1870–1924)? Second, what are the symbolic ripples of such a matchup, if Lenin can be seen as a representative of a rationally motivated revolution that sought to perfect humanity by placing it under the thumb of the state, and Tzara can be seen as an artistic revolutionary who tried to liberate mankind from all stultifying institutions? Third, assuming that our technocratic age prides itself on rationality, efficiency, and increasing degrees of automation, might not the free-for-all, impossible-to-discern-on-your-GPS energies of Dada — the art form that scoffs at all prescriptions/definitions — be used for our collective good to shock us out of our fill-in-the-blank routines? Judging from the book’s design, clearly Codrescu’s academic publisher has high hopes that it will have broad appeal. The Posthuman Dada Guide is a slender, tower-shaped book whose pages have generous margins; its text is divided into small chunks of alphabetically organized subjects, which lend to the impression that it’s intended for easy transport and frequent consultation. Based on my own experience — I’ve read portions of the book at least three times now — it seems that this is a work with a very long tail that will trip people up for many moons to come.

Previous Previous Post: How Rome Fell: Death of a Superpower
Next Post: The Means of Reproduction: Sex, Power, and the Future of the World Next