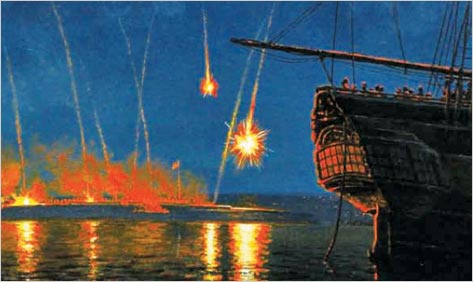 This year, Americans have had an abundance of ways to commemorate the 150th anniversary of the Civil War—books, conferences, ceremonies, reenactments. That war is unique in our history, many Americans would say, because it is the only one ever fought on American soil. But it isn’t. Next year, in fact, will mark the 200th anniversary of a war that saw foreign troops occupy parts of the U.S., from Michigan to Maine to Louisiana, and put the White House and Capitol to the torch. Yet the War of 1812 has always been the Rodney Dangerfield of America’s wars, doomed to get no historical respect. We will certainly spend more time in 2012 marking the sesquicentennial  of Shiloh and Antietam than the bicentennial of Tippecanoe or Queenston Heights.

The Rockets’ Red Glare: An Illustrated History of the War of 1812 (Johns Hopkins), by Donald R. Hickey and Connie D. Clark, offers a perfect way to redress the balance. Sized for the coffee table and full of color reproductions of paintings and maps and broadsides, it also offers an accessible narrative of what may well have been America’s least necessary war.

By the summer of 1812, America’s grievance against its former imperial master had been building for years. With the Napoleonic Wars raging in Europe, Great Britain put a blockade on neutral trade with the French-dominated Continent, which crippled American commerce. Even worse, as far as national pride was concerned, was the British practice of impressment—stopping American ships and seizing their crews to work on Royal Navy warships. These issues led Congress, urged on by President James Madison, to declare war on Britain on June 18th.

The Americans had not yet heard that, two days earlier, Parliament had revoked its blockade, thus taking a major cause of the war off the table. Had they known, the declaration of war would probably not have passed; one might say, then, that the War of 1812 began with a miscommunication. Indeed, within weeks the Americans were sending out peace feelers to the British. But the war would stretch on for two and a half years, with little glory on either side.

The Americans, urged on by “war hawks” like Henry Clay, thought that Britain would be forced to its knees by a quick invasion of Canada. But as Hickey and Clark show, the American army was not up to the job. Badly led and full of untrained, short-term recruits, it could make no headway against the tough British regulars who guarded the border. On the other hand, a series of naval victories for the U.S., on the Great Lakes and the Atlantic, fed national pride but did nothing to hurt Great Britain, then by far the world’s greatest naval power.

When the war finally dragged to an end, the Treaty of Ghent provided for a return to the “status quo ante bellum”—that is, the whole fight was for nothing. Ironically, it was not until after the treaty was signed that a force led by Andrew Jackson won the only major American victory of the war, the Battle of New Orleans, in January 1815. At the end as in the beginning, confusion reigned supreme.

The oddest thing about the War of 1812, Hickey and Clark explain, is that such a small-scale, badly managed war produced so many of America’s lasting patriotic symbols and slogans. The USS Constitution became “Old Ironsides” during its victory over HMS Guerriere; Captain Oliver Perry sailed into battle on Lake Erie under a flag emblazoned with “Don’t Give Up the Ship,” and after defeating a British squadron he sent back the terse report, “We have met the enemy and they are ours.” Uncle Sam was born during the War of 1812, probably as a result of “a growing number of manufactured goods that were stamped with the initials ‘U.S.,’ ” though he would not become the familiar white-bearded old man until the 1870s. Finally, of course, the War of 1812 gave us our national anthem, “The Star Spangled Banner”: the words come from a poem written by Francis Scott Key as he observed the unsuccessful British assault on Baltimore in 1814.  If only for that reason, the War of 1812 deserves a place in our memory.

With the Republican presidential primary already heating up, it’s not too soon to start reading The Almanac of American Politics 2012 (Chicago), the annual installment of Michael Barone and Chuck McCutcheon’s bible for political junkies. Entries on every state and congressional district, plus analysis of the 2010 election, make it an indispensable book for amateur and professional handicappers.

In The Battle of Midway (Oxford), naval historian Craig L. Symonds offers a definitive, moment-by-moment account of the pivotal World War II battle, in which American forces sank a Japanese carrier group and broke Japan’s dominance in the Pacific Ocean, at a high cost in American lives.

Models, once anonymous manikins for clothing designers, have become celebrities in their own right. But in Pricing Beauty: The Making of a Fashion Model (California), sociologist Ashley Mears—herself a former model—shows that the pretty face is just the final product of a complex industry whose economic and cultural workings are usually hidden from the public.

Previous Previous Post: Melville and Maugham
Next Post: Rin Tin Tin: The Life and the Legend Next