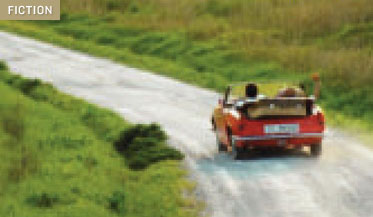 Sylvia Landsman, the narrator of Binnie Kirshenbaum’s The Scenic Route, announces herself briskly near the beginning of the novel: “There I stood: five feet, six inches tall, forty-two years old, divorced, no children, without — for all practical purposes — any family, and now, let go. Unemployed?.” What to do? She takes her severance money and heads to Fiesole, where she meets Henry Stafford, an American from North Carolina living in Paris, who explains he is nursing a broken heart. “Birds of a feather,” Sylvia thinks. “We had money in our pockets and time on our hands. It was that easy.” Except Sylvia, being a Binnie Kirshenbaum creation, knows nothing is ever easy.

In six novels and two story collections Kirshenbaum has created a series of distinctive, mostly comic heroines. There’s sexy poet Lila Mostowitz (Pure Poetry), who writes “smut and filth in terza rima,” and biographer Hester Rosenfeld (Hester among the Ruins), whose affair with her German research subject slides along the razor’s edge of moral ambiguity. There is the married woman involved in multiple affairs (adultery) while breaking six more of the ten commandments in her novel A Disturbance in One Place. The heroine of her most recent novel, An Almost Perfect Moment, has, like Kirshenbaum, a gift for the poignant detail. She describes her mom as pushing 239 pounds but beautifully groomed. “Every Thursday, she was at the beauty parlor for her wash and set, forty-five minutes under the dryer, hair teased and sprayed into the bouffant of her youth,the same hairdo she’d had since she was seventeen, only the color had changed from a God-given warm brown to a Lady Clairol deep auburn.”

In The Scenic Route (yes, it’s a road trip novel), Sylvia and Henry meander by car through the new, boundaryless Europe. At first they drive from Trieste to Venice to Kraków to Berlin (in a witty reverse spin, Sylvia describes the Kurfürstendamm as “a broad tree-lined avenue like the Grand Concourse in the Bronx, where my father grew up”). Henry’s wealthy wife has gone to India to spend time with her guru, leaving him to focus only on Sylvia and the stories she spins. “Other people, they were the stuff of stories to tell?stories we told each other to entertain ourselves, to explain ourselves, to be.” Sylvia shares her store of memories with Henry — of growing up in Westchester, where the neighborhood bully killed her turtle with a hammer; her hatred for her brother Joel, her mother’s death, her father’s reunion with a former girlfriend her mother had hated, his later accident and loss of long-term memory.

She also makes numerous leisurely, sometimes tedious Wikipedia-style asides — on Alma Mahler, “The Most Beautiful Woman in All of Austria”; Pierre-François Guerlain, founder of the “perfumer to the stars,” whose grandson created Shalimar, her mother’s signature perfume; and the Blumenthal brothers, who introduced Raisinets in 1927. In one head-spinning passage, she segues from lovemaking in a forest, interrupted by Norwegian tourists who mistake her cries of passion for calls for help, to the battlefield at Verdun, where her grandfather broke his ankle. He survived the war, but it left him “twisted with disgust, with loathing and contempt for humanity.”

The things of life, and how they connect her to others, seem to be the only constant for Sylvia. Insisting that she inherit her grandmother’s partial set of china, she notes, “These things that I treasure, they are not things merely owned but things attached to me, each by a thread, and the threads crisscross like cobwebs.” When her marriage breaks up amicably after four years, she is surprised her husband doesn’t want anything to remember her by. “You keep it,” he says. Her time with Henry is marked by a gathering of small gifts — a Cinzano ashtray, an amber ring from Kraków, a snow globe, a necklace made of glass beads from Prague that brings to mind stories of her mother’s aunt Semille, in whose memory she was named, and her affection for glass beads.

Running in counterpoint to the desultory tension of Sylvia’s affair with Henry is the serialized story of her sisterly friendship with Ruby, a southerner with bipolar tendencies who almost dances herself to death (triggering an aside about Arthur Murray, né Moses Teichman, that I could have done without). Ruby is the friend Sylvia turns to when her mother has died and her father is overwhelmed, and someone needs to clear out her things — “her dresses on hangers, the row of pocketbooks on the top shelf, her shoes poised on racks, toes aimed skyward. Her toothbrush, her hairbrush….” Ruby’s manic maxing-out on credit cards and later downward spiral into depression worry Sylvia silly.

Indeed, the evidence is that Sylvia’s bond with Ruby is far stronger than her feelings for Henry, who serves mostly as audience, lover, and provider of meals (“fat rolls covered in poppy seeds, yellow pats of butter cut like cookies, raspberry jam, soft boiled eggs?”) and rooms in fine hotels and châteaux. Indeed, to her chagrin, she realizes at one point that Henry is a man who could be “undone by one night in an unpleasant hotel room.”

Before long, Henry has a long phone call from his wife, and the summer’s end is in sight. As she winds up her tale of human affinities and foibles, Sylvia Landsman turns out to be a tad bit wiser and more self-aware than upon first meeting. The Scenic Route concludes with a few dramatic hairpin turns, with unexpected betrayals — and betrayers. Throughout, Kirshenbaum’s pacing is superb, her instinct for the heart of the story unerring.